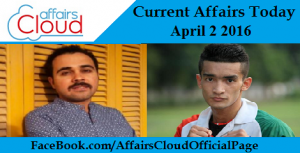 President Pranab Mukherjee has implemented the Uttarakhand Appropriation (Vote on Account) Ordinance, 2016 which sanctions expenditure that has come under direct federal rule because of a political crisis.

Maharashtra signed MoU with the Tata Trusts to link all government colleges and medical colleges to the national cancer grid for uniform cancer profiling and quality treatment.The initiative targets to have 50,000 bone marrow donors in the next three years.

Union government has approved Goa’s coastal circuit project under the SwadeshDarshan Scheme, Goa will soon be allocated funds for development projects to be undertaken in the first phase along its coastal belt.

The Right to Fair Compensation and Transparency in Land Acquisition, Rehabilitation and Resettlement-Gujarat Amendment Bill- 2016 was passed in the Gujarat Assembly on 31 March.

The Department of Space (DoS) and Airports Authority of India (AAI) have signed a pact todeliver scientific considerations for airports’ construction in India.

It would be an appropriate benchmark for mutual fund schemes which predominantly invests in small-cap and mid-cap companies equity stocks.

Union finance ministry imposed the Safeguard duty of up to 20 percent on steel imports until March 2018 to protect domestic manufacturers from cheap Chinese imports. 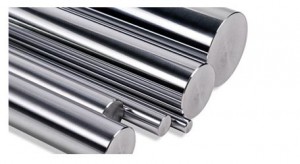 Ranveer Singh honoured as “Maharashtrian of The Year”

Bollywood actor Ranveer Singh, who started his career with romantic comedy “Band Baaja Baaraat” in 2010 has been conferred with “Maharashtrian Of The Year” award. On the other hand, the “lifetime achievement award” was bestowed upon 82 year old legendary singerAsha Bhosle. 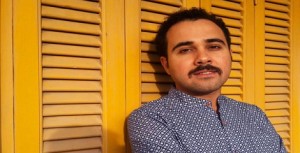 The prestigious PEN/Barbey Freedom to Write Award, presented by PEN America has been conferred upon, jailed Egyptian author and journalist, Ahmed Naji.

Masakui appointed as Ambassador to Zimbabwe

Masakui (IFS: 2001), presently Director in Ministry of External Affairs, has been appointed as the next Ambassador of India to the Republic of Zimbabwe. He will succeed Surinder Kumar Datta. He is expected to take up his assignment shortly.

Shubhdarshini Tripathi (lFS: 1994), presently Deputy Chief of Mission in Berlin, has been appointed as the next Ambassador of lndia to the Hashemite Kingdom of Jordan. Ms Tripathi will succeed Anil Trigunayat. She is expected to take up her assignment shortly.

Nandini Singla (IFS: 1997), presently Joint Secretary in the Ministry has been appointed as the next Ambassador of India to Portugal. She is expected to take up her assignment shortly.

Shri Satender Kumar, Ambassador of India to the Republic of Suriname, has been concurrently accredited as the next High Commissioner of India to Barbados with residence in Paramaribo. He is expected to take up his assignment shortly. 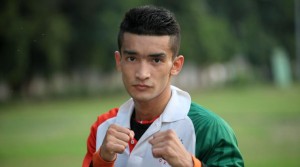 Indian boxer Shiva Thapa bagged silver medal after losing in the final of the Asian/Oceania Qualifying Tournament.Assam grown boxer went down 0-3 to Thailand’s ChatchaiButdee in the summit clash.

Eminent journalist Babu Bharadwaj passed away at a private hospital in Kozhikode.He was 68.

World Autism Awareness Day is an internationally recognized day on the 2nd of April every year. World Autism Day is also one of only four official health-specific UN Days.