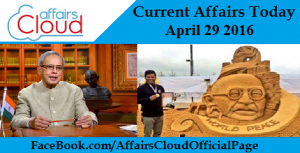 India hosts the Minister of Foreign Affairs of Mongolia “LundegPurevsuren” on a three day visit.

Capital of Nagaland Kohima city was declared a smoke-free area by Deputy Commissioner Rovilatuo Mor with this capital city will be greener, healthier future.

Union government is mulling to make it mandatory to allot 1 per cent of total cost of any highway project for road safety.

State Cabinet chaired by Chief Minister Mehbooba Mufti sanctioned a grant of 5% interest subvention with the effect from 1st April, 2016 with a limit of Rs 5 Lac per unit for a period of four years.

Rahuri in Ahmednagar becomes first to have digi-locker

Tele Communications Minister Ravi Shankar Prasad asked all the municipal bodies to adopt Digi Locker facility where citizens will have access to all these documents at any time that help in digitalizing governance and make administration paperless.

The Development of North Eastern Region (DoNER) Ministry will earmark Rs 33,000 crores for development of the north-eastern states during the present fiscal. 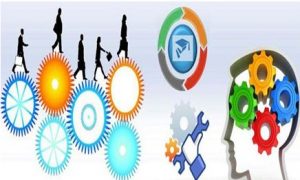 The New Delhi based Indian Air Force top pilots and jets participating in the Exercise Red Flag are kept ready to go for the kill during the Main Conduct Phase.

The prestigious exercise is to demonstrate aerial exercise that features the best pilots and aircrafts across the globe.

Canada based Mobilephone maker BlackBerry and Digitsecure a payments platform have jointly to bring BBM Money to India. It is noted that service is limited to inter-BBM transfers.

Central Board of Direct Taxes has released a hard data on the total number of taxpayers in the country. This is the first time the board released such details.

Politician NK Singh will be awarded with Japan’s Second Highest national award for his contribution towards Indo-Japan economic relations over 10 years more.