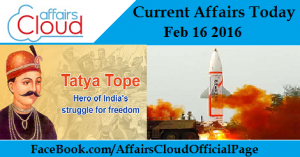 The Government of India had unveiled the National Capital Goods Policy under the Make in India apparition.

Memorandum of understanding (MoU) had been signed between the ministry of railways on and the government of Sweden on technical cooperation in Rail Sector for getting best international technology along with investment.

The Food Processing Sector in Jharkhand gets its first Mega Food Park in the State which will directly beneficial for about 25,000 – 30,000 farmers.

India had signed an agreement with the United Kingdom (UK) on exchanging information about criminals.

The government of India will distribute Rs. 14 crore to Soil Health card in the country by March 2017 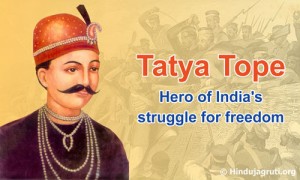 The Ministry of Culture with the support of Nehru Memorial Museum and Library organized a Special Lecture and a National Conference as part of “Commemoration of Tatya Tope’s 200th Birth Anniversary”.

Dr.Rajesh Tope, one of the fourth generation descendents of Tatya Tope, explored Tatya Tope’s Operation Red Lotus in 1857 as a Maratha-Mughal alliance against the British and highlighted that 1857 was a Battle that was lost, but the War was won.

The first Silk Road train arrives in Tehran to connect China and Iran arrived in Tehran.The train is carrying 32 containers of commercial products from eastern Zhejiang province.The track is completed in 14 days.

Sindh become the first Pakistani Assembly to adopt the Hindu Marriage Bill by allowing the minority community to register their marriages.

In accordance with the Monster Salary Index (MSI) report, Information Technology sector in India is the highest paying sector with a median gross hourly salary of Rs 346.42. On the other hand, Indian manufacturing sector stood at last as it pays the least at Rs 254.04.

The Reserve Bank of India (RBI) had announced the liquidity measures for March 2016 for a combination of appropriate instruments and for adequate additional liquidity infusion.

Nomura had reported that the India’s GDP growth will likely to clock at 7.8% growth in year 2016.

The 2016 Grammy Awards ceremony was held at Staples Center in Los Angeles, California to recognize the best recordings, compositions and artists of the year.

After the recently announced “Swachh Sarvekshan-2016”, Union Minister of Urban Development Shri M.Venkaiah Naidu conferred the trophies and mementos to 15 cities from across the country in recognition of their work in improving sanitation in urban areas.

An Indian origin couple both aged 99 who have taken part in India’s freedom struggle, have been awarded New Zealand’s longest married couple by a group 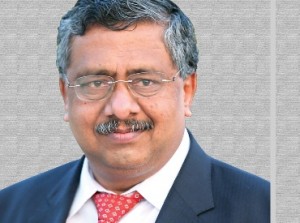 Devaraja Reddy as appointed as the president of Institute of Chartered Accountants of India (ICAI) who has been a chartered accountant for 28 years.He has as Vice President of ICAI for the Council Year 2015-16.

India’s indigenously developed Prithvi-II missile had been successfully test-fired from the Chandipur, Odisha.

The 12th South Asian Games 2016 title has been clinched by India, which were held atGuwahati and Shillong, India from 5 February to 16 February 2016.

Dominic Thiem an Austrian tennis player wins the Buenos Aires Title over the Nicolas Almagro a Spanish professional tennis player by 7-6 3-6 7-6 in the Argentina Open.