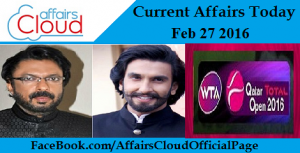 The nation’s first gender park to come up in the India’s Digital state Kerala, and it will be inaugurated by President Pranab Mukherjee in Kozhikode.

Seismic Microzonation reports for Delhi and Kolkata has been released by Union Minister for Science & Technology and Earth Sciences Dr. Harsh Vardhan in New Delhi.

Department of Industrial Policy & Promotion (DIPP)’s expert committee to examine the possibility of replacing multiple prior permissions with pre-existing regulatory mechanism has submitted its recommendations aimed at promoting ease of doing business in the country.

The movie ‘Neerja’ starring Sonam Kapoor in the lead role has been declared tax free in Delhi and UP followed by Maharashtra and Gujarat. The movie is based on the real life of Neerja Bhanot .

Bolivian president Evo Morales lost his fourth term referendum to continue in office. He has been defeated for the first time since he came into reign in 2006.

EPFO has tightened norms for withdrawal of Provident Fund as well as investment in Varishtha Pension Bima Yojana.

Union cabinet chaired under PM Narendra Modi gave its approval to promote cashless transactions. The government has many short term and medium term measures to be taken to support this.

UP Government signs pact with OLA 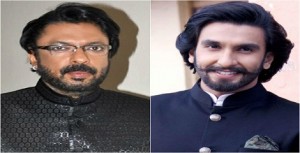 Dinanath Mangeshkar prize will be conferred upon filmmaker Sanjay Leela Bhansali and actor Ranveer Singh. The award will be presented during an event on April 24 that is scheduled to be held in Pune.

Greater Noida based Father Agnel School is awarded India’s greenest School in the Nation. Anil Agarwal founded Centre for Science and Environment have granted the award to the school as part of the Green School Programme promoted by the CSE.

European Football Administrator Gianni Infantino has been elected as FIFA president, He will Succeed Scandal tainted Former president Swiss Sepp Blatter who had led the Body since 1998 suspended from the post for Six years.

Phani N raj has launched Cash-back app Zaggle which benefits the customers through Cash back on every bill they pay at food outlets, the $ 2million has been invested by the company on this initiative.

Gurmeet Singh from Uttarkhand created record that he clocked 1:21:24:57 to clinch Gold Medal against the Rio Olympics Qaulifying Standard of one hour and 24 Minutes in Jaipur Rajasthan.

Mumbai won the Ranji trophy title beating Saurashtra by an innings and 21 runs winning the title for 41st time.

The 14th edition of $2,818,000 Qatar Total Open 2016 was a professional women’s tennis tournament played on hard courts. It was held atInternational Tennis and Squash complex in Doha, Qatar between 21 and 27 February 2016. 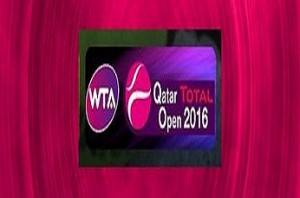 World no.1 legendary pair of Sania Mirza and Martina Hingis has been defeated in the quarterfinals of the Qatar Open by Russian pair Elena Vesnina and Daria Kasatkina by 2-6, 6-4, 10-5.

B K Garudachar the oldest living cricketer of India died at the age of  99. He represented Mysore, United province and Bombay first class cricket matches.