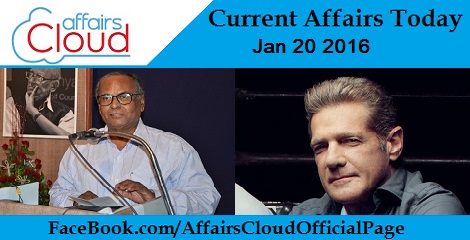 Nearly 65% of the personal income-tax collection in India was through tax deducted at source (TDS).

National Tariff Policy for Electricity gets nod from Cabinet

The Union Cabinet approved the “National Tariff Policy for Electricity” aimed at tightening regulations for setting power rates and promotion of clean energy in a support to Swachh Bharat programme.
(Minister of State for Power – Piyush Goyal)

Union Ministry of Shipping launched the “Project Green Ports”, which is aimed at reducing the pollution levels at ports and managing the sewage treatment at ports.

Green Port Initiative:
It comprises 12 time-bound sub-initiatives, which include acquiring dust suppression system, setting up of sewage/waste water treatment plants and energy generation plans based on the renewable energy resources.

Swachh Bharat Abhiyan:
Under this, the ports will be made cleaner. The focus will be on cleaning the wharf, cleaning and repairing sheds and port roads, painting road signs and zebra crossings and modernising toilet complexes.

Union Minister for Road Transport & Highways and Shipping Shri Nitin Gadkari will inaugurate the 19th National Conference on e-Governance to be held in Nagpur, Maharashtra.

Telangana Government is set to introduce ‘Course Credits’ in Secondary education for students to take part in certain programmes, from the next academic year. These will add up as they move on to higher classes.

Bihar Government has approved 35 per cent reservation for women in government jobs in the state including reserved and unreserved category.

Key Points about the Meeting

The Maharashtra government and Tata Trust signed a memorandum of understanding (MoU) for a skill training programme for the youth. The programme has been undertaken under the state government’s “Kushal Maharashtra, Rojgaryukt Maharashtra” initiative.

Key features of the programme

The top five markets considered as most important for overall growth are USA, China, Germany, the UK and India. INDIA has emerged as one of the five most promising markets for businesses globally as it offers one of the best opportunities for both domestic as well as global companies.

According to the Asia Pacific 2016 Wealth Report, by New World Wealth, India ranked 4th among the top five Asia Pacific countries in terms of number of high net worth individuals (HNWIs) with 2.36 lakh.

As per a report by UK-based charity Oxfam titled “An Economy for the 1%”, the wealthiest 62 people now own half of the world’s population (3.5 billion people), as the super-rich have grown richer and the poor poorer. The report highlighted the global inequality.

The International Monetary Fund (IMF) kept India’s growth projection unchanged at 7.3% in the current fiscal and 7.5% in the next. India would continue to grow at a “robust pace”.

About IMF: The International Monetary Fund (IMF) is an international organization of 188 member countries headquartered in Washington, D.C.

As per Madrid headquartered United Nations World Tourism Organisation, the number of international tourists rose by 4.4% worldwide in 2015 to hit a record 1.18 billion despite concerns over terrorism.

India and the UK agreed to strengthen economic cooperation in various sectors including infrastructure financing, addressing issues of cross-border tax evasion and avoidance.

Microsoft’s charity arm is set to donate $1 billion in cloud computing services over the course of the next three years to non-profits worldwide.

Through the program, Microsoft aims to offer support for over 70,000 NGOs worldwide on its cloud platforms such as Power BI, Office 365, Azure and CRM online in the coming three years.

India has initiated a probe into alleged dumping of rubber variants used for leather goods by the EU, South Korea and Thailand following complaints from Reliance Industries and Indian Synthetic Rubber.

The world’s largest canyon far larger than the Grand Canyon in the United States (in the picture) has been spotted by Chinese scientists who took part in the country’s latest Antarctic expedition to the South Pole.

Eagle’s guitarist Glenn Frey has died at the age of 67. Senior journalist and scholar Aroon Tikekar passed away at 72 due to breathing-related complications.

Recipient of several literary and journalism awards, and was an adjunct professor in the Department of Journalism and Communications, University of Pune.