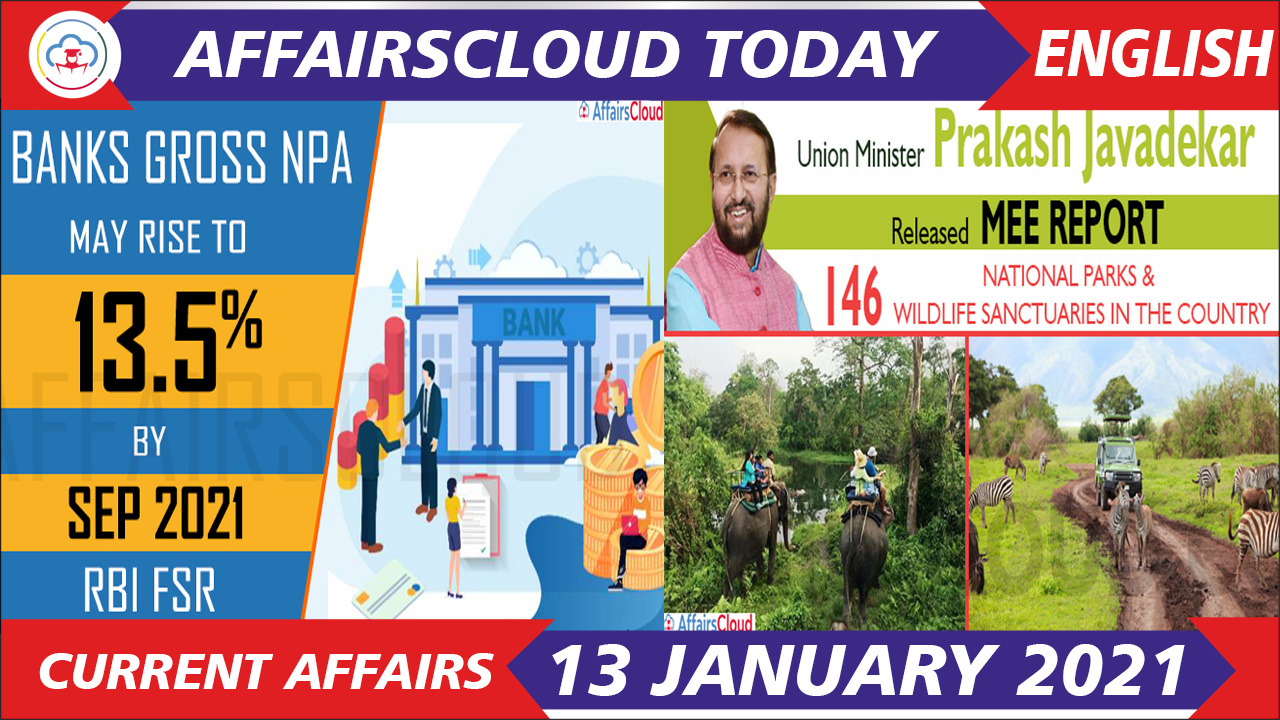 We are here for you to provide the important Recent and Latest Current Affairs 13 January 2021, which have unique updates of Latest Current Affairs 2021 events from all newspapers such as The Hindu, The Economic Times, PIB, Times of India, PTI, Indian Express, Business Standard and all Government official websites. 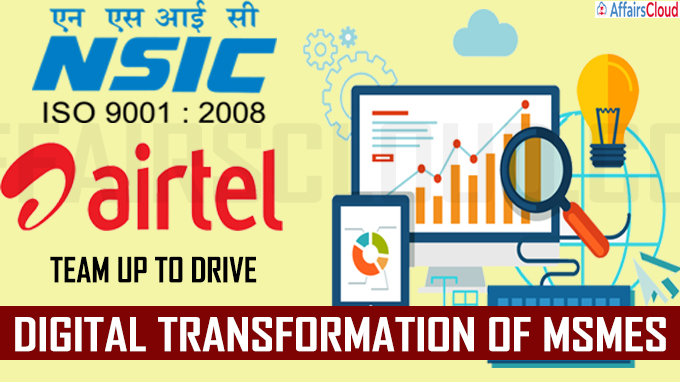 Union Minister for Textiles, Smriti Irani has stated that India has become the 2nd Largest Manufacturer of Personal Protective Equipment (PPE) Kits & Suits, China is the leading manufacturer. India has achieved the feat in a record 3 months’ time during the lockdown caused by Pandemic in March 2020. i.On January 11, 2021, 4th edition of One Planet Summit (OPS) 2021 was virtually organized by France, the United Nations (UN) and the World Bank from Paris (France) to prepare negotiations for setting global biodiversity targets in order to protect nature in next decade.The theme of the summit is “Let’s act together for nature!”.
ii.These negotiations will be utilized at a UN conference on biodiversity to be held in China in October 2021. It was postponed in 2020 due to COVID-19.
iii.The event was opened by Secretary-General of the UN Antonio Manuel de Oliveira Guterres, French President Emmanuel Macron, and President of the World Bank Group David Malpass.
iv.The summit was not attended by India, Brazil, Russia, and the United States (US).
v.Notably, the US President-elect Joe Biden is a strong proponent of climate issues as he pledged to preserve 30% of American lands and waters by 2030. But the leader behind the absence of US leaders is that he does not take office until January 20, 2021.
About France:
Capital– Paris
Currencies-Euro, CFP franc
About World Bank:
Headquarters– Washington, D.C., United States
<<Read Full News>> 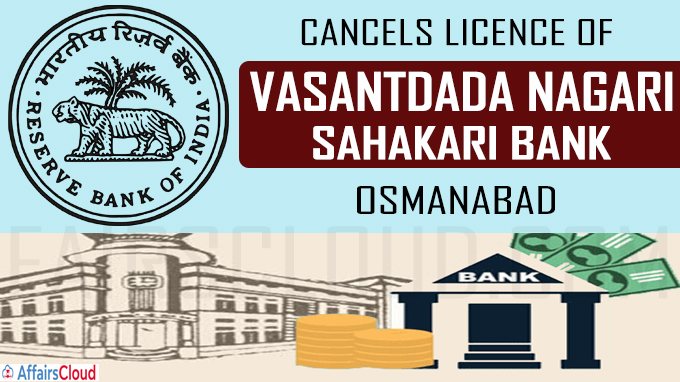 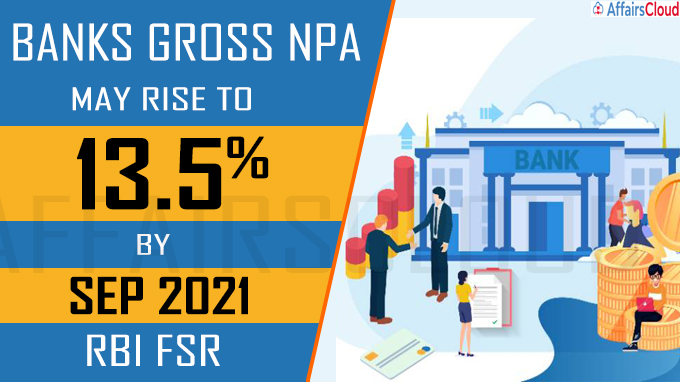 i.On January 11, 2021, Reserve Bank of India (RBI) released the 22nd issue of its bi-annual Financial Stability Report (FSR) 2021. It stated that gross non-performing assets (GNPAs) may rise to 13.5% by September 2021, from 7.5% in September 2020 under the baseline scenario.
ii.In case of severe stress scenario, it is projected that the GNPA ratio will rise to 14.8% which would be 24-year high. It was 15.7% in March 1997.
iii.Banks GNPA and net NPA (NNPA) declined and stood at 7.5% and 2.1%, respectively, in September 2020.
iv.The above mentioned information is based upon the RBI’s macro stress tests covering the first six months (April-September) of the FY20-21.
Static points about Reserve Bank of India (RBI):
-It was established on the recommendation of the Hilton Young Commission.
-RBI is responsible only for printing the currency notes. Minting of coins is done by the Government of India.
-Dr. Manmohan Singh is the only Prime Minister to have also served as the Governor of RBI.
<<Read Full News>> 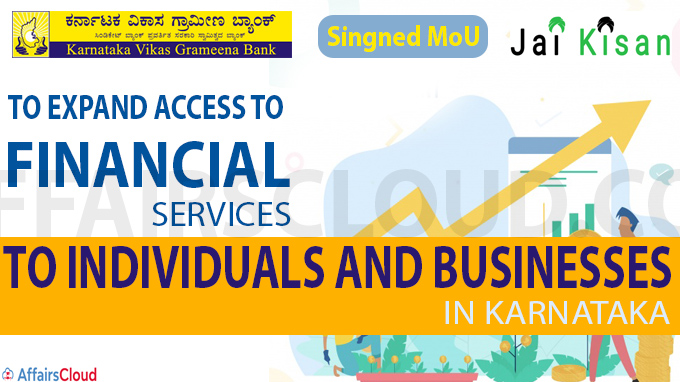 On January 12, 2021 Karnataka Vikas Grameena Bank (KVGB) signed a Memorandum of Understanding(MoU) with Jai Kisan, to expand access to financial services for individuals and businesses in Karnataka, including farmers and non-farmer entrepreneurs. In accordance with the report by rating agency ICRA (formerly Investment Information and Credit Rating Agency of India Limited), India’s real GDP (Gross Domestic Product) will expand by 10.1% in FY2022 with multi-speed recovery. However in absolute terms India’s GDP will “mildly” surpass the levels of FY20.

Key Points:
–India’s general Government (Centre + states) fiscal deficit is projected to moderate to 8.5% of GDP in FY2022 from the 12.0-12.5% of the GDP expected in FY21.
–The current account balance will have a modest deficit of US$15-20 billion (or 0.6% of GDP) in FY2022 from a surplus of US$35-40 billion in FY2021.
–Retail inflation is forecasted at 4.6% for FY22 against the projected 6.4% for FY21.
Recent Related News:
i.In accordance with the official data released by the National Statistical Office (NSO), Union ministry of statistics and programme implementation (Mospi) on August 31, 2020, India’s gross domestic product (GDP) contract by 23.9% (-23.9%) in April-June period quarter of 2020 due to downfall in businesses and livelihood amid COVID-19 pandemic induced nationwide lockdown restrictions.
About ICRA:
Managing Director (MD)– N. Sivaraman
Headquarter– Gurgaon, Haryana 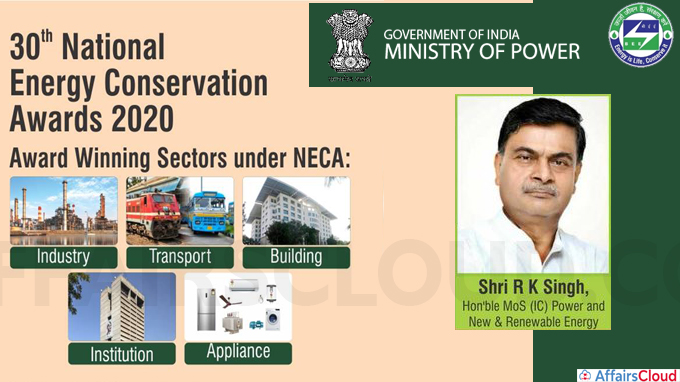 On 11th January 2020, the Ministry of Power in association with the Bureau of Energy Efficiency (BEE) organized the 30th National Energy Conservation Awards 2020 (NECA 2020). R.K. Singh, Minister of State (Independent Charge) for Power and New & Renewable Energy  was the Chief Guest of the event.
i.Around 57 units from 5 sectors (Industry, Transport, Building, Institution & Appliance)  were awarded for their energy conservation & energy efficiency efforts.
ii.Around 409 units participated in NECA 2020, they have together saved 3, 007 Million units & substantial thermal energy savings resulting in savings of INR 1, 503 Crores.
iii.During the event,

Aryan Jain, a high school student Gurugram is part of the 6-member winning team of National Aeronautics & Space Administration’s (NASA) Artemis Next-Gen STEM – Moon to Mars App Development Challenge. The challenge was to develop an app to visualize the Lunar South Pole to assist in mission planning and exploration activities.  The main aim of the NASA Artemis Mission is to land the first woman and next man on the Moon by 2024. Japarov Sadyr Nurgojoevich was elected as the president of Kyrgyzstan after securing nearly 80% votes. He belongs to the ‘Patriotic’ Political Party.
About Japarov Sadyr Nurgojoevich:
i.He served as the Prime Minister of Kyrgyzstan till 14th November 2020 after which his official powers in office are suspended due to the pending results of the January 2021 presidential election.
ii.He served as the acting president of the country after the resignation of Sooronbay Jeenbekov.
Note- After his resignation, Talant Mamytov, speaker of Kyrgyzstan’s Parliament became the acting president of the country.
Presidential Elections
The presidential elections took place on January 10, 2021. His closest competitor, Adakhan Madumarov took less than 7% votes.
About Kyrgyzstan:
It is officially called the Kyrgyz Republic and also known as Kirghizia.
Capital– Bishkek
Currency–  Kyrgyzstani Som(KGS) 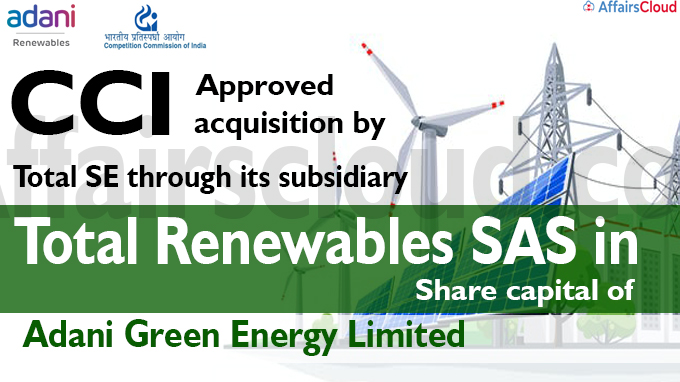 On January 11, 2021 Prof Shashikumar Madhusudan(M.) Chitre, globally renowned astrophysicist and mathematician passed away at the age of 84 in Mumbai, Maharashtra. He is the recipient of Padma Bhushan. He was born on May 7, 1936 in India.
About Prof Shashikumar M. Chitre:
Professor
He retired as a senior professor from the Tata Institute of Fundamental Research, Mumbai, in 2001
He served as the visiting professor of many universities across the world namely, University of Columbia, University of Virginia among others.
Pivotal Role
He was instrumental to establish the University of Mumbai – Department of Atomic Energy Centre for Excellence in Basic Sciences (UM-DAE CEBS) in the Kalina campus of the university.
Research Works
i.His scientific research was focused on solar physics, astrophysics and gravitational lensing.
ii.He performed extensive research on the Sun’s magnetic activity cycle, the solar dynamo theory, and the role of neutrals in the solar atmosphere.
Key Position
Among other posts, he served as the president of Astronomical Society of India & chairman of Indian National Committee for Astronomy and of Bombay Association for Science Education.
Honours
i.He received many awards including Padma Bhushan in 2012 for Science and Engineering & Indian National Science Academy(INSA) Vainu Bappu Memorial Medal – 1995 among others.
ii.He also was honored by fellowships by many prominent scientific institutions namely Max Planck Institute for Extraterrestrial Physics, Indian Academy of Sciences and INSA among others. 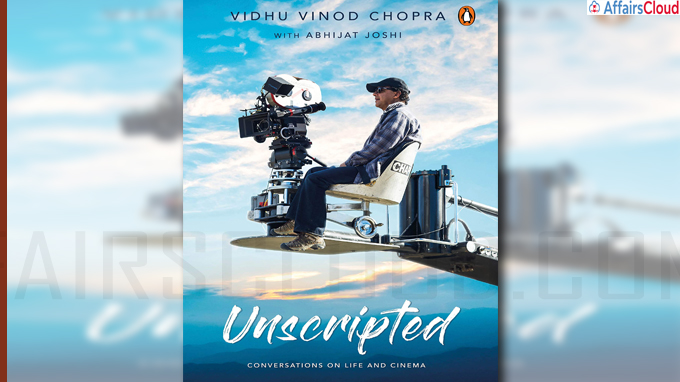 The book titled  ‘Unscripted: Conversations on Life and Cinema’  is authored by Vidhu Vinod Chopra, Indian  film director, screenwriter and producer and Abhijat Joshi, Indian screenwriter. ‘Penguin eBury Press’ is the publisher of the book.
The book is scheduled to be released on January 25.
Essence of the Book
i.The book  gives a glance into the mind, method and madness of Vidhu Vinod Chopra, one of contemporary Hindi cinema’s best filmmakers.
ii.In this book, Vidhu Vinod Chopra speaks to his long-time collaborator and scriptwriter Abhijat Joshi about his journey.
About Vidhu Vinod Chopra:
i.He is the founder of Vinod Chopra Films and Vinod Chopra Productions.
ii.His well known films include, Parinda, 1942: A Love Story , Munna Bhai film series (Munna Bhai M.B.B.S. and Lage Raho Munna Bhai), 3 Idiots(2009)among others
iii.He is a winner of many awards including,  International Indian Film Academy(IIFA) Awards, Filmfare Awards
About Abhijat Joshi:
i.He is well known for his work with Vinod Chopra Productions,as the screenwriter for , 3 Idiots, PK (2014) and Sanju (2018)
ii.He is a professor of English at Otterbein University in Westerville, Ohio, US, since 2003
iii.He won many awards including, National Film Award 2006 in the category Best Screenplay for the film  Lage Raho Munna Bhai, Filmfare Awards among others. 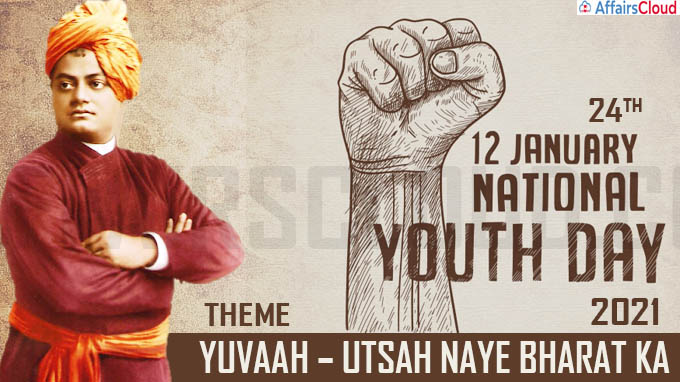 i.National Youth Day(Yuva Diwas) is celebrated annually on January 12 across India to  recognise and honour the teachings of Swami Vivekananda.
ii.The day also aims to encourage youth in India to become a better person and achieve an honourable life that contributed to the development of the country.
iii.This year(2021) marks the 158th birth anniversary of Swami Vivekananda.
Why January 12?
On this day, Swami Vivekananda was born in 1863 in Calcutta, Bengal Presidency, British India (currently- Kolkata, West Bengal, India)
iv.The opening ceremony of the 24th National Youth Festival and the closing ceremony of 2nd National Youth Parliament Festival(NYPF) will both take place in the Central Hall of Parliament on 12th January, 2021.
<<Read Full News>> On January 11, 2021, Punjab Cabinet led by Chief Minister Captain Amarinder singh approved the ‘One Time Settlement (OTS) Scheme for Recovery of Outstanding Dues – 2021’ for Traders to clear their Pending Arrears.