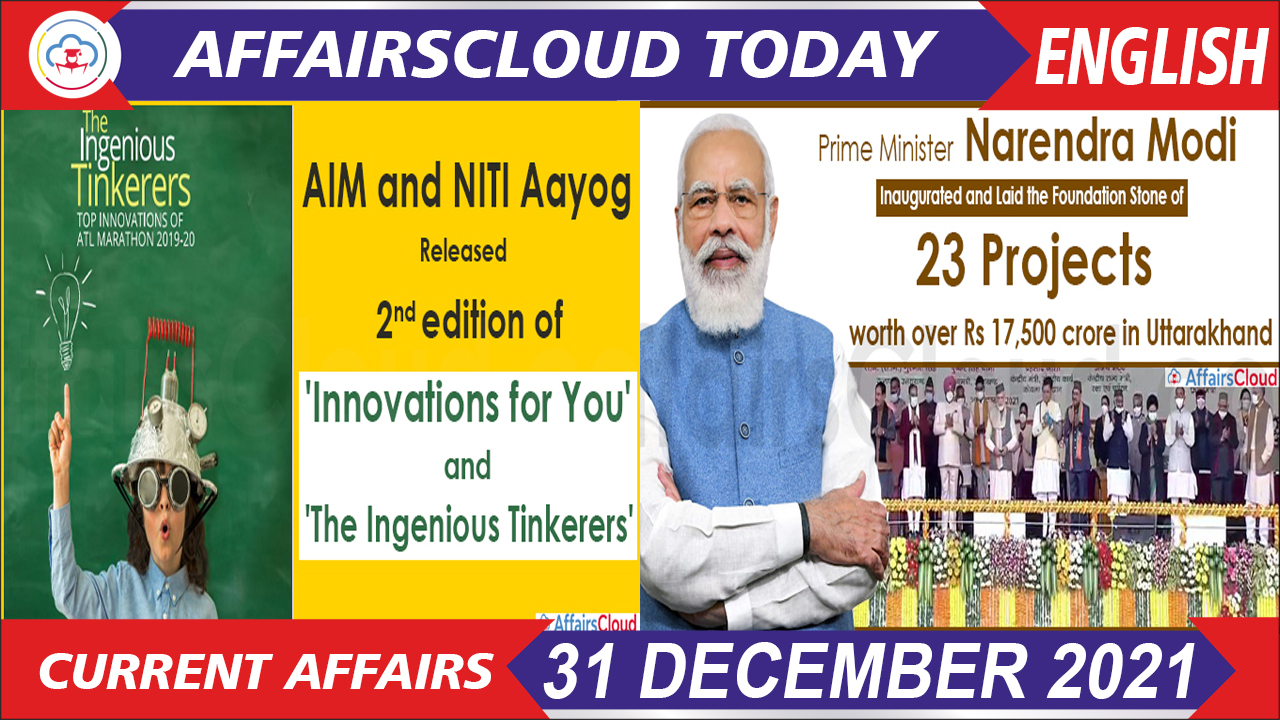 We are here for you to provide the important Recent and Latest Current Affairs 31 December 2021, which have unique updates of Latest Current Affairs 2021 events from all newspapers such as The Hindu, The Economic Times, PIB, Times of India, PTI, Indian Express, Business Standard and all Government official websites. Atal Innovation Mission (AIM) of NITI (National Institute for Transforming India) Aayog released the digital books – ‘The Ingenious Tinkerers’ and the 2nd edition of ‘Innovations for You’.

Key points:
i.The 2nd edition of The ‘Innovations for You’ is a compendium of innovations in Agriculture and allied sectors. It features 70 startups supported by Atal incubation Centers (AICs) of AIM. Reason behind the formation of Committee:
In December 2021, a unit of Army personnel killed 14 unarmed civilians claiming that they mistook them for armed insurgents. After that, Nagaland Assembly unanimously adopted a resolution to repeal AFSPA. 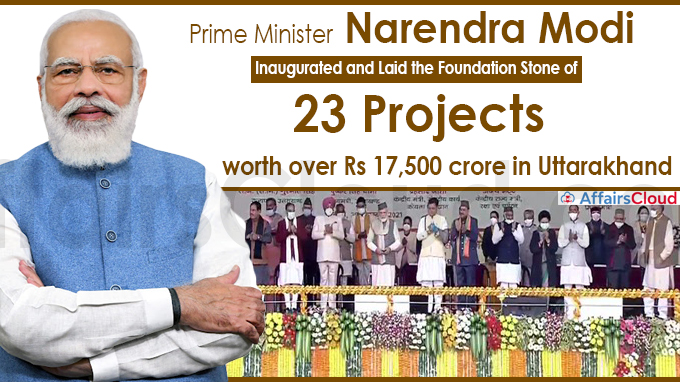 On 30th December 2021 Prime Minister (PM) Narendra Modi inaugurated and laid the foundation stone of 23 projects worth over Rs 17,500 crore in Uttarakhand. ITC Limited has collaborated with Invest India, a non-profit venture of the Indian Government for national investment promotion and facilitation, to crowdsource innovative ideas for single-use plastic (SUP) substitution and automate waste segregation.

ITC Sustainability Innovation Challenge:
Through the Startup India portal, ITC Sustainability Innovation Challenge of the ITC PSPD will invite the responses from start-ups towards challenges of ITC to find the sustainable and smart technology-based solutions for sustainable packaging and Waste segregation, Collection and Handling with technology-based solutions to improve efficiency and speed.
Theme for challenges: Sustainable Solution.
Problem Statement:

Key Points:
i.For sustainable packaging, ICT is inviting ideas to replace plastic-based products with compostable food delivery solutions based on wood fibre, agri-waste etc.
It also invites solutions under recyclable and/or compostable barrier coatings for the papers and paperboards category.
ii.For waste segregation, collection, and handling, ITC focuses on innovative and technology-based solutions for managing the household and municipal waste based on different material types, such as paper, metal, glass and rigid plastic.
The idea should also include an effective revenue model for the waste management ecosystem and lead to significant incremental benefits as the outcome of the solutions.
About ITC Limited:
CMD– Sanjiv Puri
Headquarters– Kolkata, West Bengal.

On 29th December 2021 India welcomed Egypt as the fourth new member of the New Development Bank (NDB) that was established by BRICS (Brazil, Russia, India, China, South-Africa) in 2015.
About New Development Bank (NDB):
Aim –  To mobilise resources for infrastructure and sustainable development projects in emerging economies.
i.Members – The NDB admitted Bangladesh, United Arab Emirates (UAE) and Uruguay as its new members in September 2021 whereas Brazil, Russia, India, China and South-Africa were admitted in July 2015.
ii.The NDB has approved about 80 projects worth USD 30 billion in member countries in areas such as transport, water and sanitation, clean energy, digital infrastructure, social infrastructure and urban development.
About BRICS:
The BRICS Countries represent 41 percent of the global population, 24 percent of the global GDP and 16 percent of the global trade.
About Egypt:
Egypt is one of the world’s fastest-growing countries, a major economy in the African continent and the Middle East region as well as a key player in development finance institutions.
President – Abdel Fattah Al-Sisi
Capital – Cairo
Currency – Egyptian Pound (EGP)
About New Development Bank (NDB):
President – Marcos Prado Troyjo
Establishment – 2015
Headquarters – Shanghai, China 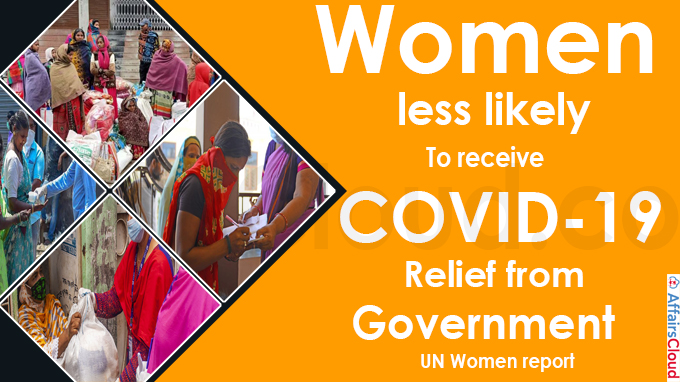 In accordance with the report by United Nations Entity for Gender Equality and the Empowerment of Women aka UN Women titled ‘Women and girls left behind: Glaring gaps in pandemic responses‘, women were significantly less likely to report receiving pandemic-related cash relief from governments or non-profits. 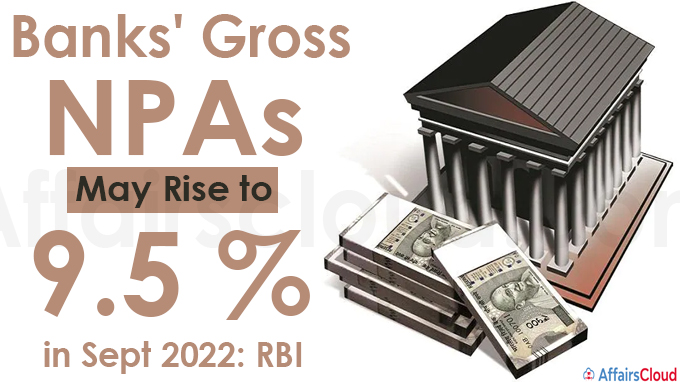 On December 29, 2021, Reserve Bank of India (RBI) released the 24th issue of its bi-annual Financial Stability Report (FSR) 2021. It estimated the Scheduled Commercial Banks (SCBs) Gross Non-Performing Assets (GNPAs) to rise from 6.9 percent in September 2021 to 8.1 percent of total assets by September 2022(under a baseline scenario) and to 9.5 percent (under severe stress scenario).
What is FSR?
It is the bi-annual collective assessment of the Sub-Committee of the ‘Financial Stability and Development Council’ (FSDC-SC) on risks to financial stability.
Financial Stability Report Key Projections:
i.SCBs’ GNPA and NNPA Ratio Projection at end-September 2021: The Reserve Bank of India (RBI) has extended the deadline for periodic Know Your Customer (KYC) updation in bank accounts till March 31, 2022, from the previous deadline of December 31, 2021, due to the Omicron variant of the COVID-19 in India.
Key Points:
i.The deadline was extended so that no restriction can be placed on bank accounts related to cash deposits, withdrawals etc. due to non-compliance with KYC requirements.
ii.Section 38 of the Master Direction on KYC dated February 25, 2016, mandated the REs (Regulated Entities) to carry out periodic updation of KYC of existing customers.
Periodic KYC Updation:
Periodic updation of KYC needs to be carried out at least once every 2 years for high-risk customers, once in every 8 years for medium risk customers and once in every 10 years for low risk customers from the date of opening of the account or last KYC updation.
iii.RBI has also directed that the RE is required to undertake KYC compliance in terms of the Prevention of Money-Laundering Act, 2002 and the Prevention of Money-Laundering (Maintenance of Records) Rules, 2005.
KYC requirements:
KYC is a process under which banks gather their customers’ information while opening an account including Permanent Account Number (PAN), address proof such as Aadhaar, passport etc., latest photograph and other details as requested by the bank.
About Reserve Bank of India (RBI):
Governor – Shaktikanta Das
Establishment – 1st April 1935
Headquarters – Mumbai, Maharashtra
Deputy Governors – Mahesh Kumar Jain, Michael Debabrata Patra, M. Rajeshwar rao and Rabi sankar. On December 2021, the Federal Bank signed a Memorandum of Understanding (MoU) with Schwing Stetter (India) Ltd, a subsidiary of Schwing GMBH, Germany, one of the largest manufacturers of Concrete and Construction equipment in India.

Key Points:
i.The Bank will work to cater to the customers’ needs through Commercial Equipment loans with easy monthly repayment plans.
ii.Federal Bank with its ‘Digital at the Fore and Human at the Core’ mantra, it is aiming to become the Most Admired Bank of every stakeholder.
iii.Stetter India is the one-stop solution provider for the complete concreting and construction industry.
iv.Concreting and Construction equipment that are offered by Schwing Stetter India includes Concrete batching Plants, Self-loading Mixers, Truck-mounted Boom pumps, recycling plants and other specialized concreting equipment.
About Federal Bank:
Establishment – April 23, 1931
Headquarters – Aluva, Kerala
MD & CEO – Shyam Srinivasan
Tagline – Your Perfect Banking Partner 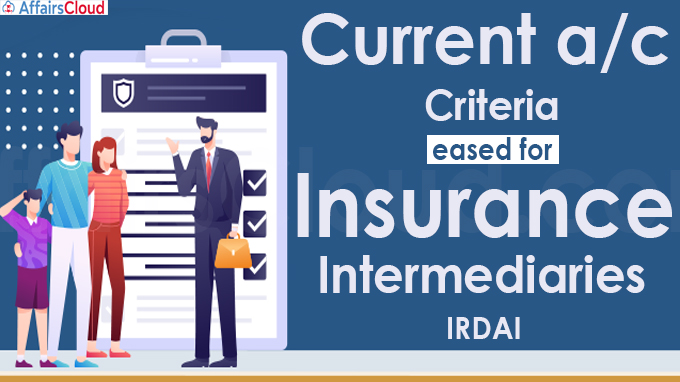 On 29th December 2021, the Insurance Regulatory and Development Authority of India (IRDAI) announced that insurance intermediaries and their entities can maintain current accounts in various banks to meet regulatory requirements and reinsurance business.
Key Highlights:
i.In August 2020, the Reserve Bank of India (RBI) had instructed banks to not to open current accounts for customers who have already availed credit facilities in the form of cash credit or overdraft from the banking system. Senior diplomat Dr Anupam Ray, a 1994 batch of Indian Foreign Service(IFS) officer, has been appointed as India’s next permanent representative(PR)/Ambassador to the United Nations(UN) Conference on Disarmament(CD) in Geneva, Switzerland.

UN Conference on Disarmament (CD):
i.The Conference on Disarmament (CD), was recognized by the 10th Special Session on Disarmament  (SSOD) (1978) of the United Nations General Assembly(UNGA) as single multilateral disarmament negotiating forum of the international community.
ii.The CD meets in an annual session, which is divided into 3 parts of 10, 7 and 7 weeks.
Aim: To negotiate arms control and disarmament agreements.
Members: 65 member States, including the 5 Non-Proliferation Treaty(NPT) nuclear-weapon States and 60 other States of key military significance.
About Dr Anupam Ray:
i.Dr Anupam Ray has served in the Embassy of India in Bonn, High Commissions of India in Dhaka and London, in the Permanent Mission of India to the United Nations in New York.
ii.He has also served as the Consul General of India in Houston, United States of America(USA).
Appointment of Pankaj Sharma:
Dr Pankaj Sharma has been appointed as the next Ambassador of India to Mexico. Senior cricket player of New Zealand, Ross Taylor announces to retire from international cricket after playing in the Two-Test series against Bangladesh and his last ODIs (One Day Innings) against Australia and the Netherlands in March 2022.

Early life & career:
i.Ross Taylor is a 37-year-old international cricketer and former captain of the New Zealand national team.
ii.In Indian Premier League (IPL), he was a part of the Royal Challengers Bangalore season from 2008 to 2010 and then became a part of Rajasthan Royals team.
Major records:
i.Ross Taylor holds several records including scoring most runs for New Zealand in ODI (8,581) & Test (7584)
ii.He also holds the record of most catches by a New Zealand cricketer 346 catches & scored most hundreds (40) for New Zealand.
iii.He is one of the only four New Zealand cricketers to play 100 test matches, after Daniel Vettori (112), Stephen Fleming (111), and Brendon McCullum (101). The Housing and Urban Affairs Secretary of India, Durga Shankar Mishra   got approval from the Department of Personnel & Training (DoPT), the Appointments Committee of the Cabinet to take charge as the new Chief Secretary of Uttar Pradesh (UP).

Other appointment:
i.The Ministry of Personnel, Public Grievances and Pensions also announced Manoj Joshi to be the new Housing and Urban Affairs Secretary upon superannuation of Durga Shankar Mishra.