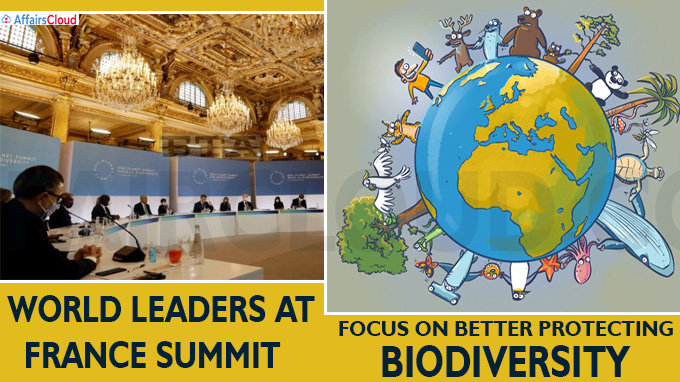 On January 11, 2021,4th edition of One Planet Summit (OPS) 2021 was virtually organized by France, the United Nations (UN) and the World Bank from Paris (France) to prepare negotiations for setting global biodiversity targets in order to protect nature in the next decade.The theme of the summit is “Let’s act together for nature!”.

The OPS launched initiatives for the 4 major focus areas. These are detailed as below:

Topic: Identifying links between deforestation and the health of humans and animals.

–Germany along with the United Kingdom (UK) and Norway has set aside $5 billion over the past 5 years to protect rainforests.

–France is looking towards merging the issues of climate change and the preservation of biodiversity as experts as they are interconnected.

–Biodiversity is the natural capital of the world. Its exploitation, pollution and climate change is irreversible damage to ecosystems.

–As per the World Economic Forum (WEF), emerging business opportunities across nature could create 191 million jobs by 2030.

–Around 1 million animal and plant species could become extinct in coming decades.

–More than 40% of the amphibian species are endangered.

–Upto 70% of the coral reefs have been lost or heavenly damaged.

About One Planet Summit (OPS):

It was incepted in 2017 as a pledging platform to preserve oceans, climate and biodiversity.  It is on the lines of One Planet movement founded by France, the World Bank and the UN to speed up the implementation of international climate agreements by supporting specific projects at the local level.