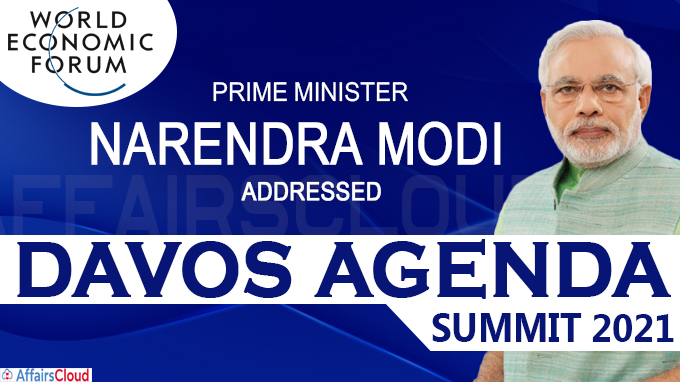 i.Prime Minister’s (PM) address in the WEF forum focussed on the ‘Fourth Industrial Revolution-using technology for the good of humanity’.

v.India has committed to develop sustainable urbanization with focus on ease of living, ease of doing business & climate sensitive development.

The discussions were focussed on policies, practices and partnerships needed for reopening borders to resume travel, tourism and commerce in a safe and sustainable way.

USA rejoins the Paris Climate Accord:

During the WEF’s panel discussion on ‘Mobilizing Action on Climate Change’, US Special Presidential Envoy for Climate, John Kerry stated that the US has re-joined the Paris Climate Accord to fulfill its goals under the deal.

i.Objective – To Accelerate the adoption of Inclusive, Transparent & Trusted AI across the globe.

ii.By 2035, AI is expected to contribute over USD 14 Trillion to the Global Economy.

ii.It is the 1st Global mobilization of public sector and industry leaders to ensure affordable and accessible digital opportunities for everyone.

iii.Pandemic has exposed the inequalities and gaps in access to digital technologies across the world.

Around 10, 000 Innovators have joined a digital platform ‘UpLink’ created by WEF. ‘UpLink’ was launched at the WEF Annual Meeting 2020 in Davos, Switzerland.

i.Other companies which have already joined the coalition are Microsoft, Facebook, Google & Bank of America.

ii.The coalition emphasizes companies to include racial and ethnic justice in their company’s agenda.

During the WEF Forum, UN Secretary General Antonio Guterres stated that the World is facing existential threats due to Climate Change & Biodiversity.