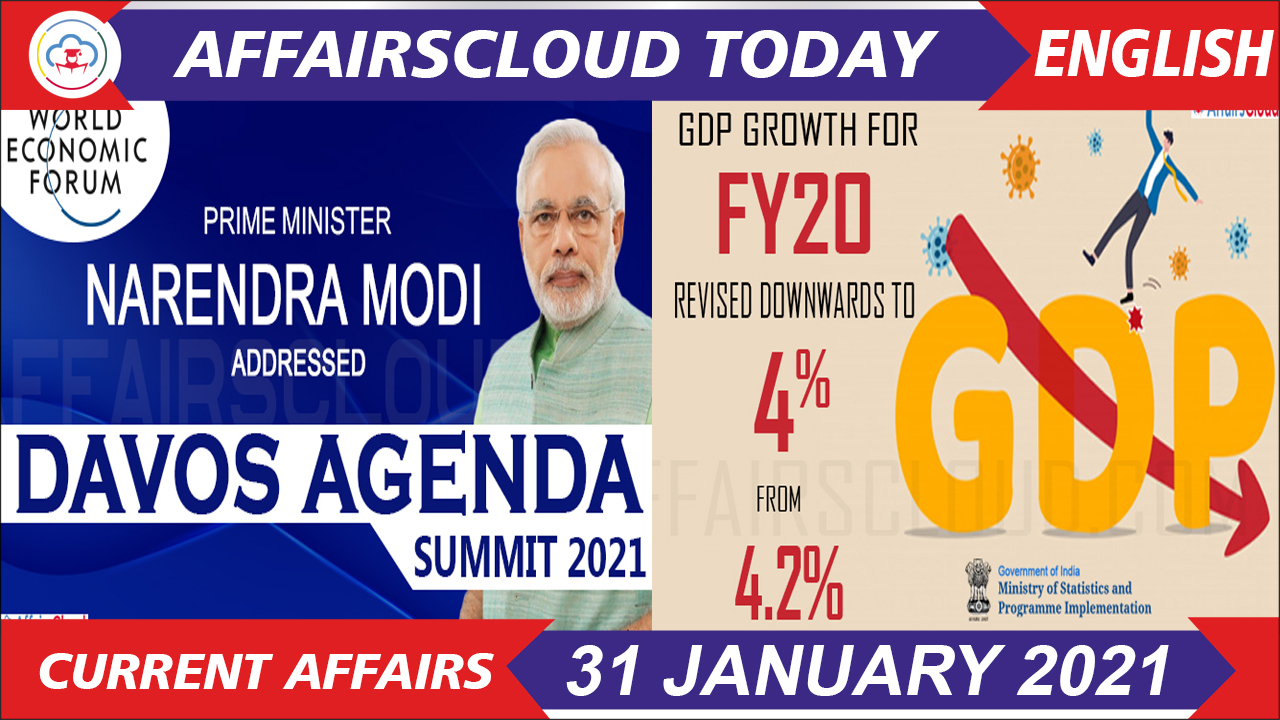 We are here for you to provide the important Recent and Latest Current Affairs 31 January 2021, which have unique updates of Latest Current Affairs 2021 events from all newspapers such as The Hindu, The Economic Times, PIB, Times of India, PTI, Indian Express, Business Standard and all Government official websites. 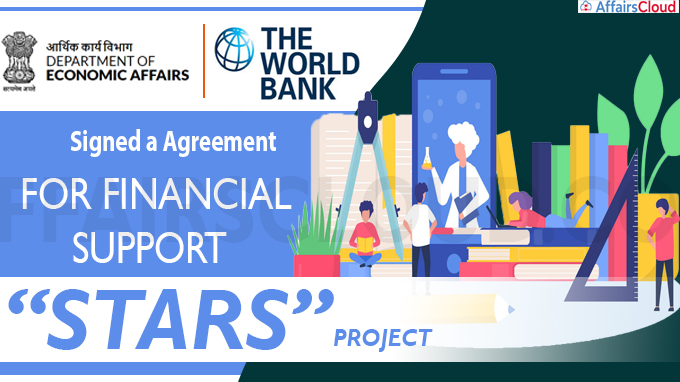 i.On the lines of the Cabinet approval to the Strengthening Teaching-Learning and Results for States (STARS) project in Oct 2020, a financial support agreement was signed between Ministry of Education (MoE), Department of Economic Affairs (DEA), and World Bank (WB) for the implementation of Rs 5718 crore STARS project on January 29, 2021, .
ii.Under the agreement, WB will provide US$ 500 million (approximately Rs. 3700 crore) and the rest will be shared by participating states for a period of 5 years.
iii.There are 6 participating states viz. Himachal Pradesh, Rajasthan, Maharashtra, Madhya Pradesh, Kerala and Odisha.
iv.It should be noted that the WB support will be in the form of a financing instrument called Program for Results (PforR).
About Ministry of Education (MoE):
The Ministry of Education was formerly known as the Ministry of Human Resources Development (MHRD).
Minister of State (MoS)– Sanjay Shamrao Dhotre
Headquarters – New Delhi
About World Bank (WB):
Establishment– 1944
President– David Malpass
Headquarters– Washington, DC, United States (US)
Member Countries– 189(including India)
<<Read Full News>> 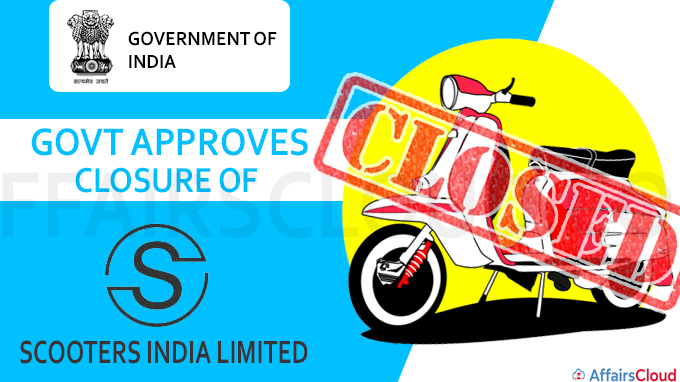 Cabinet Committee on Economic Affairs (CCEA) approved the closure of state-owned Scooters India Limited (SIL). The company is being closed as it has been only accumulating losses.

ii.In the past, Government’s  search for finding buyers for SIL were unsuccessful 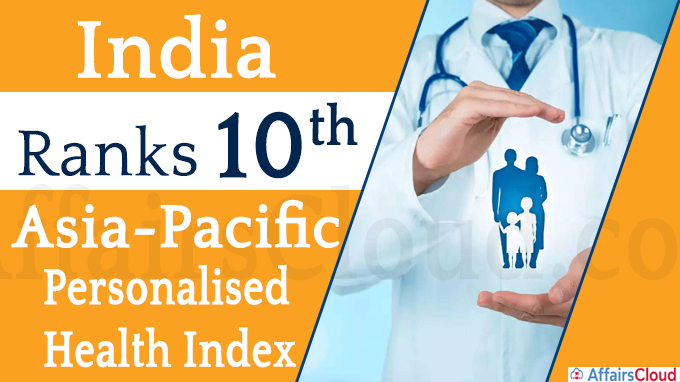 According to the Economist Intelligence Unit (EIU) report ‘Asia-Pacific Personalised Health Index 2020’ developed by the Copenhagen Institute for Future Studies in partnership with Roche, India with a score of 36 was ranked at 10 out of 11 Asia Pacific Countries in terms of adopting Personalised healthcare & steps taken to provide right care to the needed person at the right time. Singapore topped the Index followed by Taiwan & Japan at 2nd & 3rd positions respectively. 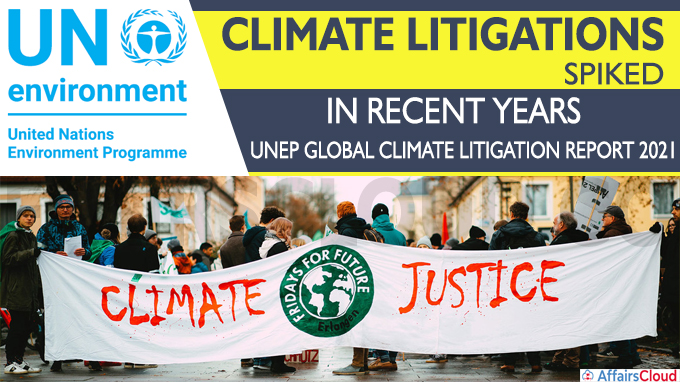 i.The UN Environment Programme (UNEP) released a report titled “Global Climate Litigation Report: 2020 Status Review”.
ii.The report was published by UNEP in cooperation with the Sabin Center for Climate Change Law at Columbia University.
iii.The report states that the climate litigation cases increased in recent years, which has made the courtroom relevant to the efforts to address climate change across the globe.
iv.According to the report as of 2017, around 884 cases were brought in 24 countries and as of 2020, the cases have doubled with around 1550 climate change cases in 39 countries, including the European Union Courts.
v.The report also identified some of the recent trends in the climate litigations.
About UNEP:
Executive Director– Inger Andersen
Headquarters– Nairobi, Kenya.
UNEP was founded in June 1972 as a result of the Stockholm Conference on the Human Environment.
<<Read Full News>> i.On January 28, 2021 StashFin entered into partnership with SBM Bank (India) Ltd to launch their co-branded prepaid card, ‘StashFin SBM card’.
ii.The card is powered by Visa and has a contactless Europay, MasterCard, and Visa(EMV) chip, enabling cardholders to have 24×7 access to funds. It has been designed through collaboration.
iii.It acts as a personal overdraft facility, enabling customers to take loans up to Rs 5 Lakhs.
iv.The card users have an option to convert all their purchases into Equated Monthly Installments(EMIs).
About SBM Bank (India) Ltd:
i.It is the first bank to receive a banking license from the Reserve Bank of India (RBI) and to establish a universal banking business in India through the Wholly Owned Subsidiary (WOS) mode.
ii.SBM became the 1st foreign Bank in India to operate as a new Indian bank.
Headquarters– Mumbai, Maharashtra
Managing Director(MD) and Chief executive Officer(CEO)– Sidharth Rath
Commenced Operations– 1st December 2018
<<Read Full News>>

GDP growth for FY20 revised downwards to 4% from 4.2%: NSO Estimates 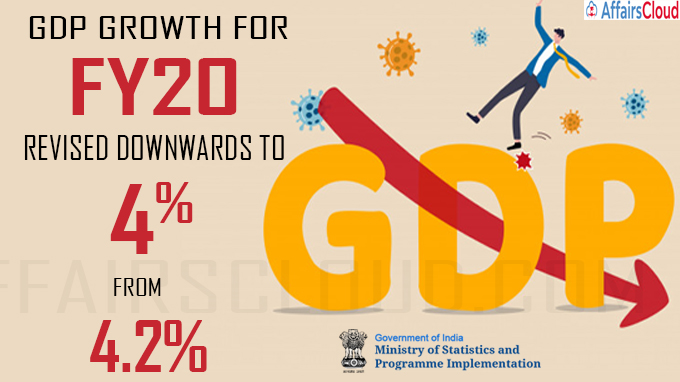 i.On January 29, 2021, the National Statistical Office (NSO), Ministry of Statistics and Programme Implementation (MoSPI) released the First Revised Estimates (FRE) which stated that the growth rate of Indian economy was 4% in FY2019-20. This growth estimate is lower than the provisional estimates (PE) of FY20 growth at 4.2% released in May 2020.
ii.The estimates cover National Income, Consumption Expenditure, Saving and Capital Formation.
iii.Reminder: As per the first advanced estimates (AE) of national income by MoSPI, India’s GDP (Gross Domestic Product) will shrink 7.7% (-7.7%). It will see recession after 41 years in FY21. Almost all sectors, except agriculture will see contraction. On 29th January 2021, Sylvestre Ilunga Ilunkamba, Prime Minister(PM) of Democratic Republic of the Congo(DRC) tendered his resignation to Felix Tshisekedi, President of DRC.
The lawmakers of the DRC voted and approved the motion of censure against PM Ilunkamba and his coalition government by 367 to 7 votes during the session held on 27th January 2021. On January 28, 2021 Indian Naval Fast Attack Craft (IN FAC) T-81 of the Super Dvora MK II class was decommissioned at  Naval Dockyard, Mumbai, Maharashtra.
The 25 meters long vessel with 60 tonnes displacement has served India for more than 20 years. Rear Admiral V Srinivas, Flag Officer Commanding Maharashtra Naval Area was the  Chief Guest on the occasion.
About IN FAC T-81:
General Info
IN FAC T-81 was built at Goa Shipyard Ltd in collaboration with M/s Ramta of Israel.
The vessel was commissioned into the Navy on 05 Jun 1999 by the then Governor of Goa, Lt Gen JFR Jacob (Retd).
Features
The vessel was designed for shallow waters and can achieve speeds up to 45 knots.
Other features include, day/night surveillance and reconnaissance, Search & Rescue, etc.,
About Indian Navy:
Integrated Headquarters Ministry of Defence (Navy)– New Delhi, Delhi
Chief of the Naval Staff (CNS)– Admiral Karambir Singh, 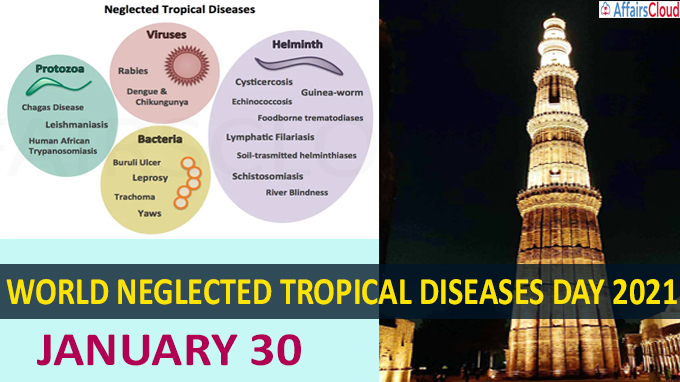 i.World Neglected Tropical Diseases(NTD) Day is annually observed across the globe on 30th January to highlight the global commitment to eliminate Neglected Tropical Diseases that has affected the most marginalized communities of the World.
ii.The 30th January 2021 marks the 2nd annual World Neglected Tropical Diseases(NTD) Day.
iii.The Funding for World NTD Day is provided by the Crown Prince Court of Abu Dhabi.
iv.India has joined the movement to combat against NTD and will light up Qutub Minar as a part of the “Monument Light-Ups” event.
v.The World Health Organisation has come up with a road map to tackle 20 NTDs across the globe in the next 10 years.
vi.The road map titled “Ending the neglect to attain the Sustainable Development Goals: a road map for neglected tropical diseases 2021-2030” was agreed during the 73rd meeting of the World Health Assembly (WHA) held from 9th to 14th November 2020.
<<Read Full News>> 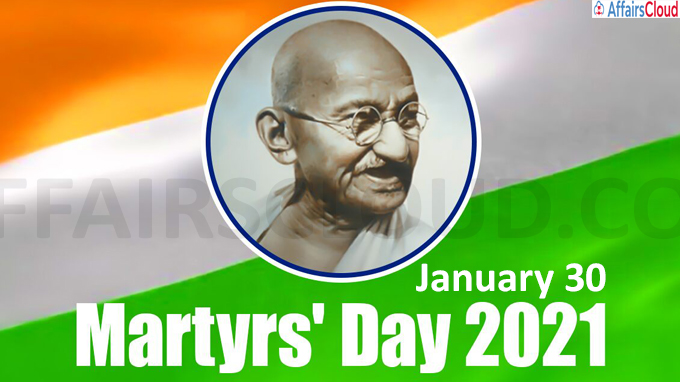 i.The Martyrs’ Day which is also known as “Shaheed Diwas” is annually observed across India on 30th January to pay respect to the martyrs who lost their lives during India’s freedom struggle. The day also to mark the death anniversary of Mahatma Gandhi.
ii.The 30th January 2021 marks the 73rd Martyrs Day or Shaheed Diwas.
iii.As a tribute to the Father of Nation Mahatma Gandhi, the film divisions streamed “Gandhi Rediscovered”, a 27 minutes documentary in Both Hindi and English, which discuss the scope of Swadeshi.
<<Read Full News>>