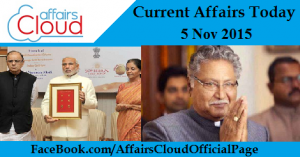 Cause of  Straw Burning :-

By disappointing many women in the country, the apex court(Supreme court) announced that the 2005 amendment in Hindu law will not give property rights to a daughter if the father died ahead the amendment took place. If the daughter want to become a co-sharer with her brothers, the father would have to be alive on September 9, 2005.

Bench led by  Justices Anil R Dave and Adarsh K Goel said that the date of a daughter having equal right in an ancestral property is on and from the day one of the Act.

A government school in Srikakulam district of Andhra Pradesh and  Varanasi.

The United Nations General Assembly’s (UNGA) Disarmament Committee has adopted a draft resolution submitted by Japan calling for the abolition of nuclear arms.

Hindi largest spoken Indian language in US: Census Bureau of US

According to the latest Census data Hindi has emerged as the largest Indian language spoken in the US with nearly 6.5 lakh people.

Top languages other than English spoken in US homes

Other Languages of India :

David Cameron faced intense criticism after trade deals(40) worth 3 billion pounds with the president of Kazakhstan(Nursultan Nazarbayev) who is controversial due to  allegations of torture, shooting of protestors, religious repression and media censorship.

IT solutions company Unisys Corporation has appointed Ravikumar Sreedharan as managing director of its India unit from October 31. Sreedharan, who was leading the application services group in Unisys India takes on additional charge as MD from Kumar Prabhas.

Justin Trudeau sworn in as Prime Minister of Canada

Park shot a finals world and Asian record score of 199.2 to clinch the gold medal. Jitu finished with a finals score of 189.5 and qualified for the finals in 7th position with a score of 555.

Widely known for his study of the Indian independence movement, especially on the prosperous foreign policy of the Indian national congress, written many analysis of Foreign Affairs in the South Asian region.

As an Ambassador to Nepal

He is known as an expert on relations within South Asia and has had personal connections with many leaders from the region. He had worked with Indian prime ministers P V Narasimha Rao and his Nepali counterpart Girija Prasad Koirala to strengthen India’s aid to Nepal.

A  number of books on Jayaprakash Narayan’s philosophy and life