The Paragliding World Cup 2015 got underway with Union Minister of Civil Aviation P. Gajapati Raju flagging off the pilots from the Billing launch site in Bir.

Participants : A total of 130 pilots representing more than 35 countries are taking part in the World Cup . 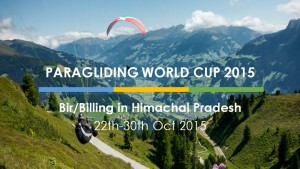 For the first time GPS-aided GEO augmented navigation (GAGAN), an India SBAS (Satellite Based Augmentation System) Programme jointly developed by the India Space Research Organization (ISRO) and the AAI will be used for live tracking of the pilots.

Top-ranking pilots  in world and in Europe

The Billing Paragliding Association formed in 2006 had successfully organised the Pre-World Cup of Paragliding here in 2013.