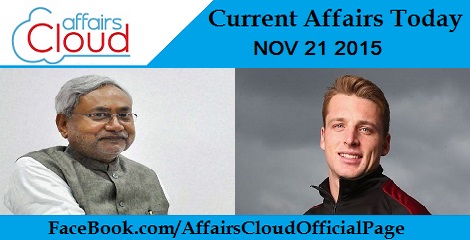 The Delhi Cabinet, headed by Chief Minister Arvind Kejriwal has approved the Delhi Jan Lokpal Bill, 2015. The Aam Aadmi Party has 67 MLAs in the 70-member House.

About Jan Lokpal Bill
Jan Lokpal Bill aka Citizen’s Ombudsman Bill, is an anti-corruption bill drafted and drawn up by civil society activists in India seeking the appointment of a Jan Lokpal, an independent body to investigate corruption cases.

Rajasthan has organised Resurgent Rajasthan Partnership Summit, in Jaipur on 19-20 November, 2015 to attract investment from private sectors in the state. As a part of this Event State has inked 295 MoUs with a commitment of about Rs 3.3 lakh crore investments and a task force would be formed to get the projects implemented in a time-bound manner.

On the sidelines of 63rd meeting of the CABE chaired by Union HRD Minister Smriti Irani on August 19, Haryana Education Minister Ram Bilas Sharma has been appointed as the member of Sub-Committee of Central Advisory Board of Education (CABE).

Committee would suggest preventive measures that could be taken to stop children from dropping out of schools and develop strategies to help in re-engaging Out of School Children.

The UN Security Council unanimously approved the French-sponsored resolution 2249 (2015) to redouble and coordinate action to prevent further attacks by Islamic State terrorists and other extremist groups.

The Chinese navy has conducted naval drills in the South China Sea by employing major destroyers and frigates, carrier-based helicopters and new submarines.

The exercise was based out of the Sanya training base of the People’s Liberation Army Navy, focusing on anti-submarine warfare without detailing the exact time and places for the maneuvers.

Union Home Minister Rajnath Singh and Chinese Premier Li Keqiang and Interior Minister Guo Shengkun  have agreed to form a Ministerial-level mechanism headed by their Home Ministers to step up cooperation and coordination on a host of security-related issues in Beijing .

Location : Dabaa on the Mediterranean coast

Revenue Department move follows the recommendation of the Designated Authority in Commerce Ministry in its sunset review investigation of existing anti-dumping duty on import of ‘carbon black used in rubber applications’ from China, Russia and Thailand.

UN chief Ban Ki-moon has designated Padma Bhushan awardee Yusuf Hamied as one of the members of a high-level panel on health technology innovation.

Harshavardhan Neotia Chairman of Ambuja Neotia group has been elected as president of industry body Ficci for 2016. Neotia will take over from the current Ficci President Jyotsna Suri during the chamber’s AGM next month.

The Federation of Indian Chambers of Commerce and Industry (FICCI) is an association of business organizations in India. Established in 1927, on the advice of Mahatma Gandhi by GD Birla and Purushottam Das Thakurdas.

The JD(U) members who took the oath are:

Drug firm Strides Shasun Ltd has appointed S Abhaya Kumar as the Executive Director of the company effect from November 19, 2015.

Tennis champion-turned Hollywood filmmaker Ashok Amritraj (59) has been awarded an honorary doctorate by the University of East London.

An indigenously-developed Unmanned Aerial Vehicle (UAV) of the Indian Army crashed near Pokhran in Jaisalmer district of Rajasthan due to a technical glitch.

The Nishant UAV programme is as good as dead now, with the Army deciding not to purchase any more Nishant. In the past DRDO has blamed poor handling by the army for the loss. But, the army has maintained that they failed to perform and had technical problems

The Income Tax Department is developing a mobile app for taxpayers to help them file their returns, online tax-filing company, ClearTax.in is targeting the professional CAs with the first-ever mobile tax-filing app for the Chartered Accountants (CAs). More than 10,000 CA firms have already tied-up with ClearTax.in for this.

Wicketkeeper Jos Buttler has smashed his own record for all of England’s quickest ODI hundreds with a record breaking century which led to 84-run win over Pakistan in a final one-day international held in Dubai.

Buttler had already recorded the two fastest ODI centuries for England (61 balls against New Zealand and 66 against Sri Lanka) finished unbeaten on 116 from 52 balls with 18 of them having been hit for four or six.

Dr. Mahesh Sharma, Minister of State (I/C) for Culture and Tourism released 3 Books on Rajyogini Dadi Janaki, the 100-year-old Head of the Brahma Kumaris organization to celebrate her Centenary celebrations of at a function held in Chinmaya Mission .

Name of the Books& it’s authors :