Dear Readers, We cover some important news in Current Affairs Today April 18 2017, which are not covered in Daily Detailed News, More Current Affairs coverage will help you to Score Good Marks in Competitive Exams. 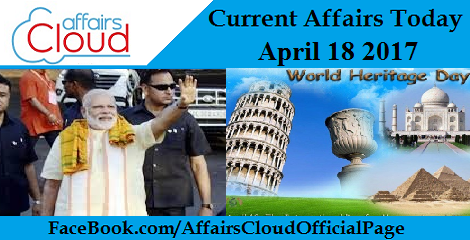 PM Narendra Modi’s two day visit to Gujarat
Prime Minister Narendra Modi was on a two-day visit to Gujarat on 16th and 17th April, 2017. During this visit, he inaugurated many projects across the state.
i. On April 17, 2017, PM Modi inaugurated the Kiran Multispeciality Hospital and Research Center in Surat
ii. At Bajipura village in Tapi district of Gujarat, PM Modi inaugurated a fully automated cattle feed plant of SUMUL Dairy.He also inaugurated an ice-cream plant and laid the foundation stone for dairy products plant at Nava Pardi.
iii. In Botad district of Gujarat, PM Modi inaugurated Phase-I of Link 2 pipeline canal of the ambitious Saurashtra-Narmada Avtaran Irrigation (SAUNI) Yojana by formally releasing the Narmada water in Krushna Sagar Lake. 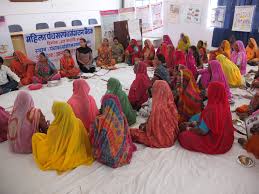 administers them so that they can give special emphasis on efficient usage of funds for achieving their overall development.
i. The National Commission for Women (NCW) with the help of Tata Institute of Social Sciences, Mumbai, has developed training modules for empowering these elected women.
ii. They will get training under experts from the National Institute of Rural Development and Panchayati Raj (NIRD and PR) in Hyderabad. 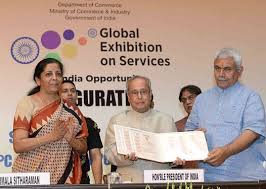 Kerala government to give pension to circus artistes
The CPI (M)-led LDF government in Kerala has decided to provide pension to former circus artistes in the state.
i. Chief Minister Pinarayi Vijayan had recently visited Kannur district which is considered to be the cradle of Indian circus. During this visit, group of circus artists met the CM and briefed him of their plight.
ii. Kerala State Govt. has allocated Rs 1.13 crore for this purpose. 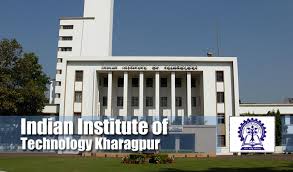 of architecture.
iii. It will open up new avenues and concepts for students.
iv. Projects and Tests on Vastu Shastra will also be a part of the curriculum.
v. For undergraduate students at IIT Kharagpur will study the basics of VastuShastra.
vi. For post-graduate and research scholars they will study in more detail.
vii. According to the faculty members at IIT Kharagpur believe that students who are studying architectural concepts prevalent in the West should also know and learn about ancient Indian architectural traditions.
viii. It includes principles, nine-circuit placements, sacred altars design semiotics and semantics for the post graduate students.
* VastuShastra has its beginnings in Rig Veda.

Australia abolishes 457 visas programme largely used by Indians
Australia has abolished a visa programme that is used by over 95,000 temporary foreign workers and majority of them are Indians.Its objective is to tackle the growing unemployment in the country.
Key Highlights:
i. Australia will adopt a new ‘Australians First’ approach to skilled migration.
ii. The new “Temporary Skill Shortage Visa” programme will comprise two streams—Short Term and Medium Term
iii. Short-term visas will be issued for two years and medium-term visas will be issued only for more critical skills shortages and for up to four years.
iv. The programme known as 457 Visa which permits business to employ foreign workers for a period up to four years in skilled jobs where there is a shortage of Australian workers.
v. The 457 visa will replace new work visa that will require foreign workers to have better English language and job skills
vi. In order to fill critical skill gaps this programme has been launched.It includes mandatory criminal checks and tighter English language requirements.
vii. This new programme will be implemented soon and completed by March 2018.
viii. These changes will give Australian job seekers more opportunity to find work and prosper their business growth efficiently.
About Australia:
♦ Capital: Canberra
♦ Currency: Australian Dollar
♦ PM: Malcolm turnbull (29th PM)
♦ Official Language: Australian English

SBI surpasses ONGC to become most valued PSU stock
State Bank of India (SBI) surpassed ONGC to become the most valued public sector undertaking (PSU) state-owned firm in terms of market valuation.
Key Facts:
i. The shares of SBI rose by 2.33 per cent to Rs 296.40 and ONGC lost 1.36 per cent to Rs 180.60.
ii. SBI surged almost 16 per cent while that of ONGC fell by over 4 per cent.
iii. SBI m-cap stood of Rs 239,808 crore and ONGC having m-cap of Rs 236,003 crore.
Key points:
♦ SBI headquarter is in Mumbai and it was founded in 1955.
♦ SBI chairman is Arundhati Bhattacharya.
♦ SBI slogan is “The Banker to Every Indian”.
♦ ONGC chairman is Dinesh K Sarraf.
♦ ONGC headquarter is in Uttarakhand and it was formed in 1956.

PNB launches new products for customers on its foundation day
Punjab National Bank (PNB) has launched three new products for its customers on the occasion of 123rd foundation Day.
i. PNB MD and CEO UshaAnanthasubramanian launched the three products.
ii. The three new products which are launched by PNB are automated electronic toll collection to facilitate hassle-free toll payment collection, a Credit card Mobile App and a scheme for financing a grid connected Roof Solar Power Project.
iii. To assist PNB employees to do their HR-related operations through their mobile phones.
* PNB Headquarter is in New Delhi and was founded on 12th April 1895. RBI opens new Ombudsman office for Chhattisgarh and Jammu
The Reserve Bank has started a new office at Raipur for Chattisgrah and for Jammmu.Focus is to look into the grievances of residents and entities.
Highlights:
i. File complaints ranging from non-payment or delay in payment or collection of cheques/drafts, failure to provide or delay in providing a banking services, on-adherence to prescribed working hours, non- acceptance of small denomination notes or coins, delays or non-credit of proceeds to parties’ accounts to non-observance of RBI’s directives on banking services.
ii. Raipur office will have jurisdiction over the entire state of Chhattisgarh earlier it was under the jurisdiction of Bhopal office of the banking ombudsman.
iii. Those People who are having grievances about banking services can lodge complaints at the banking ombudsman office.
About RBI:
♦ RBI is India’s central bank institution.
♦ HQ- Mumbai, Maharashtra
♦ Established 1 April 1935
♦ Governor Urjit Patel 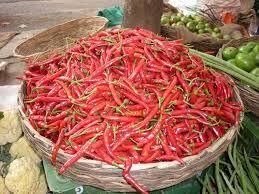 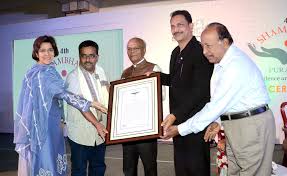 Visva-Bharati University at a function held on April 16, 2017 in Bhubaneswar, Odisha.
i. This was the 4th edition of Shambhavi Puraskar.
ii. Hari Shankar Rout is an engineer by profession. He has been working on natural resource management and livelihood promotion of marginalised communities in remote areas in Kandhamal district of Odisha

INS Chennai dedicated, Chennai to become hub of Naval activities
INS Chennai a P 15A Guided Missile Destroyer of Indian Navy was dedicated to the city of Chennai on April 17, 2017.The ship has a complement of about 45 officers and 395 personnel.
Major Points:
i. The ship is under the command of Captain CR Praveen Nair.
ii. Ceremony includes Shri Edappadi K Palaniswami, Chief Minister of Tamil Nadu, Dr D Karthikeyan IAS, Commissioner of Chennai and Vice Admiral HCS Bisht.
iii. The Indian Navy is ready to meet the challenges at sea due to potent weapon platforms like the Chennai.
iv. He announced the Navy’s commitment towards the Government of Tamil Nadu and provides help to 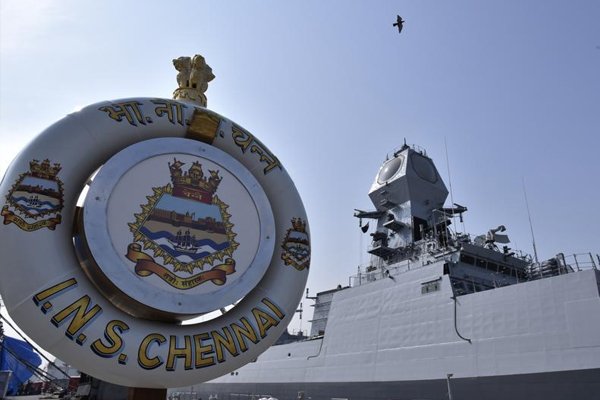 the people whenever called for.
v. After completion of ceremony the Chief Minister presented a memento to the ship which finds a suitable place and also remind of the association the ship has with the city of Chennai.
Keys :
♦ Chennai is the capital of Tamil Naidu
♦ CM- K.Palaniswami
♦ Governor- C. Vidhya Sagar Rao

Gupshup launches bot-to-bot communication platform ‘InterBot’
Leading bot platform Gupshup has announced the launch of ‘InterBot’, a first of its type platform that enables bot-to-bot communication. Ability to communicate will give bots human-like capabilities to transact, co-ordinate, compete, collaborate and negotiate with each other.
i. Interbot communications will unleash following new possibilities:
1.Shopping bots can negotiate with merchant bots to find the best prices
2.A taxi bot can ask the cafe bot to have the coffee ready by the time the user’s taxi arrives
3.Personal assistant bots can schedule meetings on behalf of humans
4.Bots can form groups and hierarchies to improve decision-making within the enterprise
ii. To use InterBot, bots will first have to publish themselves on this new platform. These bots can exchange services and learn from each other. 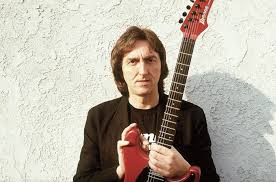 Movie. In 2009 he released the live album Blues for Tony – a tribute to drummer.
ii. He first appeared on a record in 1969 and released his sole album with the Igginbottom’s Wrench in 1969.
iii. He was working on a new solo album at the time of his death.

Former Andhra Pradesh minister Devineni Rajashekhar passes away
Telugu Desam Party (TDP) leader Devineni Nehru and former Andhra Pradesh minister had died.
i. Nehru began his political career as a student union leader and founded the United Students Organisation.
ii. He served as the minister in N.T. Rama Rao’s cabinet from 1994 to 1996.
iii. He was made the Education Minister in the NTR Cabinet in 1994.
iv. He won the state elections in 1985, 1989 and 1994 as a TDP candidate from Kankipadu constituency in Krishna district.
v. He was elected to Andhra Pradesh assembly from Kankipadu in 1983 and retained the seat in 1985, 1989 and 1994. sites around the world that have achieved world heritage status
v. Awards has been given to organizations or persons who have made an outstanding contribution to the conservation and promotion of cultural heritage or produced an excellent publication on the subject.
vi. Promotion of World heritage site has been done by giving Special awareness raising activities amongst school children and youth.
vii. Inviting local and foreign experts and personalities for conferences and interviews.
viii. Visits to monuments and sites, and restoration works, possibly with free admission.
ix. Organising discussions in cultural-centres, city halls, and other public spaces.