India’s First Lithium Refinery to be Set up in Gujarat

i.The 1st Lithium refinery of India is to be set up in Gujarat. It will  process Lithium ore to produce battery-grade material.
ii.More than Rs 1,000 crore will be invested by Manikaran Power Limited(MPL) to set up this refinery.
iii.MPL will import Lithium ore from Australia and process it in Gujarat.
iv.MPL in 2019 had collaborated with Australian firm Neometals to tap the Mount Marion Lithium mine in Western Australia for Lithium ore.
v.Target – India has set an ambitious goal of increasing the Electric Vehicle numbers to 30% by 2030.
About  Manikaran Power Limited (MPL):
Incepted– 2008
Managing Director– Mr. Navjeet Singh Kalsi
Headquarters– New Delhi, India
<<Read Full News>>

India ranks 3rd in list of Countries with most Publications on AI from 2015-2019, China tops list : Nature Index 2020 Artificial Intelligence 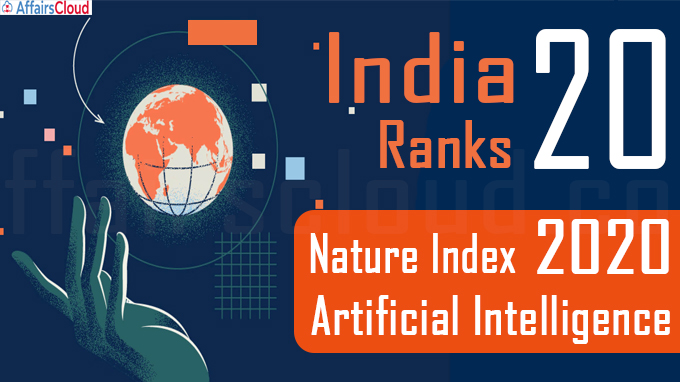 According to the ‘Nature Index 2020 Artificial Intelligence’ released by Nature Research, International Scientific publishing company, India ranked 3rd (with 91,563 publications) in the list of 25 Countries with most publications on Artificial Intelligence (AI) during the period 2015-2019.  China topped the List, followed by the United States. The whole Index is based on the time period between 2015-19.
i.India ranked 20th among 25 countries in artificial intelligence ranked by total article share in the field from 2015 to 2019.
ii.Anna University, Chennai ranked 32nd in Top 100 research organizations in the AI field. It is the only Indian Organization in Top 100.
Top 3 Countries based on Total number of publications in AI:

Top 3 Research Organizations based on Total number of publications in AI: 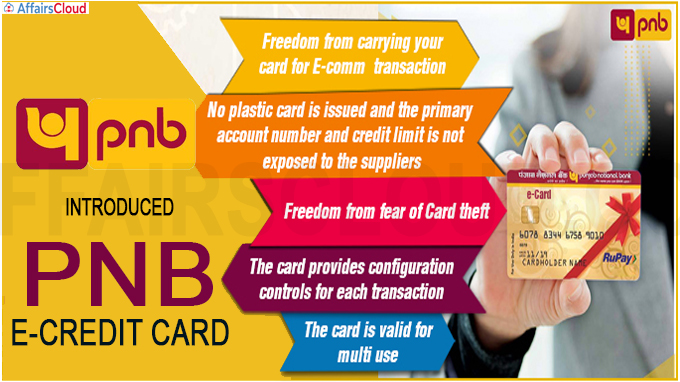 i.On December 24, 2020 Punjab National Bank (PNB) introduced PNB e-Credit Card. ii.This card is a digital imitation of a physical Credit Card.
iii.PNB customers can use this card at any e-commerce platform or merchant website, without having to carry the physical card.
iv.The details of the card can be viewed in PNB Genie Mobile app by clicking on the e-Credit Card facility.
About Punjab National Bank (PNB):
Founded– May 19, 1894
Commenced Operations– April 12, 1895
MD & CEO– CH S.S. Mallikarjuna Rao
Headquarters– New Delhi, India
Tagline– The name you can bank upon
<<Read Full News>> On 25th December 2020, Padma Shri Shamsur Rahman Faruqi India’s renowned Urdu Poet, writer, critic and theorist, passed away at the age of 85 in Allahabad, Uttar Pradesh. He was born on 30th September 1935 in Azamgarh, Uttar Pradesh.
About Shamsur Rahman Faruqi:
i.Shamsur Rahman Faruqi was also a noted lexicographer who worked as a part time professor at the South Asia Regional Studies Center at the University of Pennsylvania, United States of America.
ii.He is regarded as an authority on Ilm-e bayan – the science of poetic discourse – and classical poetry.
iii.He was well known for his contribution to the revival of “Dastangoi” the Urdu oral storytelling art form of the 13th century.
iv.He was the editor of his literary magazine “Shabkhoon”.
Books:
i.Some of his famous works include “Early Urdu Literary Culture and History” (2001), “The Flower-Lit Road: Essays in Urdu Literary Theory and Criticism” (2005) and “Urdu Ka Arambhik Yug” (2007).
ii.His book “Kai Chaand the Sar-e-Asmaan” (2006) has been praised as a masterpiece of Urdu Fiction and its english version “The Mirror of Beauty” was published in 2013.
iii.He translated some of his stories into English, which are included in the book “The Sun That Rose from the Earth” (2014).
Awards:
i.He received the Saraswati Samman in 1996 for “Sher-e Shor-Angez”, a study of Meer Taqi Meer, 18th century poet, which was published in 4 volumes.
ii.He received the Padma Shri for literature & education in 2009.

Robin Jackman, Former England Cricketer and Commentator Passed Away at 75 On December 25, 2020 Robin David Jackman, former England cricketer and commentator passed away at the age of 75 at his home in Cape Town, South Africa.
He was a right handed batsman and right-arm fast-medium bowler(seamer). He was born on 13 August 1945 in Shimla, Punjab, British India(Now Shimla is in Himachal Pradesh).
Note
Alan Gibson, the cricket writer, gave Jackman the nickname of the “Shoreditch sparrow” during his playing career.
About Robin Jackman:
i.As a cricketer, he played 4 test matches, 15 One Day Internationals(ODIs), 399 First class matches and 288 List A matches.
ii.In the 4 test matches he took 14 wickets, and 19 wickets in the 15 ODI’s at an average of 31.47.
iii.He was a member of Surrey side and also played for Western Province in South Africa in 1971–72, and for Rhodesia between 1972–73 and 1979–80.
iv.He announced his retirement in February 1983, later which he entered into broadcasting.
About South Africa(Officially- the Republic of South Africa) :
Capital– Pretoria (executive), Cape Town (legislative), Bloemfontein (judicial).
Currency– South African Rand(ZAR) On December 23, 2020 John Hugh Edrich, former England cricketer passed away at the age of 83 at his home in north Scotland. The Left-hand opening batsman was one of the best English top order batsmen of his generation. He was born on June 21, 1937 in Blofield, Norfolk, England.

About John Edrich:
Playing Career
i.Between 1963 and 1976, he represented England in 77 Tests and 7 One Day Internationals(ODIs).
ii.He scored 5138 runs in Tests at an average of 43.54 and 223 runs at 37.16 in ODIs.
Role as Captain, President
i.He captained England in one Test and also was the captain of Surrey.
ii.He served as the President of Surrey County Cricket Club in 2006-07. 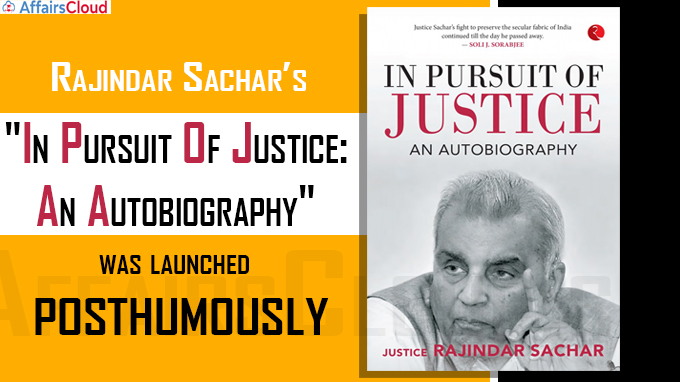 On 22nd December 2020, “In Pursuit of Justice: An Autobiography” the autobiography of the Justice Rajindar Sachar was launched posthumously by his family in association with the Indian Society of International Law(ISIL) and The Indian Law Institute(ILI) over a virtual event organised to mark his birth anniversary. The book has been published by Rupa Publications.
About the book:
i.At the time of his death in 2018, the book consisted of handwritten notes and recorded interviews.
ii.His personal Secretary Niranjan Kaushik transcribed these interviews and the manuscript was edited by Chitra Padmanabhan, an independent journalist and writer.
iii.The book portrays the life events of Justice Rajindar Sachar, a socialist, egalitarian, defender of civil liberties and a humanist who has witnessed India’s Partition in 1947.
About Rajindar Sachar:
i.Rajindar Sachar was born on 22 December 1923 in Lahore, British India (Present day Pakistan).
ii.He became the Judge of the Delhi High Court in 1970 and after his retirement he advocated human rights and civil liberties.
iii.He argued in various important cases for People’s Union for Civil Liberties (PUCL) like mandatory declaration of assets/criminal antecedents of MPs and MLAs, ‘None of the Above’ (NOTA) option for voters, among others.
iv.He was well known for the Sachar Committee report of 2006 which documented the social and economic conditions of Muslims in India. On December 25 2020, Andhra Pradesh Chief Minister YS Jagan Mohan Reddy launched the scheme named Navaratnalu-Pedalandariki Illu (Nine jewels – housing for all the poor), at Komarigiri village of U-Kothapalli block of East Godavari district.
i.A total of 30.90 lakh houses will be constructed by the government by 2024 for the poor people of the state and ensure that every household in the state has a pucca (cemented) house. Rs 50,490 crore would be spent on the construction of houses.
ii.Under the scheme, a house site patta will be issued to the beneficiaries and the patta will be registered in the name of a women’s household. All the beneficiaries will be given 1.5 cents in rural areas or one cent in urban areas.
iii.30.75 lakh beneficiaries have been identified across the State, of which 28.30 lakh houses will be given under 17,000 YSR Jagananna layouts named YSR Jagananna Housing Colonies and another 2.62 lakh are of Township and Infrastructure Development Corporation (TIDCO) flats.
Note : A Patta is a legal document issued by the Government in the name of the actual owner of a particular plot of land. It can also be given to lands with buildings or individual houses etc. constructed on them. 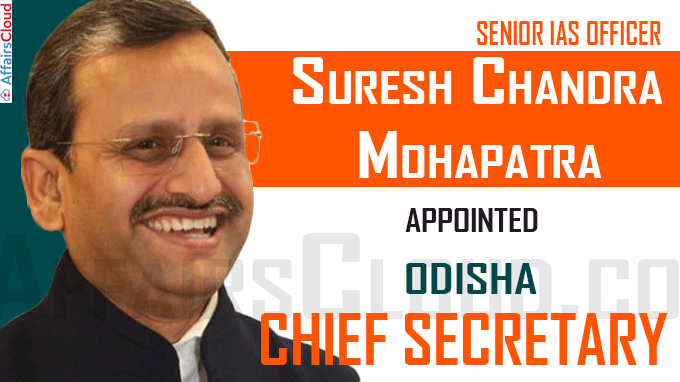 On 25th December 2020, the Government of Odisha appointed Suresh Chandra Mohapatra, a 1986 batch Indian Administrative Service(IAS) officer as the New Chief Secretary of Odisha and he will also hold the post of Chief Development Commissioner. He will succeed Asit Kumar Tripathy who will retire from the service on 31st December 2020.
Presently, Suresh Chandra Mohapatra is serving as the Development Commissioner-cum-Additional Chief Secretary, Planning & Convergence Department, Odisha State Secretariat and holds the additional charge as the working chairman of Shree Jagannath Temple Administration, Puri.
About Suresh Chandra Mohapatra:
i.He served as the first collector of the newly formed Bhadrak district of Odisha in 1993 and he also served as the Collector of Kandhamal district.
ii.He served as the Managing Director of Orissa State Cooperative Milk Producers’ Federation Limited (OMFED) for around 6 years.
iii.He has served as the Chief Administrator of Puri temple for 3 years and served as the Principal secretary of energy department and Water resources.
iv.During his term as the Additional Chief Secretary Forest and Environment Department he started schemes like mega lift, deep bore well, check dams and eco-tourism.
Other Appointments:
i.Asit Kumar Tripathy, the outgoing Chief Secretary has been appointed as the Chairman of the Western Odisha Development Council (WODC). He will also serve as the Principal Advisor to the Chief Minister Naveen Patnaik on regional development, tourism, agribusiness and industry.
ii.Pradeep Kumar Jena, the additional Chief Secretary, Revenue and Disaster Management Department and Special Relief Commissioner, has been appointed as the Development Commissioner-cum-Additional Chief Secretary to the government of Odisha. On December 22, 2020, Assam Cabinet headed by Chief Minister Sarbananda Sonowal approved the ‘Assam Official Language Amendment Bill’ for making Bodo (Devanagari script) also known as Boro as an associate official language of the state. The Bill will now be tabled in the Assam Legislative Assembly .
i.According to the Census 2011, There are ~ 14.16 Lakh Bodo speakers in Assam, which is around 4.53 % of the total population of the state.
ii.Declaration of ‘Bodo’ as associate official language was one of the demands made by 4 Bodo rebel groups & 2 Bodo organizations during the signing of 3rd Bodo peace accord in January, 2020.
‘Bodo’:
i.It is one of the 22 languages listed in the 8th Schedule of the Constitution.
ii.It is spoken in the states of Assam, Arunachal Pradesh, Nagaland, Meghalaya & West bengal.
iii.It is part of Sino-Tibetan language family.
About Assam:
Governor – Jagdish Mukhi
Capital – Dispur
<<Read Full News>>