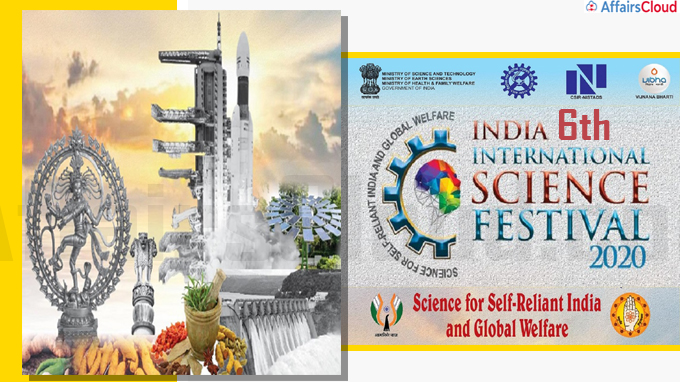 i.Theme of IISF 2020  – “Science for Self-Reliant India and the Global Welfare”.

i.National Education Policy 2020 (NEP 2020) will help in building scientific temper for kids from an early stage.

ii.Emphasize shifted from outlays to outcome, from textbooks to research & application.

The session was inaugurated by Union Minister Harsh Vardhan.

ii.Harsh Vardhan highlighted initiatives taken by the Government of India to connect with Scientists & Technocrats.

i.He stated that Immunoassay Laboratory of Translational Health Science & Technology Institute (THSTI) in Pali, Haryana has been recognized by Coalition for Epidemic Preparedness Innovations (CEPI) as one of the six Global networks of Laboratories for Centralized assessment of COVID-19 Vaccines.

ii.He added that Pandemic has accelerated the process of  digitization, AI & Big Data needed to be used with responsibility & accessibility.

i.The State S&T is held annually as part of the IISF, the conclave acts as a platform for discussing centre-state S&T cooperation.

ii.Harsh Vardhan released a Compendium on the activities done by all State S&T Councils. It can be accessed here. He also inaugurated its web portal.

Responsible Science Communication during disasters such as pandemic was one of the important points of discussion.

i.HarshVardhan emphasized the power of Responsible Science Communication to fight the ‘infodemic’ arising during pandemic.

A Traditional Crafts & Artisan Meet & Expo Programme was held to showcase the Scientific achievements of Indians to students, young researchers & the general public.

ii.The event highlighted the activities of primitive tribes of the country like Agaria, Bharia & other tribes.

iii.The main objective of the program is to make traditional crafts competitive at global level and to make them self-reliable.

During this conclave women scientists & entrepreneurs share their experience.

The 2020 conclave was held based on the theme – “Empowering Divyangjan through Science, Technology & Innovations for Self-Reliance”.

ii.Union Minister for Social Justice and Empowerment, Shri Thawar Chand Gehlot stated that the implementation of Sugamya Bharat Abhiyan will help in realizing the dream of ‘Accessible India-Empowered India’.

ii.The main aim of the event is to reduce the impact of weather vagaries on agriculture and make agriculture a reliable income earning pursuit for marginal stakeholders.

ii.RK Singh, Minister of State (Independent Charge), Ministry of Power & Ministry of New & Renewable Energy stated that by 2030, 40% of established capacity will be from non-fossil fuel.

During the event 5 GWR events were attempted. They are:

i.Harsh Vardhan also inaugurated the Student Science Village 2020-Mega Science Hub, one of the main events of the 6th IISF, 2020.

ii.The main aim of the student science village is to make ‘science enjoyable’ for school students.

Indian Association of the Cultivation of Science (IACS), Kolkata organised the Vigyan Yatra to promote the IISF 2020. Mobile Science exhibitions were started in various cities of India to promote scientific temper & inculcate culture of science among the masses.