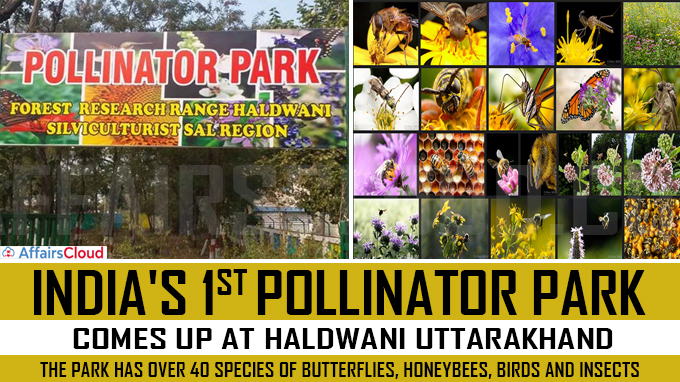 On December 29, 2020, India’s 1st Pollinator Park was inaugurated at Haldwani in Nainital district, Uttarakhand by Peter Smetacek, a butterfly expert.The park has been developed by the Research Wing of Uttarakhand’s Forest Department.Sanjiv Chaturvedi, Chief Conservator of Forest (Research), head of Research Wing, Uttarakhand India was also present during the inauguration.

i.The main objective of the park is to conserve various pollinator species, create awareness among people and promote further research on various aspects

ii.At present the park is home to around 40 different types of pollinator species which includes various species of honeybees, birds & butterflies.

i.The park is spread over an area of 4 acres and suitable habitat has been created at the park by planting nectar & pollination producing saplings.

ii.In order to protect the pollinators, use of all types of chemicals (Pesticides & Insecticides) has been stopped at the park & nearby areas.

iii.The endemic species of Honeybee Apiscerana Indica has also been nurtured in the park.   It is the most common bee pollinator of cardamom in southwestern India.

i.Pollinators impact 35% of Global agricultural land and support production of 87% of leading food crops at the global level.

ii.Without Pollinators existing populations of plants would decline even if other life-sustaining elements were available.

iii.They are on the decline due to pollution, overuse of pesticides & insecticides, disease & changes in climatic patterns.