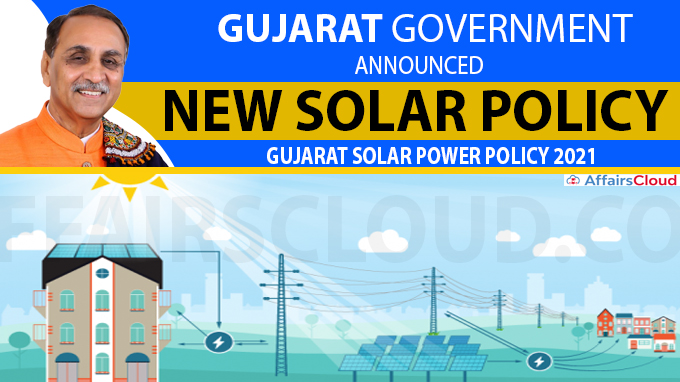 Target – Gujarat has set a target to achieve 30, 000 MW through sustainable energy sources by 2022.

i.Any individual or industry can produce solar power in their premises as per their requirements, there will be no cap on the capacity of Solar power production.

ii.Consumers can lease their roof or premises to a third party for generation & consumption of power on the same premises. They can also sell their surplus power at a tariff of INR 2.25 per unit.

iv.The policy also aims to reduce the power cost to Industry by 50% to help them compete in the Global market.

v.Group of Consumers can set up solar projects for self-consumption as a collective ownership project.

The Security Deposit to be paid by a developer to DISCOM has been reduced from INR 25 Lakh per MW to INR 5 Lakh per MW.

i.Policy has announced various incentives to reduce the share of coal-based power.

ii.Solar Projects which will come up during 2021-25 will be eligible for benefits for a period of 25 years.

i.As of March, 2020, Gujarat had installed around 50, 915 subsidised rooftop solar plants in the residential segment, it is the highest in India.

ii.The success of Gujarat’s policy is due to incentivisation of rooftop installations.