We are here for you to provide the important Recent and Latest Current Affairs 30 December 2020, which have unique updates of Latest Current Affairs 2020 events from all newspapers such as The Hindu, The Economic Times, PIB, Times of India, PTI, Indian Express, Business Standard and all Government official websites. 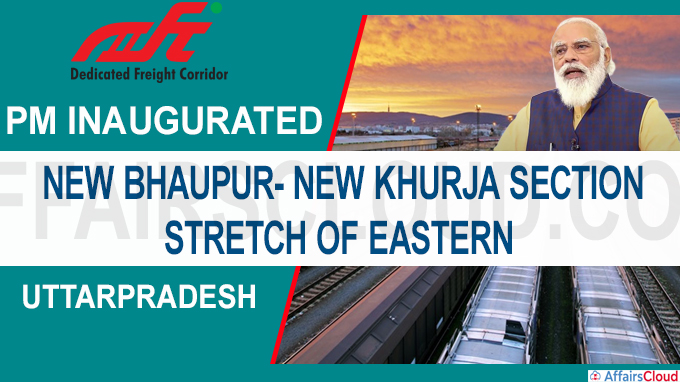 On December 29, 2020, Prime Minister (PM) Narendra Modi virtually inaugurated 2 Railway projects for the Eastern Dedicated Freight Corridor (EDFC) namely the 351-Kms long New Bhaupur-New Khurja section in Uttar Pradesh (UP) which has been built at a cost of INR 5, 750 crores and Operational Control Centre (OCC) at Prayagraj, Uttar Pradesh. It is expected to be one of the largest control centers in the world.
New Bhaupur-New Khurja section:
i.The inauguration of the section will benefit local industries in Uttar Pradesh as 60% of EDFC falls in the state.
ii.It will decongest the Kanpur-Delhi mainline and enable Indian Railways to deploy faster trains.
PM flags off 100th Kisan Rail:
On December 28, 2020, PM virtually flagged off the 100th ‘Kisan Rail’ from Sangola (Maharashtra) – Shalimar (West Bengal).The 1st Kisan Rail was introduced from Devlali (Maharashtra) – Danapur (Bihar) on August 7, 2020. It was extended up to Muzaffarpur in Uttar Pradesh.
About Ministry of Railways:
Union Minister – Piyush Goyal
Headquarters – New Delhi
<<Read Full News>> 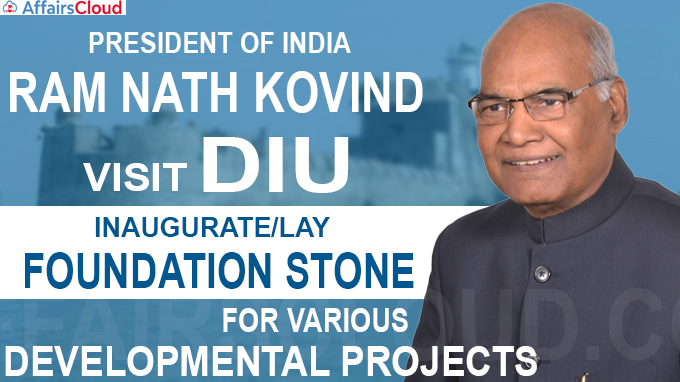 The Gender Park, an initiative of Kerala Government in partnership with United Nations (UN) Women will organize the 2nd edition of the International Conference on Gender Equality (ICGE-II) at Gender Parks Kozhikode campus in February 2021. The conference will be 3-days long and the theme of the event will be ‘Gender in Sustainable Entrepreneurship and Social Business: The Mediating Role of Empowerment’. The event will take place in a partially-digital format due to the Pandemic. The 1st edition ICGE was hosted by the Gender Park in November, 2015.

On December 28, 2020 India hoisted ‘Blue Flags’ on its 8 beaches. Blue Flag certification is an eco-label given by Foundation for Environment Education, Denmark for beaches that meets its stringent environmental, educational, safety-related and access-related criteria. The label signifies India’s efforts to safeguard its coastal region. In October 2020 India became the First Country to be awarded the Coveted International Blue Flag certification for 8 beaches in one attempt. Click here to read the news. According to the report ‘Foreign Direct Investment Trends and Outlook in Asia and the Pacific 2020/21’ released by the United Nations Economic and Social Commission for Asia and the Pacific (UN ESCAP), India has accounted for 77% of total Foreign Direct Investment (FDI) inflows to South & South-West Asian subregion receiving about USD 51 Billion in 2019.
i.The majority of the FDI in India was in the fields of Information & Communications Technology (ICT) & Construction sector.
ii.Apart from the services sector, India is attracting investments in local digital ecosystems such as e-commerce.
iii.Uneven spread of FDI outflows in the region, only 2 countries – India & Turkey accounted for the majority of outflows in 2019.
iv.The pandemic has caused Global FDI flows to drop by 49% in the first 2 quarters of 2020.
Click Here to Read the Full Report
About   UN Economic and Social Commission for Asia and the Pacific (UN ESCAP):
Executive General – Armida Salsiah Alisjahbana
Headquarters – Bangkok, Thailand
<<Read Full News>> 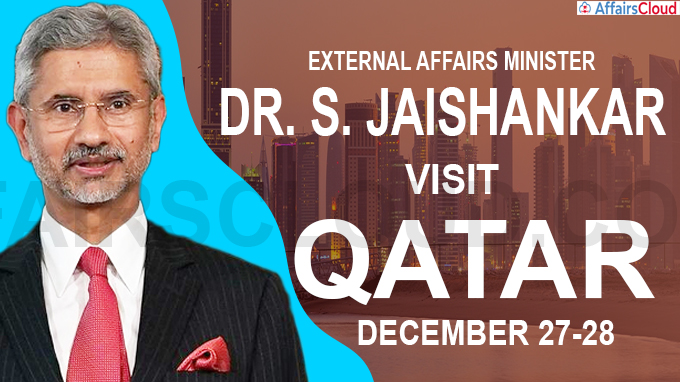 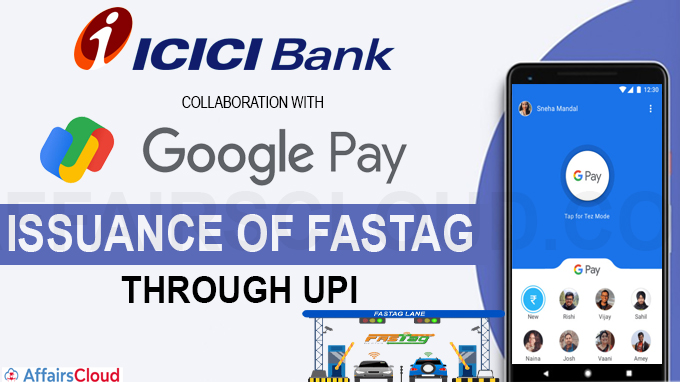 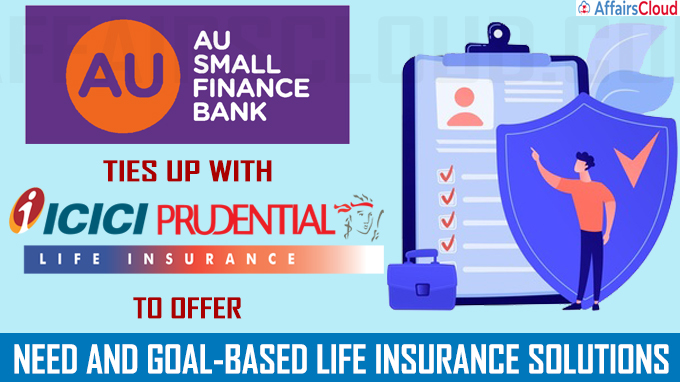 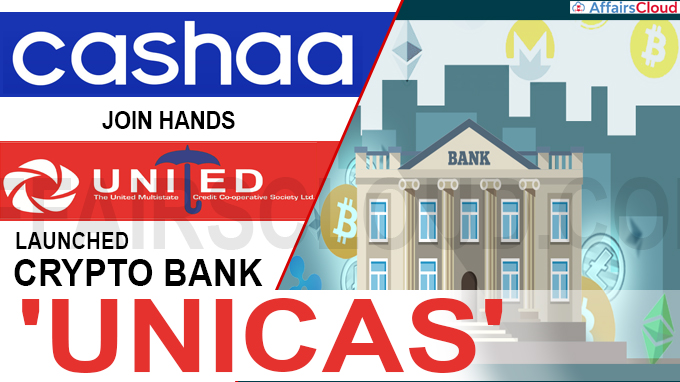 On December 28, 2020 Suryoday Small Finance Bank(SFB) received approval from Securities and Exchanges Board of India (SEBI) to float its Initial Public Offering (IPO).  The shares of the SFB is expected to be listed on BSE Sensex and NSE Nifty. The IPO will consist of a fresh issue of 1,15,95,000 shares and also offers a sale of up to 84,66,796 shares by the existing shareholders. The International Financial Corporation (IFC), Gaja Capital, HDFC Holdings, IDFC First Bank, Kotak Mahindra Life Insurance Company, DWM (International) Mauritius and Americorp Ventures will offer shares through the Offer for sale(OFS) route. On December 10, 2020 Jairam Ramesh, Rajya Sabha MP & Former Union Minister for his book  ‘A Chequered Brilliance: The Many Lives of V.K. Krishna Menon’ and Associate Prof Amit Ahuja, for his book ‘Mobilizing the Marginalized: Ethnic Parties without Ethnic Movements’ jointly won Kamaladevi Chattopadhyay New India Foundation(NIF) Book Prize 2020.
Prize Money & Trophy
The winners will share the  prize money of 15 lacs and each of them will receive the Book Prize trophy.
Gist about the Books
A Chequered Brilliance: The Many Lives of V.K. Krishna Menon
The book was  published by Penguin Random House.
It is a biography of V.K. Krishna Menon, an Indian politician, non-career diplomat and nationalist who wrote the first draft of the Preamble to the Constitution of India and initiated the idea of the Constituent Assembly of India.
‘Mobilizing the Marginalized: Ethnic Parties without Ethnic Movements’
The book was published by Oxford University Press.
It is the 1st book by the scholar. The book portrays the reason why Dalit ethnic parties perform poorly in states where their social mobilization has historically been strong, and perform well in states where such mobilization has historically been weak.
About Jairam Ramesh
He served as the union minister between 2006 and 2014 in different ministries.
He has authored several books including Indira Gandhi: A Life in Nature and Intertwined Lives: P.N. Haksar and Indira Gandhi among others.
About Amit Ahuja
He is an Associate Professor of Political Science at the University of California, Santa Barbara.
About the NIF Book Prize:
The annual prize was established in 2018. It builds on the NIF’s mission to support high-quality research and writing on all aspects of Independent India.
It is given to the best non-fiction book on modern/contemporary India by emerging writers from all nationalities, published in the previous calendar year.
It was named after Kamaladevi Chattopadhyay, Indian social reformer and freedom activist.
About New India Foundation:
Headquarters– Bangalore(Bengaluru), Karnataka
Managing Trustee– Manish Sabharwal i.On 28th December 2020, the Harmony Foundation hosted the 16th annual Mother Teresa Memorial Awards(MTMA) for Social Justice, to felicitate the acts of compassion of the people during the times of global pandemic.
ii.The theme of the MTMA for Social Justice 2020 is “Celebrating Compassion in Times of Covid”.
iii.This is the only award endorsed by Sister Mary Prema Pierick, the Superior General of the Missionaries of Charity, Kolkata, West Bengal.
About Harmony Foundation:
Harmony Foundation is an international NGO that focuses on the field of Social Justice.
Founder- Dr. Abraham Mathai
Founded in– October 2005
Headquarter – Mumbai, Maharashtra.
<<Read Full News>> 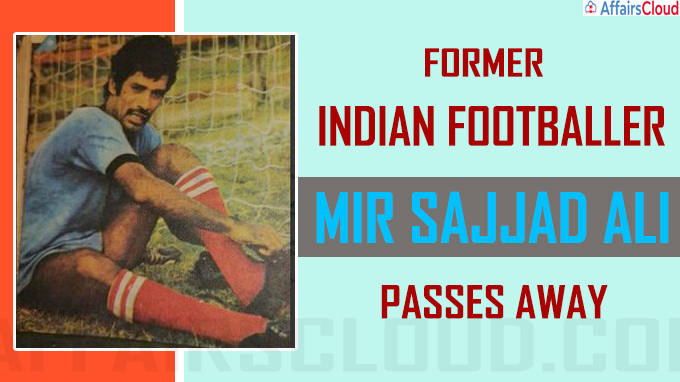 On December 23, 2020 Mir Sajjad Ali,  Former Indian international footballer, passed away at the age of 66. He is a resident of Zeba Bagh in Asif Nagar, Hyderabad, Telangana.
About Mir Sajjad Ali:
i.He played for BDL in the local league. He became the left winger.
ii.He was a member of the Indian team at the Aga Khan Gold Cup in 1977 in Dhaka. He represented Bengal in the Santosh Trophy.
iii.He later played for East Bengal and Mohammedan Sporting. On 27th December 2020, Chief Minister(CM) of Madhya Pradesh(MP) Shivraj Singh Chouhan released the book titled “Elements of Quantitative Genetics:A Conceptual Approach” authored by Prof. Dr. Stuti Sharma of Jawaharlal Nehru Agricultural University, Jabalpur, MP. Manoranjan Biswal is the co-author of the book.
Key People:
Kamal Patel, Agriculture Minister of MP,  Vishnu Dutt Sharma, Member of Parliament(MP) from Khajuraho and State BJP President and Lokendra Parashar of BJP were present during the release of the book.
About the book:
i.The book presents complex subjects like Plant Breeding Genetics in a simple manner which will help the students in BSc, MSc , PhD students and other researchers.
ii.This will also assist the candidates preparing for competitive examinations.