We are here for you to provide the important Recent and Latest Current Affairs 14 October 2020, which have unique updates of Latest Current Affairs 2020 events from all newspapers such as The Hindu, The Economic Times, PIB, Times of India, PTI, Indian Express, Business Standard and all Government official websites.

Kerala Govt Sets Up ‘Kerala Karshaka Kshemanidhi Board’, 1st of its Kind Welfare Board for Upliftment of Farmers Kerala Government has formed ‘Kerala Karshaka Kshemanidhi Board’ (Kerala Farmers Welfare Fund Board) – a Board for upliftment of Farmers in the State.  It is the first time in India that a Welfare Fund Board has been formed for upliftment of farmers.
The State Cabinet has appointed Dr. P. Rajendran as Chairman of Kerala Farmers Welfare Fund Board.
About Kerala:
Mountains – Anamudi, Agasthyamalai, Ponmudi, Meesapulimala.
Dance – Kathakali, Theyyam, Mohiniyattam, Thiruvathirakali, Chakyarkoothu, Koodiyattam.
<<Read Full News>> 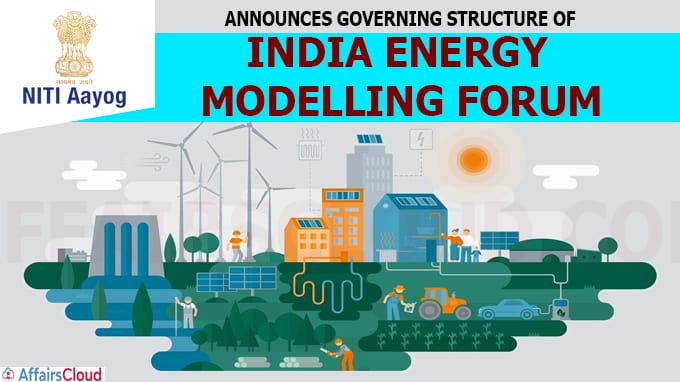 i.On July 2, 2020, NITI (National Institution for Transforming India) Aayog and United States Agency for International Development (USAID) jointly launched the India Energy Modelling Forum (IEMF) under the US–India Strategic Energy Partnership (SEP). Now, for its constitution, on October 8, 2020 NITI Aayog announced its governing structure consisting of an inter-ministerial and a steering committee.
ii.About inter-ministerial committee: It will be convened by NITI Aayog and headed by its Chief Executive Officer (CEO) (Presently Amitabh Kant). It will review the studies/modelling activities and provide directions and new areas of research.
iii.About steering committee: It will shortlist policy issues to be taken up for study and might form various taskforces depending on the specific studies/modelling exercises to be carried out. The convener of this committee will be selected on a rotational basis for two years and will act as the interface between the inter-ministerial and steering committees and the working groups. 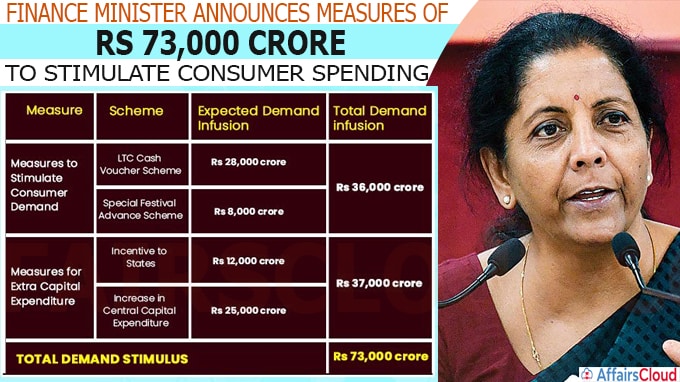 i.On October 12, 2020, Union Minister for Finance & Corporate Affairs Nirmala Sitharaman announced measures of Rs 73,000 crore to stimulate consumer spending before the end of this Financial Year (FY21) to fight the COVID-19 lockdown induced slowdown, during a press conference in New Delhi.
ii.The allocation was made under the two heads- Consumer Spending and Capital Expenditure.
Consumer Spending i.For the first time a report on stillbirths titled “A Neglected Tragedy: The Global Burden of Stillbirths” has been  released by UN Inter-Agency Group for Child Mortality Estimation (UN-IGME) which was co-created by United Nations Children’s Fund (UNICEF), World Health Organisation (WHO), World Bank and the United Nations (UN) Department of Economic and Social Affairs, Population Division.
ii.In accordance with the report a stillborn baby is delivered every 16 seconds which means nearly two million infants in a year never take their first breath.
iii.Half of the stillbirths and 44% of the global live births occurs in 6 countries viz. (highest to lowest) – India, Pakistan, Nigeria, Democratic Republic of the Congo, China, and Ethiopia.
iv.Key factors behind stillbirth: Poor quality of pregnancy and delivery care, a lack of antenatal and intrapartum services and weak nursing and midwifery workforces.
About United Nations Children’s Fund (UNICEF):
Executive Director– Henrietta Fore
Headquarter– New York, United States of America (USA) 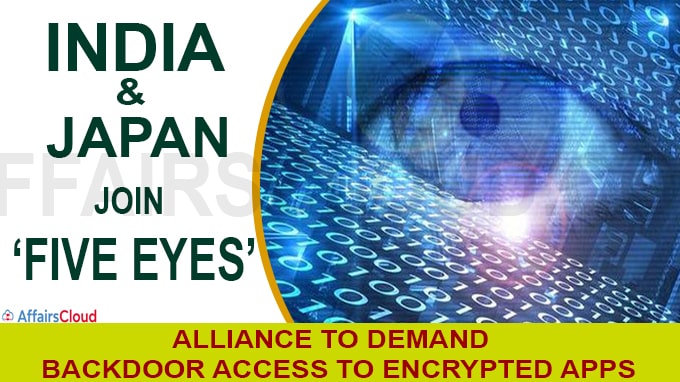 Members of the Five Eyes Intelligence Alliance (United States of America, United Kingdom, Canada, Australia, and New Zealand.)  Along with India, Japan has asked Big Tech Companies to find a solution for Law Enforcement Agencies to access end-to-end encrypted chats. The Countries highlighted that encryption has become a tool for terrorists and child traffickers, and poses risk to thousands of innocent lives.
India, Japan are not members of the Intelligence Alliance.
<<Read Full News>> 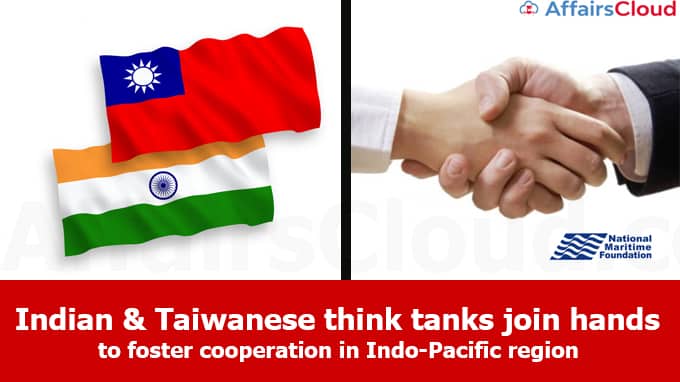 Climate Change to Blame for Doubling Disaster: The Human Cost of Disasters: an Overview of the Last 20 years (2000-2019) – Report of UNDRR The United Nations Office for Disaster Risk Reduction(UNDRR) published the report titled “The human cost of disasters: an overview of the last 20 years (2000-2019)” which states that climate change is the major cause for the doubling of natural disaster in the past 20 years (2000- 2019).
The report was released to mark the International Day for Disaster Risk Reduction on 13th October 2020.
Highlights of the Report:
i.The report stated that around 7348 major disasters that occurred between 2000 and 2019, which claimed the lives of more than 1.23 million people and affected 4.2 billion people across the globe.
ii.These disasters resulted in around 2.97 trillion USD losses in the global economy.
iii.The increase of natural disasters compared to the previous 20 years (1980 to 1999) which was around 4212 disasters were explained by the rise of climate related disasters.
iv.Compared to the previous 20 years the climate related disasters increased from 3,656 to 6,681, the number of major floods increased from 1,389 to 3,254 and the storms increased from 1,457 to 2,034.
v.The report also discussed the major increase in drought, wildfires and extreme temperature.
vi.The report also states that the geophysical disasters like earthquakes and tsunamis have claimed more lives than other natural disasters.
Note:
The report did not include the biological hazards and disease related disasters. 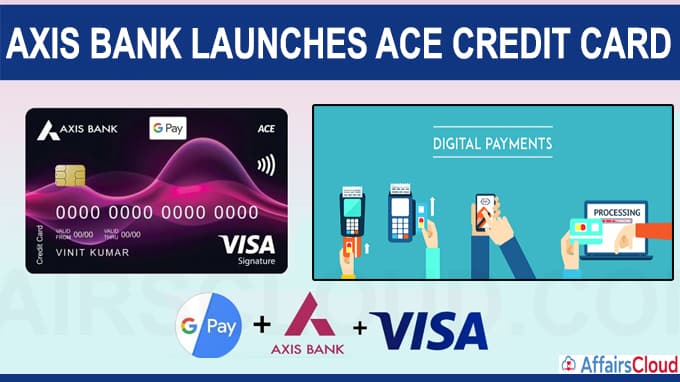 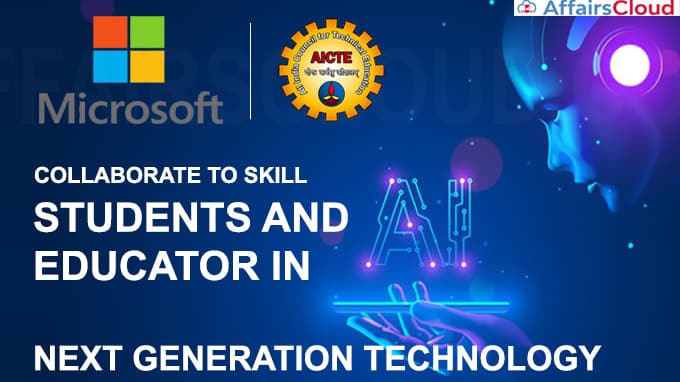 Mastercard Partners with Signzy for Global Rollout of Video KYC 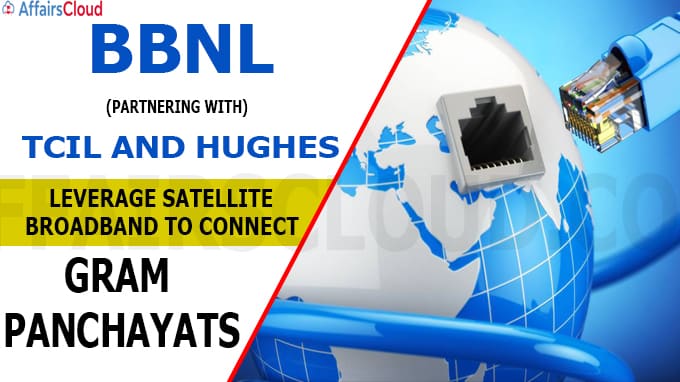 On 8th October 2020, American Athlete Charlie Moore, 1952 Olympic 400 metre(m) Hurdles Champion passed away due to pancreatic cancer at the age of 91. He was born in August 1929 in Pennsylvania, United States of America(USA).
About Charlie Moore:
i.Charlie Moore won the 1952 USA trail in 50.7 seconds, which made him the 2nd man to break the 51 seconds after Glenn Hardin, 1936 Olympic Champion.
ii.Charlie Moore won the gold in the 1952 Helsinki Olympic 400m Hurdles in 50.8 seconds and tied his Olympic record he set in the quarterfinals.
iii.He also won the silver medal for USA 1600-meter relay team during the 1952 Helsinki Olympic game.
iv.He donated his two Olympic Medals to Mercersburg Academy, Pennsylvania.
v.At the British Empire Games 1952 in London, Moore set a world record in the 440 hurdles in 51.6 seconds.
Career:
i.He served as the CEO of various multinational manufacturing companies.
ii.He became the public sector director of the US Olympic Committee and chaired the audit committee from 1992 to 2000.
iii.He served as the Governor of the National Art Museum of Sport.
Awards & Honours:
i.He was ranked 5th in the World in 1924 and topped the world’s list from 1949 to 1952.
ii.He was inducted into Cornell’s Athletic Hall of Fame in 1978.
iii.He was also inducted into the USA Track and Field Hall of Fame in 1999.
Books:
He published 2 books ‘Running on Purpose: Winning Olympic Gold, Advancing Corporate Leadership and Creating Sustainable Value’ and ‘One Hurdle at a Time: An Olympian’s Guide to Clearing Life’s Obstacles’ in 2017. 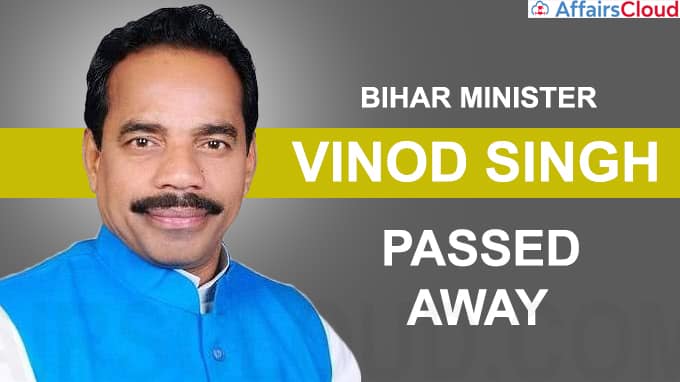 On October 12, 2020  Vinod Kumar Singh( also called as Vinod Singh), Bihar Minister for Backward and Extremely Backward Classes Welfare passed away in Medanta Hospital in Delhi, following a brain haemorrhage. He was around the age of 50.
He was a BJP(Bharatiya Janata Party) MLA(Members of the Legislative Assembly) from Pranpur Assembly constituency of Katihar district in northeast Bihar.
About Vinod Singh 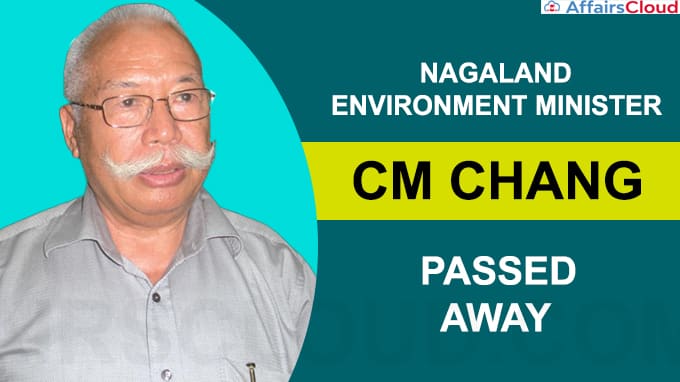 On October 12, 2020 Chongshen Mongkosungkum(C.M.) Chang, Nagaland’s Minister of Environment, Forest & Climate Change and Justice & Law passed away at the age of 78 in Naga Hospital Authority in Kohima. He was a member of Nationalist Democratic Progressive Party (NDPP). He was also a former Lok Sabha MP(Member of Parliament). He was born on April 1, 1942, in Noksen Village, Tuensang district in Nagaland.

About C.M.Chang
i.He was a retired IAS(Indian Administrative Service) officer.
ii.He served as Secretary in the Department of Youth Resources and Sports, Government of Nagaland until his voluntary retirement in 2002.
iii.In 2003, he started his political career. He was elected to the 15th Lok Sabha from the Nagaland Lok Sabha constituency, in 2009, on Nagaland People’s Front(NPF) ticket.
iv.He was elected from 51/Noksen (Vidhan Sabha constituency) in 2013 and became the Minister of Education.
v.In 2018, he won the general election and was appointed as the Minister of Environment, Forest & Climate Change and Justice & Law, on NDPP ticket. 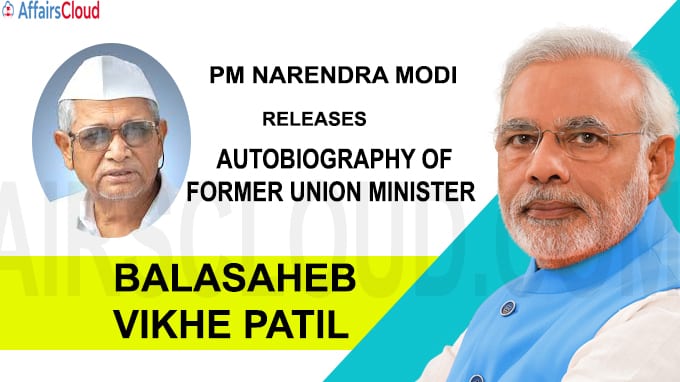 HDFC Bank and Apollo Hospitals Partners to Launch the HealthyLifeProgramme, a 1st of its kind Initiative of India

HDFC Bank and Apollo Hospitals partnered to launch The HealthyLifeProgramme, a holistic healthcare solution which makes healthy living accessible and affordable on Apollo’s digital platform, Apollo 24|7. It is a first-of-its-kind initiative in India. It is exclusively created for HDFC Bank customers who will get round the clock access to the emergency Apollo Doctor at free of cost on Apollo 24|7. It was launched digitally by Aditya Puri, Managing Director of HDFC Bank.

Nilesh Shah, MD of Kotak AMC is Re-Elected as the Chairman of AMFI

On 13th October 2020, Nilesh Shah, the Managing Director(MD) of Kotak Mutual Fund was re-elected as the Chairman of the Association of Mutual Funds in India (AMFI). He will hold the office of chairman till the conclusion of the next Annual General Meeting(AGM) and he will also continue as the chairman of the AMFI Financial Literacy Committee.

Saurabh Nanavati, CEO of Invesco Mutual Fund was re-elected as the vice chairman of AMFI and A Balasubramanian, CEO of Aditya Birla Sun Life Mutual Fund, will continue as the chairman of the valuation committee.

World Economic Forum (WEF) has changed the venue of the Annual Meeting 2021 from Davos to Lucerne-Burgenstock, Switzerland. The meeting will be held from May 18 to 21, 2021 on the theme “The Great Reset”, it will be held both in physical and digital modes. The changes have been made due to the Pandemic.