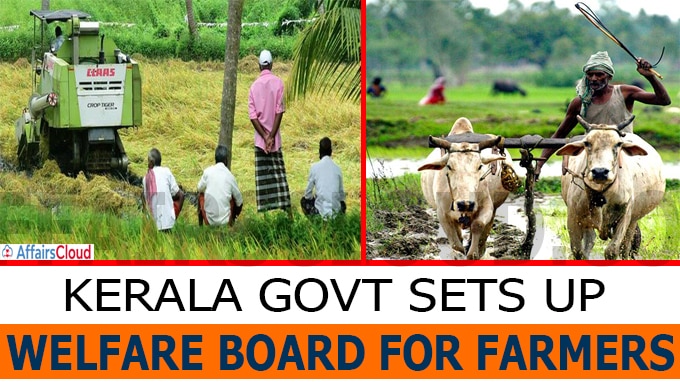 The State Cabinet has appointed Dr. P. Rajendran as Chairman of Kerala Farmers Welfare Fund Board.

i.Farmers can become members of the Board by paying INR 100 as registration fee and a monthly fee of INR 100. They can pay it together for six months or one year.

ii.The government will pay an equivalent share of upto INR 250 to members of the Welfare Fund.

i.The benefits provided to the Board Members will include personal pension, family pension, sickness benefit, disability benefit, medical assistance, marriage and maternity allowance, education assistance and posthumous benefits. The benefit will be extended for marriage of women members and daughters of members of Welfare Fund.

ii.The Board will pay pension upto the age of 60 years for members who have been rendered disabled and will not be able to continue farming as occupation.

iii.Disability benefits will be paid for people who have become physically handicapped due to accidents or illness.

i.September 8, 2020, According to the report “Household Social Consumption: Education in India conducted by National Statistical Office (NSO), Kerala emerged as the most literate state in the country with 96.2% literacy.