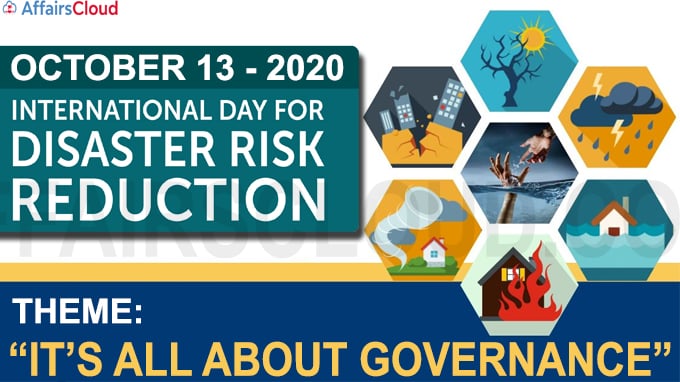 The United Nations (UN)‘s International Day for Disaster Risk Reduction or International Day for Disaster Reduction (IDDR) is annually observed across the globe on 13th October to promote a global risk awareness and disaster reduction. The day celebrates the methods followed by people and communities to reduce the exposure to disaster and to raise the awareness on the importance of controlling the risk they face.

The first International Day for Disaster Risk Reduction was observed in 1989.

The theme of International Day for Disaster Risk Reduction 2020 is “it’s all about governance” which is associated with the Target E of Sendai Framework.

ii.This was followed by the UNGA resolution in 2009 which designated 13 October as the International Day for Disaster Reduction in 2009, replacing the earlier version of the day to promote a global culture of risk awareness and disaster risk reduction.

i.The Sendai Framework for Disaster Risk Reduction, is a people focused and action oriented approach to the disaster risk reduction which can be applied to both small scale and large scale disasters caused by man-made hazards or natural hazards.

ii.This approach can also be used to disasters related to environmental, technological and biological hazards and risks.

The Seven Targets of Sendai Framework:

Target D: To reduce disaster damage to critical infrastructure and disruption of basic services, among them health and educational facilities, including through developing their resilience by 2030.

Target E: To increase the number of countries with national and local disaster risk reduction strategies by 2020.

Target F: To enhance international cooperation to developing countries through adequate and sustainable support to complement their national actions for implementation of the present Framework by 2030.

Target G: To increase the availability of and access to multi-hazard early warning systems and disaster risk information and assessments to people by 2030.

The United Nations Office for Disaster Risk Reduction (UNDRR) launched the report titled The Human Cost of Disasters: An Overview of the Last 20 years (2000-2019) to mark the IDDR 2020.

i.The UNDRR works with the experts and innovators to enquire about the state of risk across the globe and highlight the new and emerging trends, find significant disturbing patterns, behaviours and presenting progress in risk reduction.

ii.The finding of these investigations are published in the 2019 Global Assessment Report on Disaster Risk Reduction.