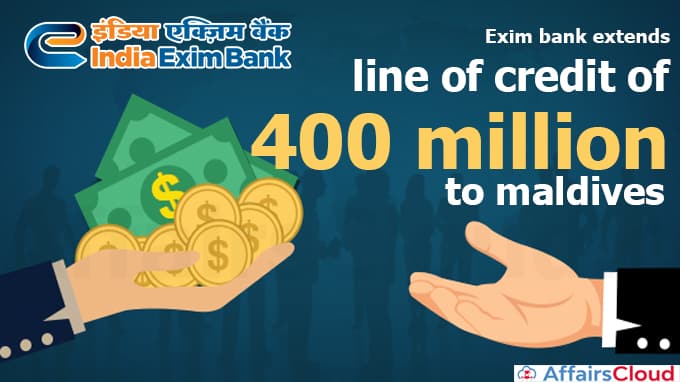 On 12th October 2020, The Export-Import(Exim) Bank of India has extended a 400 million USD (around Rs.2933 crore) line of credit(LoC) to the Republic of Maldives for the Greater Malé connectivity project. The LoC was signed by Nirmit Ved, The General Manager of Exim Bank and Ibrahim Ameer, Finance Minister, Government of Republic of Maldives in Malé, Maldives.

On behalf of the Government of India Exim Bank has extended 3 LoCs of value 1240 million USD (around Rs. 9094 crore) to the government of Republic of Maldives.

i.The LoCs of Exim bank promote the exports of India and showcase the Indian Expertise and project execution capabilities in the developing markets.

ii.Exim bank has 266 LoCs in place covering around 62 countries in Africa, Asia, Latin America, and Commonwealth of Independent States(CIS), with a credit commitment of more than 26.40 billion USD, which is available for financing exports from India.

i.On June 12, 2020, Export-Import Bank of India (EXIM Bank), a specialized financial institution wholly owned by Government of India (GoI), has provided a line of credit (LOC) of $215.68 million to the Malawi government.

ii.On June 19, 2020 Export-Import(EXIM) Bank on behalf of the Indian Government, extended a Line of Credit(LOC) of USD 20.10 million to the Government of the Republic of Nicaragua for the reconstruction of Aldo Chavarria Hospital.