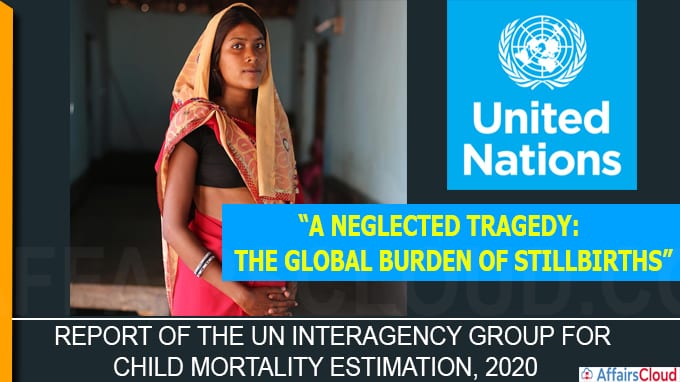 For the first time a report on stillbirths titled “A Neglected Tragedy: The Global Burden of Stillbirths” has been  released by UN Inter-Agency Group for Child Mortality Estimation (UN-IGME) which was co-created by United Nations Children’s Fund (UNICEF), World Health Organisation (WHO), World Bank and the United Nations (UN) Department of Economic and Social Affairs, Population Division.

Key factors behind stillbirth: Poor quality of pregnancy and delivery care, a lack of antenatal and intrapartum services and weak nursing and midwifery workforces.

Key Points from the Report:

-Globally, the stillbirth rate declined by 35% since 2000, but, despite advances in health services from 2000 to 2019, the annual stillbirth reduction rate was just 2.3%, compared with a 2.9% reduction in neonatal mortality, and 4.3% in mortality among children aged one to 59 months.

-Stillbirths are also a challenge for high-income countries due insufficient knowledge of mother and lack of access to sufficient quality health care for ethnic minorities.

-Notably, there is 50% reduction in healthcare services amid COVID-19 pandemic which could cause nearly 200,000 additional stillbirths in the upcoming year in 117 low-and middle-income countries.

-There are no targets specific to stillbirths in the 2030 Agenda for Sustainable Development.

-Half of the stillbirths and 44% of the global live births occurs in 6 countries viz. (highest to lowest) – India, Pakistan, Nigeria, Democratic Republic of the Congo, China, and Ethiopia.

–India, Pakistan and Nigeria alone accounted for a third of the total burden of stillbirths and 27% of live births.

i.Udit Singhal (18 years), the founder of Glass2Sand, a zero waste ecosystem to control the increasing menace of glass waste in Delhi, has been named to the 2020 Cohort of young leaders for the Sustainable Development Goals(SDGs) by the UN.

ii.As per the United in Science 2020 report, the second in a series highlighted that the world is nearing the temperature limit set by global leaders 5 years ago and may exceed it in the next decade or so. In the next 5 year, the world has about a 1-in-4 chance to experience a year that is hot enough to keep the global temperature at 2.7 degrees (1.5 °C-degrees Celsius) above pre-industrial times.