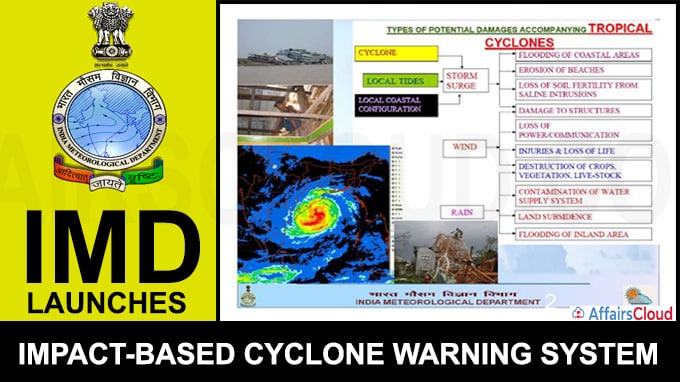 On October 12, 2020 India Meteorological Department(IMD) launched a dynamic,
impact-based cyclone warning system to reduce economic losses and damage to
property caused by the cyclones that hit Indian coast annually. The system has been
commissioned from this cyclone season (October-December).

Key Info
i.As part of the new system, location-wise or district-specific designed warnings will be
prepared and disseminated, which also accounts for the local population, infrastructure,
settlements, land use and other elements.

ii.The cartographic, geological and hydrological data that are available for the district
concerned, will be extensively used by all disaster management agencies.

i.IMD, under the chairmanship of Mrutyunjay Mohapatra, has organized an online pre-cyclone exercise meeting, to review the preparedness, take stock of requirements, plan for the cyclone season October-December, 2020 and share IMD’s new initiatives with stakeholders.

i.In the pre- and post-monsoon months that are known for cyclone genesis, the major impact can be seen.

ii.A favourable atmosphere and sea conditions for the occurrence of cyclonic storms is offered by the post-monsoon months of October and November. The storms particularly affect coastal Andhra Pradesh, Odisha and West Bengal in east coast and Gujarat in west coast.

iii.The storms during October to December, especially in the Bay of Bengal, are known to destroy the eastern coast of the country and also damage property.

Cyclones are multi-hazardous in nature and so cause heavy rain, strong winds and storm surge over the affected region simultaneously. This is along with the property loss.

IMD is functioning under the Ministry of Earth Sciences(MoES), Government of India. It is headquartered in New Delhi.