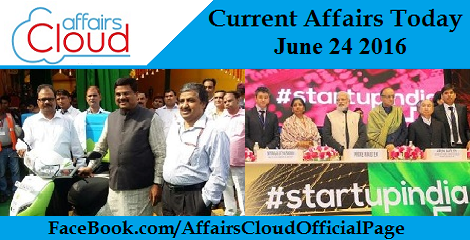 Railway minister flags off Danapur-Saharsa Janhit Express
i. Union Railway Minister Suresh Prabhu flagged off a new train service between Danapur and Saharsa in Bihar over video-conferencing in New Delhi targeting to connect every region of the country with the rail network.
ii. The Minister also announced the extension of three train services in Bihar and Jharkhand.
♦ Jaynagar-Saharsa Janki Express was extended up to Katihar.
♦ Patna-Murliganj Koshi Express was extended up to Purnea Court.
♦ Jasidih-Chandan passenger train was extended up to Banka.
iii. It is the first passenger train to run on the newly constructed Chandan-Banka line.

Union Government approved setting up of District Level Advisory and Monitoring Committees
i. Urban Development Ministry approved the setting up of District Level Advisory and Monitoring Committees to promote people centric planning and execution of new urban development schemes.
ii. These committees will comprise of elected representatives, thus giving Members of Parliament (MP) and Members of Legislative Assembly (MLA) a say in the implementation of the urban development schemes such as HRIDAY, AMRUT, SBM, etc.
iii. The Chairperson of the Committee will be senior most Member of Parliament appointed by the State/UT and District Collector or Municipal Commissioner of metropolitan cities will be the Member Secretary.

MoU singed between RD Ministry & ISRO for geo-tagging assets
i.  A MoU was signed between the Rural Development Ministry and ISRO, Department of Space for geo-tagging the assets created under MGNREGA in each gram panchayat.
ii. The move comes government seeking for online recording and monitoring of assets to check leakages and for effective mapping of terrain for future developmental works.
iii. Upon the MGNREGA over 30 lakh assets are formed yearly across the country and the Ministry has decided that through convergence with other schemes, the geo-tagging of such assets will be done on a mission mode.

Centre to make Assam as petroleum hub for South Eastern countries
i. Union government is planning to make the Assam as a hydrocarbon hub to meet petroleum requirements of Bhutan, Bangladesh, Myanmar and other Southeast Asian countries by 2030.
ii. This fiscal centre would raise Rs 6,000 crore through public sector oil companies in Assam’s petroleum sector in the current fiscal that would be primarily invested in exploration and production and increasing pipeline network.
iii. This will be a part of the total Rs 80,000 crore investment to take the oil and gas production in Assam to 9.4 million metric tonnes by 2030 as part of Centre’s ambitious plan to make Assam the petroleum hub of Southeast Asia.

Britain votes to exit EU in historic referendum
United Kingdom voters have polled to exit from the European Union in a historic referendum.
Effects:
♦ UK Prime Minister David Cameron announced the resignation as he is actively campaigned for the membership in EU
♦ According to S&P Dow Jones Indices, Global markets lost $2.08 trillion
♦ Moody’s Investors Service downgraded the U.K.’s sovereign debt rating from stable to negative.
♦ More than 400,000 Britain people have signed a petition to exit from the EU.

Nagpur inks sister city pact with Jinan in China
i. Nagpur Municipal Corporation (NMC) and Jinan inked the agreement to be sister cities that allows for exchange of ideas and technology in the fields of education, sports, youth affairs, urban planning among other areas.
ii. The agreement valid for five years and can be extended by another five years. The pact is also a part of an agreement signed between the Ministry of External Affairs and the Ministry of Foreign Affairs, Peoples Republic of China in May 2013.

Government amended Income Tax rules to end uncertainty over General Anti-Avoidance Rules
Union Government has decided to amend the Income Tax Rules to end the improbability over the General Anti Avoidance rules as it is expected to start with effective from 01.04.16
About General Anti Avoidance Rules:
An Anti-Tax avoidance regulation of India
Focused at transactions made particularly to avoid taxes
Introduced by: Pranab Mukherjee, then Finance Minister during 2012
Initiated during: 2012 Budget Session.
During the 2015 Budget session, Finance Minister Arun Jaitley announced that its implementation will be delayed by 2017.

a Cash –Less India and ensuring access of mobile banking services to even basic phone users.
ii. The Vision document focusing on the ways of developing the infrastructure and regulations in the country to reduce cash transactions and increase use of technology.
iii. The document of RBI reads that service providers will be fortified to use technology to deliver innovative easy to use mobile grounded payment solutions in an interoperable environment without compromising on security.
iv. The Policy document also aims in leveraging on 5Cs – Coverage, Convenience, Confidence, Convergence, Cost that focuses on responsive regulation, robust infrastructure, effective supervision and customer centricity.

Cygni Energy is first firm to benefit from Start-Up India

i. Hyderabad headquartered Cygni Energy becomes first startup to avail benefits under Start-up India Action Plan offered by the government after it met the required criteria of being an innovative business.
ii. The company works in the renewable energy sector and was founded a year ago is the only company that is set to get the benefit since the plan was announced in January.
iii. Cygni Energy is applying for patent under the fast-track mode meant for startups for its inverterless solar energy technology. Sanjay Mittal from the Department of Aerospace Engineering, IIT, Kanpur.
ii. He has been honored for his contributions in the area of Bluff Body Flows flows past blunt bodies associated with large unsteady separation and leading to large fluid forces.
G D Birla Award:
♦ The Award is given for Scientific Research was instituted in 1991 by the K. K. Birla Foundation in honour of the Indian philanthropist Ghanshyam Das Birla. This is the 25 Th edition of the honor.

Nokia appoints Sanjay Malik as India head
i. Nokia India appointed Sanjay Malik as the head of Indian market, effective August 1, He succeeds Sandeep Girotra, who has been heading Indian market since 201. Malik joined Nokia back in 2000.
ii. Malik will lead customer operations, drive the business growth strategy and superior customer engagement services. He will be based in Gurgaon.
iii. Malik is currently Head of Network Implementation (NI) at Nokia Global Services and is credited with efficiently driving growth and delivering strong performance. i. The BCCI appointed former Spinner Anil Kumble as the new Head Coach of Indian Cricket Team. The decision was announced in the annual conclave in Dharamshala, Himachal Pradesh.
ii. His tenure would be for One year. He was among 57 candidates who applied for the position advertised by the BCCI. He has earlier mentored two IPL Sides namely Mumbai Indians and Royal challengers.
iii. Kumble was appointed Chairman of the ICC Cricket Committee in 2012, a position he still holds. He was awarded Padma Shri and also received Arjuna Award. His Cricket career spanning over 18 years.

Darjeeling zoo to receive snow leopard from London’s Dudley Zoological Gardens
i. The Padmaja Naidu Himalayan Zoological Park (PNHZP) in West Bengal’s Darjeeling will get a two-year-old male snow leopard named Makalu from Dudley Zoological Gardens (DZG) in Britain.
ii. The leopard will be brought to Darjeeling zoo for a global conservation breeding programme. Which is listed as endangered on the IUCN Red List of Threatened Species.
iii. The leopard, named Makalu who gets his name from the world’s fifth highest peak rising to 8,463 metres on the south-east side of the Everest.

Early humans in East Africa used poison-tipped bone arrows
i. Scientists discovered that bone tools were used for hunting, and even as poison arrow tips partly due to the slender and short nature of the arrow heads, in eastern Africa over 13,000 years ago.
ii. The team of researchers found bone technology such as its use as an arrow tip – was essential to a Stone Age people’s lifestyle also suggest that the technology was a central element to the Kuumbi Caves inhabitants.
iii. The researchers were from the Australian National University and Saint Louis University, studied seven bone artefacts recovered from the Kuumbi Cave, five bone projectile points, a bone awl, and a notched bone tube. 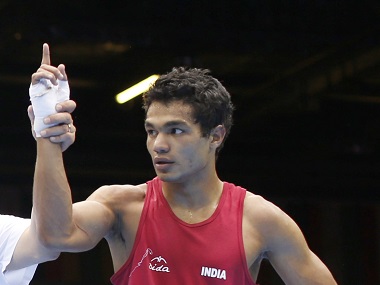 Boxing Association’s (AIBA) World Qualifying Tournament in Baku Azerbaijan.
ii. During his quarterfinal contest against Korea’s Lee Dongyun he was ruled out of the semifinal clash owing to a cut on his forehead. However the Indian won 3-0 to make the semifinal and assured himself of an Olympic quota berth.
iii. With this India will present with three Indian boxers Vikas and Manoj, Shiva Thapa (56kg) that have qualified for the Olympic Games.