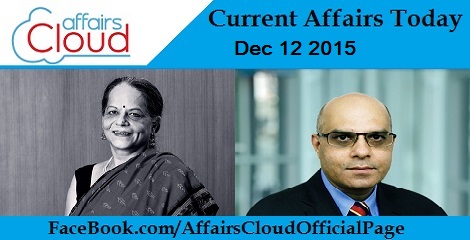 National Green Tribunal (NGT) has directed a complete ban on use of any king of plastic from Gomukh to Haridwar along Ganga with effect from February 1, 2016.

Rajiv Gandhi Scheme for Empowerment of Adolescent Girls (RGSEAG) – “Sabla” has been implemented by Govt which aims at empowering Adolescent Girls (AGs) between 11-18 years through nutrition, health care and life skills education. Nearly 100 lakh adolescent girls per annum are expected to be benefitted under the scheme.

The Centre has declared the recent floods in Tamil Nadu as a “calamity of severe nature”. Centre’s announcement came after Tamil Nadu CM J. Jayalalithaa made a plea to Prime Minister Narendra Modi seeking that the floods be declared as “National Disaster”.

India and Japan have inked a protocol for amending the existing convention for double taxation avoidance that provides for effective exchange of information in tax matters including bank accounts.

Myanmar has launched the country’s first UNESCO Biosphere Reserve Inle Lake in Shan state, opening a new chapter in its commitment to bio-diversity and eco-system conservation.

The wetland ecosystem of this freshwater lake is home to 267 species of birds, out of which 82 are wetland birds, 43 species of freshwater fishes, otters and turtles. Diverse flora and fauna species are recorded.

New Zealand has formally become a member of the Asian Infrastructure Investment Bank (AIIB) announced by Finance Minister Bill English. New Zealand’s ratification would contribute to the AIIB reaching the 50-percent threshold of the needed for the AIIB to establish operations, English said in a statement.

Karnataka delegation, which is touring France to attract companies for the forthcoming “Invest Karnataka 2016” from February 3 to 5, 2016 in Bengaluru, has signed an Expression of Interest (EoI) agreement with Reitzel Group.

French companies have invested about $4.5 billion in Foreign Direct Investment (FDI) in India since the year 2000 which makes it the 9th largest FDI contributor to India.

Union Cabinet has imposed an anti-dumping duty ranging from 5.39% to 57.39% on import of cold-rolled flat products of stainless steel for 5 years.

The highest duty has been levied on steel imports from China at 57.39%, followed by the European Union at 52.56%. Imports from Thailand have the least duty imposition of 4.58%.

India-born author Sir Ahmad Salman Rushdie (68) has been conferred with Mailer Center’s Annual Lifetime Achievement Prize that honours writers who fully exercise their freedom of creativity and thrive on dialogue and debate.

Jaipur and Varanasi has made India’s maiden entry to the Creative City Network of the United Nations Educational, Scientific and Cultural Organization (UNESCO). This year’s winner is India’s most profitable company, and its CSR performance is a shining example of the enormous positive impact on society that a corporate giant can bring when it commits to sustainable development.

Udai Kumar to take over as MD & CEO of Metropolitan SE 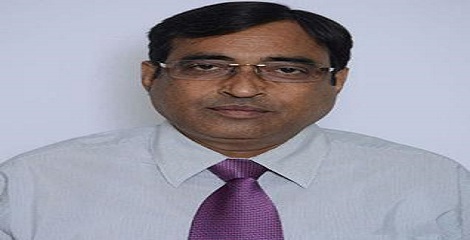 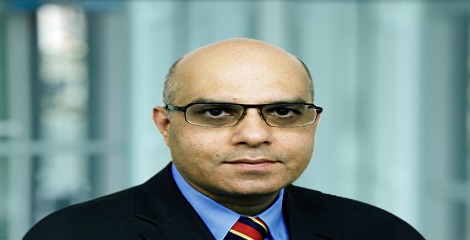 The Board of Directors of DuPont and Dow Chemical Company unanimously approved a definitive agreement to merge the two companies in an all-stock deal.

Pakistan successfully test-fired the medium-range Shaheen-III surface-to-surface ballistic missile which can carry nuclear warheads up to 2,750 km bringing many Indian cities within its range.

As per World Elite UCI (International Cycling Union) ranking released by UCI, the 20 year old Deborah Herold, from Andaman and Nicobar moved up to 4th spot in the world rankings from earlier 10th rank. The English and Marathi version of a book “Life on My Terms –From the Grassroots to the Corridors of Power” authored by Sharad Pawar released on the 75th birthday of Pawar, the Maratha strongman and the leader of Nationalist Congress Party (NCP) at Vigyan Bhavan in New Delhi.

The President of India, Shri Pranab Mukherjee received first copies of the books ‘Selected Speeches of the President’ Volume  3 and ‘Presidential Retreats’ at a function held at Rashtrapati Bhavan from the PM Shri Narendra Modi.

About “Selected Speeches of the President – Volume 3” :

About “The Presidential Retreats of India” :