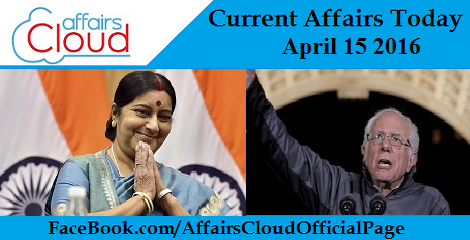 Delhi government has banned the production, storage, distribution and sale of pan masala, gutkha, and all forms of chewable tobacco in the national capital, for one year. 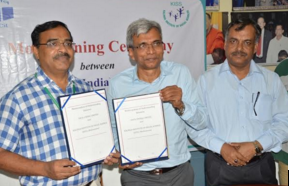 Keralities are celebrating the Harvest Festival, Vishu. Believers across the state are visiting temples, performing special pujas and exchanging gifts to mark the occasion.

India, US to collaborate on tackling offshore tax evasion

India and the US have agreed to enhance collaboration on tackling offshore tax evasion and increase cooperation in sharing of cross-border tax information.

Search Engine Google’s free WiFi service now extended to 10 railway stations as a part of its tie up with Railtel. The formal launch will be started in Bhubaneswar.

The new Innocenti Report Card Fairness for Children looks at differences between children at the bottom of the inequality ladder, and their peers in the middle, across 41 advanced economies.

Pakistan and China began their 5th  joint air exercise, Shaheen-V in Pakistan.Three different types of frontline fighter aircraft belonging to various PAF squadrons for the first time in the Shaheen-V

India gets a loan from the BRICS’s China based New Development Bank (NDB) which gave a $250 million funding to Canara Bank for a renewable energy project.

RBI has reduced the minimum tenure of Masala bonds to make it more attractive. The term ”Masala Bond” is used to refer to rupee-denominated borrowings by Indian entities in overseas markets.

The government has imposed an anti-dumping duty of up to USD 149 on imports of N-Butyl Alcohol from European Union, Malaysia, Singapore, South Africa and the US for five years

Union government has ranked its ministers on the basis of how quickly and efficiently they respond to people’s requests on Twitter. The Foreign Minister of India Sushma Swaraj has topped these rankings.

American Democratic presidential candidate Bernie Sanders won the TIME 100 reader poll with 3 percent of the vote, ahead of Hilary Clinton who was 25th with 1 per cent of the vote.TIME’s editors ultimately choose the TIME 100, which will be announced on April 21. 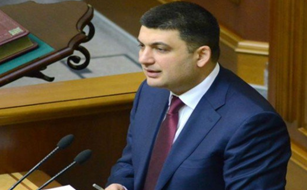 Susmita Pande, a professor at Ujjain’s Vikram University, has been appointed as the new chairperson of the National Monument Authority (NMA) for a three-year term.

Indian Paddlers Soumyajit Ghosh and ManikaBatra booked their Olympic tickets by winning their respective groups in the Asian Qualifiers in Hong Kong.

Co-founder of Hero Cycles group Satyanand Munjal, died at the age of 99 in Model Town, Ludhiana.

Hero Honda started in 1984 as a joint venture between Hero Cycles of India and Honda of Japan by Dr. Brijmohan Lall Munjal