Centre releases new political map after official formation of the UT of J&K, and Ladakh
On November 2, 2019, A day after the bifurcation of the state Jammu and Kashmir (J&K) into two Union territories (UT) – Jammu and Kashmir (J&K) and Ladakh, the Union Home minister Amit Shah has released a new political map of India showing 28 states and 9 Union territories. He also separately released a map showing the administrative boundaries of the Union territories of J&K and Ladakh. The map has been redrawn by Survey of India, Department of Science & Technology. 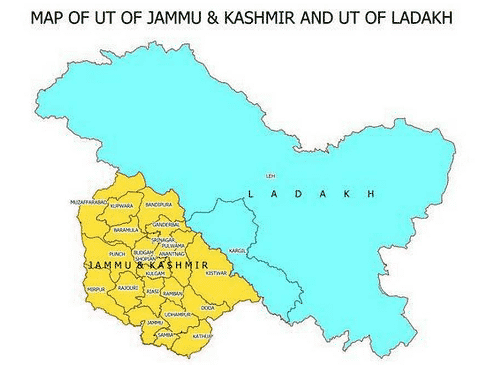 Key Points:
i.The new UT of Ladakh consists of 2 districts of Kargil and Leh & areas such as Gilgit, Gilgit Wazarat, Chilhas and the Tribal Territory of 1947 that have been occupied by Pakistan are included in the Ladakh UT. The Leh district has been defined in the Jammu and Kashmir Reorganization (Removal of Difficulties) Second Order, 2019.
ii.The rest of the former State of Jammu and Kashmir such as Kupwara, Baramulla, Bandipur, Ganderbal, Srinagar, Pulwama, Poonch, Budgam ,Shopian, Anantnag, Kulgam, Kishtwar, Rajouri, Reasi, Ramban, Doda, Jammu, Udhampur, Samba, Kathua & other areas in Pakistan occupied Kashmir (PoK) such as Mirpur and Muzaffarabad have been included in the new UT of J&K.
iii.On August 5, 2019, the centre revoked the provisions of Article 370 of the constitution that gave special status to J&K and bifurcated the state into two Union territories.
iv.On November 1, 2019, Indian Administrative Service (IAS) officer Girish Chandra Murmu took oath as the 1st lieutenant governor of the new Union Territory of Jammu and Kashmir & Radha Krishna Mathur was sworn in as the 1st Lieutenant Governor of the Union Territory of Ladakh.

7th India-US economic and financial partnership dialogue 2019 held in New Delhi
On November 1, 2019,In order to deepen the economic partnership, the 7th meeting of India-US (United States) Economic and Financial partnership (EFP) dialogue 2019 between the Ministry of Finance of the Republic of India and the Department of the Treasury, United States of America (USA) was held in New Delhi. The Indian side was led by Smt. Nirmala Sitharaman, Minister of Finance, Government of India (GoI) & the U.S. delegation was led by Mr. Steven Mnuchin, U.S. Secretary of the Treasury.

i.The meet focused on a range of issues such as the global, US, and Indian economic outlooks, global debt sustainability, financial sector reforms.
ii.Both the nations have agreed to enhance cooperation in tackling money laundering and combating the financing of terrorism…..Click Here To Read More 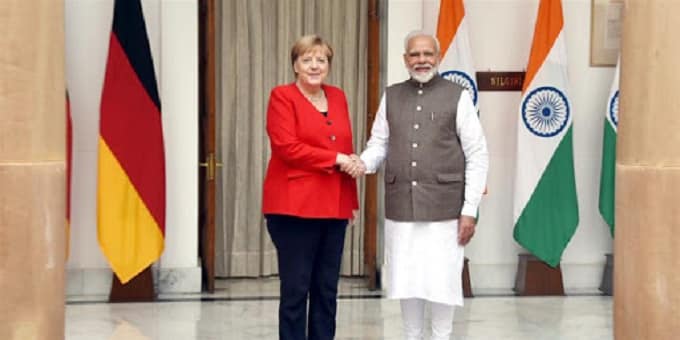 The Chancellor of the Federal Republic of Germany Dr. Angela Merkel paid a 2-day official visit to India from October 31-November 1, 2019 at the invitation of Prime Minister(PM) Shri Narendra Modi, with the aim of boosting strategic ties with the country including key areas such as defence and security.

Tripura Gramin Bank associated with Stock holdings corporation launches e-stamp counter in Agartala
On November 1, 2019, Tripura Gramin Bank in association with the Stock Holdings Corporation of India Limited (SHCIL) started an e-stamp counter at the bank’s Abhyanagar branch in Agartala. The bank is sponsored by United Bank of India (UBI) & is jointly owned by the Government of India, Government of Tripura and UBI.
Key Points:
i.Customers will have to pay 10 rupees for purchasing e-stamps ranging from 10 rupees to 1,000 rupees and 20 rupees for purchasing e-stamps of more than 1,001 rupees.
ii.With the availability of this e-stamp facility in banks, 100% of the stamp duty revenue will be moved to the government fund, which will increase the government revenue.
About Tripura:
Capital: Agartala
Governor: Ramesh Bais
Chief minister: Biplab Kumar Deb
National Parks: Clouded Leopard National Park ,Rajbari National Park.

Siemens signed MoU with NTPC, TERI for decarbonization
On November 1, 2019, German multinational conglomerate company Siemens signed Memoranda of Understandings(MoU) with power producer NTPC (formerly National Thermal Power Corporation Limited) and The Energy and Resources Institute(TERI) for decarbonisation.
MoU with NTPC: The MoU was signed for reducing the industrial and commercial carbon footprint and also to reduce the dependence on hydrocarbon in India.
MoU with TERI: The MoU with Teri was to enable energy transitions across the electricity, transport and industrial sectors. A separate MoU was also signed for collaboration in technology-oriented areas to support India’s energy transition including sector coupling (idea of interconnecting the energy-consuming sectors).
About TERI:
Founded- 1974.
Headquarters- New Delhi.
Director- Ajay Mathur.
About NTPC:
Founded- 1975.
Headquarters- New Delhi.
Chairman and Managing Director(MD)- Gurdeep Singh.
Act- NTPC is corporated under the Companies Act 1956. 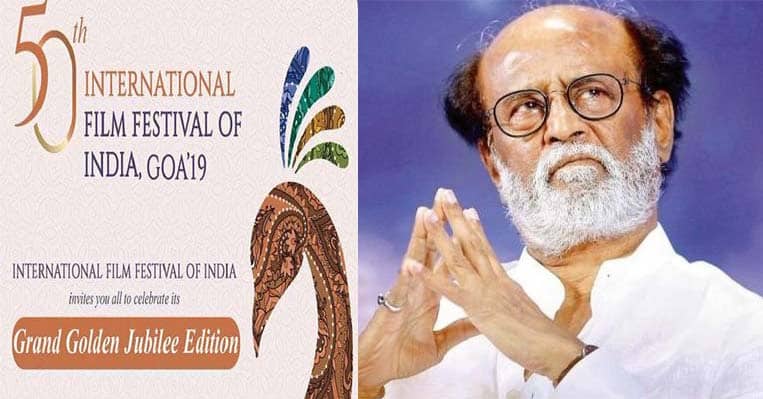 Key points:
i.French actor Isabelle Anne Madeleine Huppert will be honoured with “Life Time Achievement Award” for a ‘foreign artiste’ in the International Film Festival of India(IFFI) 2019.
About IFFI 2019(Golden Jubilee):
i.Russia will be the partner country of the IFFI 2019.
ii.The 50th IFFI,2019 will screen 50 films by 50 female filmmakers to acknowledge the contribution of women in cinema & will also witness over 200 best films from 76 countries, 26 feature films and 15 non-feature films in Indian panorama section.

Sudarsan Pattnaik picked for Italian Golden Sand Art Award 2019
International acclaimed Sand Artist Sudarsan Pattnaik who belongs to Odisha has been selected for the prestigious Italian Golden Sand Art Award 2019. He will be felicitated during the International Scorrana Sand Nativity festival in Italy which is to be held from November 13 to 18, 2019. i.Odisha chief minister Naveen Patnaik congratulated the Sand Artist for his achievement.
ii.He has received a letter from the President of ‘Promuovi Scorrona’ Vito Maraschino informing him about his selection for the award. Mr.Pattnaik was honoured by the union government with the fourth highest civilian ‘Padma Shri’ award in 2014.

Labour ministry launched 3 Apps: UAN Registration, E-Inspection and DIGI Locker at 67th EPFO foundation day in New Delhi
On November 2, 2019 the Minister of State (MoS-independent charge) for Labour and Employment, Shri Santosh Kumar Gangwar launched 3 apps during the 67th foundation day of Employees’ Provident Fund Organization (EPFO) in New Delhi. The 3 apps are UAN Registration, E-Inspection and DIGI Locker. These apps were developed by EPFO for enhancing ease of doing business and also to promote transparency in EPFO. A booklet commemorating the journey of EPFO from 1952 to 2019 was also released.

South Africa clinches its 3rd Rugby world cup title 2019 by defeating England
On November 2, 2019, South Africa defeated England’s team by 32-12 scores in the final of the 9th edition of Rugby World Cup 2019 held at International Stadium, Yokohama, Japan. The winners are awarded the Webb Ellis Cup, named after William Webb Ellis, the Rugby School pupil who invented rugby by picking up the ball during a football game. 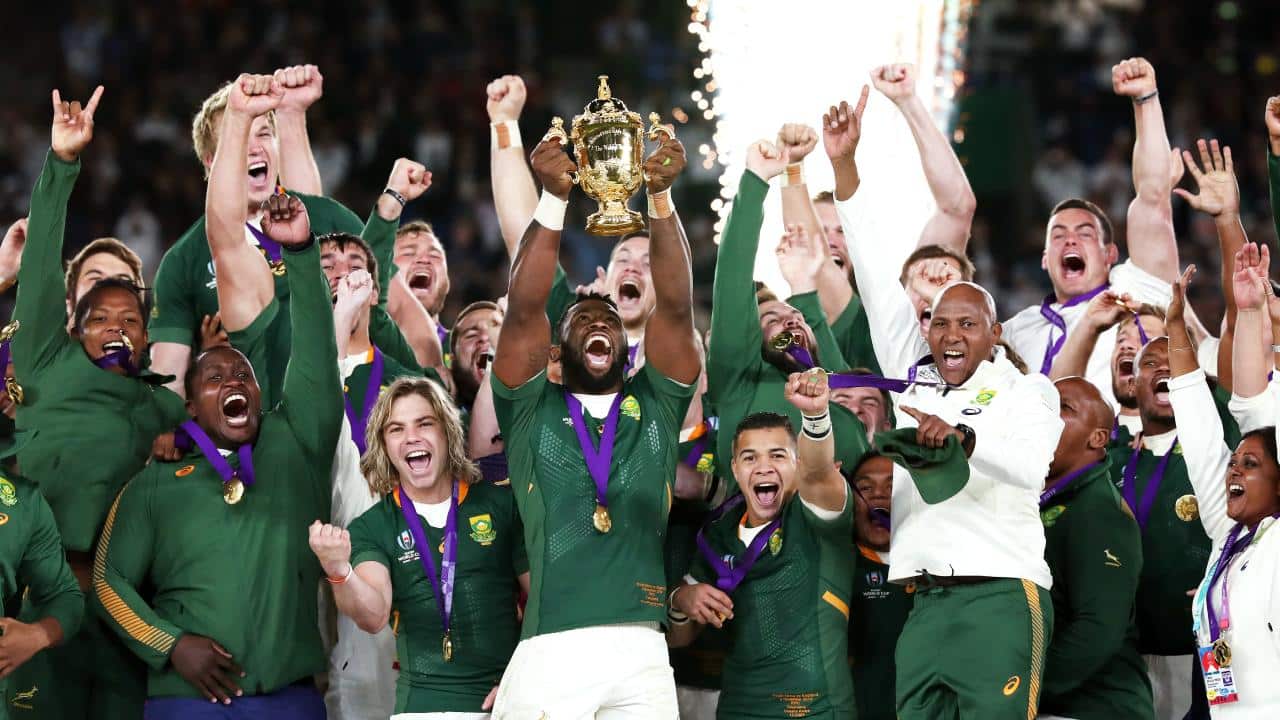 Key Points:
i.The SA team, which won the World Cup for the first time in 1995, also won the final in 2007. With this, this team, known as Springbok, also equalled New Zealand’s record of winning the World Cup three times.
ii.The tournament is administered by World Rugby, the sport’s international governing body.
iii.This was the 3rd time the South African(SA) team reached the final of the World Cup and won the tournament.
Rugby:
It is a contact team sport which originated in England in the first half of the 19th century. One of the two codes of rugby football, it is based on running with the ball in hand. 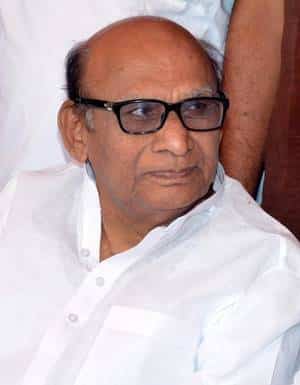 i.He was a Popular Social Leader who fought for the Special Status for Kalyana Karnataka (Hyderabad Karnataka) region under Article 371(J).
ii.He was 81 year old and suffering from prolonged illness. 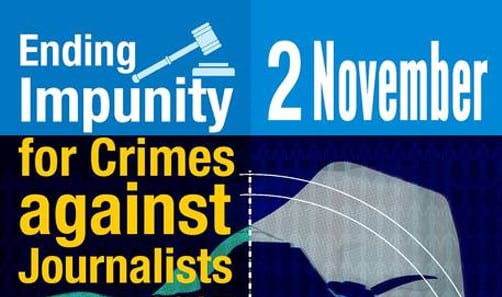 Writer Anand from Kerala bags 27th Ezhuthachan Puraskaram 2019
On November 1, 2019, Kerala’s eminent writer Anand has been selected for the 27th Ezhuthachan Puraskaram 2019. Kerala’s Minister of Culture A.K.Balan has announced this highest literary honour Award which is given by Kerala Sahitya Akademi Award and the Government of Kerala. The award comprises a cash prize of Rs 5 lakh and a citation. 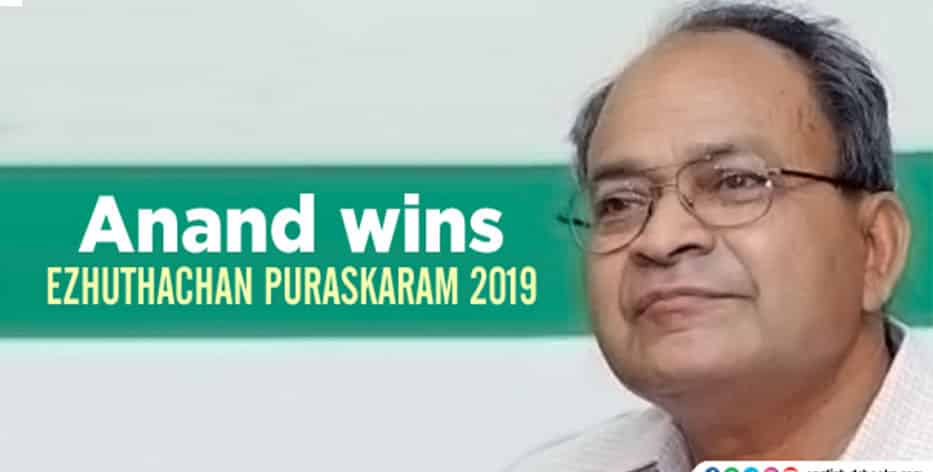 i.Anand was chosen for his overall contributions to Malayalam language and Literature.His real name is P.Satchidanandan uses the pseudonym Anand.
ii.He retired as Planning director from the Central Water Commission in New delhi. His native is Iringalakkuda,Thrissur at Kerala. His first novel was Alkkoottam. He is also a recipient of Vayalar Award and Yashpal Award.

Singer S.P.Balasubrahmanyam of Andhra Pradesh Felicitated for Chetana Award 2019
On Nov 1, 2019, Legendary singer Sripathi Panditaradhyula Balasubrahmanyam from Nellore, Andra Pradesh, has been selected for the Chetana Silver Jubilee National Award 2019.  The award carries a cash prize of Rs one lakh and a citation. On the other hand, Oscar-winning sound engineer Resul Pookutty won the national audio excellence award, instituted in memory of Fr. Paul Alengattukaran, the founder of the Chetana Sound Studio. 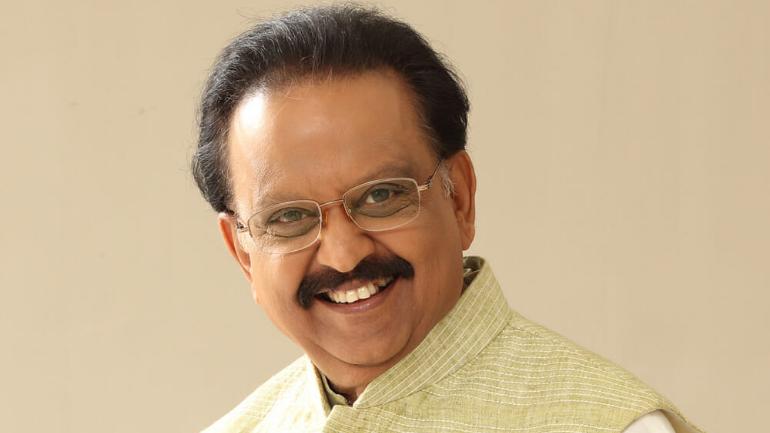 Punjab Cabinet gave nod to change Section-2 of Punjab State Legislature (Prevention of Disqualification) Act,1952
On Nov 1, 2019, The Punjab Cabinet has decided to change the Punjab State Legislature (Prevention of Disqualification) Act,1952 (had been enacted in terms of Article 191 of the Constitution of India) to declare that the holders of certain offices of profit and the members of the assembly has appointed under this category will not be disqualified of the State Legislature.
i.The bill amending Section 2 of the act will be presented in the forthcoming session of the Punjab Assembly.
ii.In another decision, the Cabinet also approved the presentation of the Punjab State Commission for Scheduled Castes (Amendment) Ordinance 2019 in the ensuing session of Punjab Vidhan Sabha for enactment. The enactment would pave the way to enhance the age limit from existing 70 years to 72 years for appointment as Chairperson of the Commission.
About Guru Nanak Dev Award:
The Punjab State Cabinet passed a complete resolution to Institute of ‘Sri Guru Nanak Dev Ji Award’ for Promotion of Peace and Interfaith understanding,in commemoration of the 550th Prakash Purb of Sri Guru Nanak Dev Ji.This award carries a cash price of 11 Lakh rupees and a Citation.