We are here for you to provide the important Recent and Latest Current Affairs 4 December 2020, which have unique updates of Latest Current Affairs 2020 events from all newspapers such as The Hindu, The Economic Times, PIB, Times of India, PTI, Indian Express, Business Standard and all Government official websites. 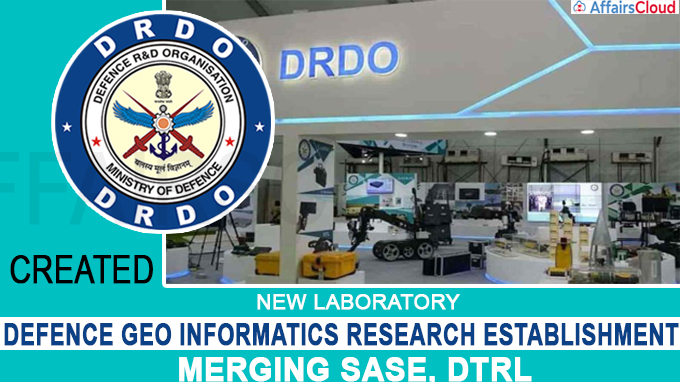 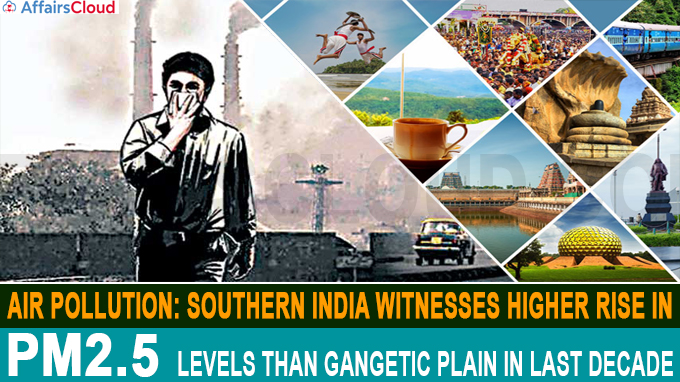 According to a survey conducted by CPCB-IITD (Central Pollution Control Board-Indian Institute of Technology, Delhi), Southern India & Eastern India recorded a higher rate of increase in pollution levels than the Indo-Gangetic Plain (IGP). The study was conducted based on Satellite Data from 2000-2019, which is the First-of-its Kind survey to look at air pollution spatially.
i.They survey has also found that Air Pollution in Rural India has increased at par with Urban India.
ii.The states of Kerala (Urban 24.2%, Rural 21.9%), Goa (Urban 36.4%, Rural 37.3%), Andhra Pradesh (Urban 20.15, Rural 18.9%) recorded the highest levels of pollution during the period.
CPCB-IITD Survey:
i.The study has been commissioned by the Central Pollution Control Board (CPCB).
ii.The author of the study is Professor Sagnik Dey of IIT, Delhi.
States with Highest Levels of Pollution (2000-19): 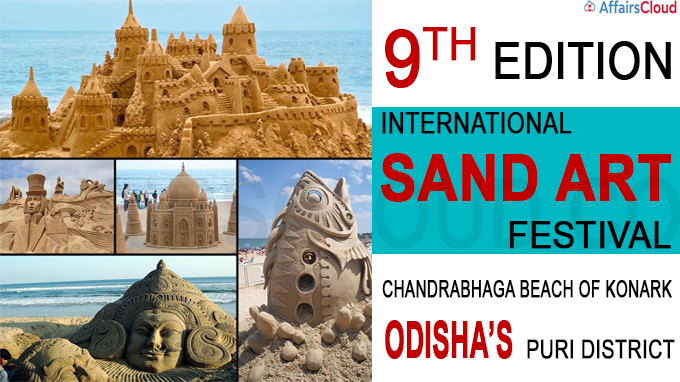 On December 2, 2020, The 7th India-Suriname Joint Commission Meeting (JCM) was held virtually. The meeting was Co-Chaired by the Minister of State for External Affairs, V. Muraleedharan & Albert R. Ramdin, Minister of Foreign Affairs, International Business and International Cooperation of the Republic of Suriname.
i.The next JCM Meeting is set to be held at Paramaribo, Capital of Suriname in 2022 on a date to be decided by both countries.
ii.They also agreed to enhance cooperation for the establishment of creative industries, Health, Traditional System of Medicine, Agriculture, Mining, Energy, Defense, Culture & Education, Consular Cooperation and Development Partnership.
iii.The Two Ministers emphasized the importance of undertaking developmental projects under concessional conditions (including Lines of Credits) to improve the spirit of South-South Cooperation.
About Ministry of External Affairs (MEA):
Union Minister – Dr. Subrahmanyam Jaishankar
Minister of State – V. Muraleedharan
About Suriname:
President – Chan Santokhi
Capital – Paramaribo
Currency – Surinamese Dollar (SRD)
<<Read Full News>> ii.Creating a robust infrastructure for the development of volunteerism for donating blood and plasma to Covid-19 patients.
iii. In his address, the minister highlighted the contribution of Youth across the globe in fighting the Covid-19 Pandemic.
About BRICS youth summit:
Aim- To engage youth in economic, political, humanitarian, information, scientific and Technological cooperation amongst the BRICS countries.
Started in 2015 in Russia.
In the 6th BRICS youth summit under the chairmanship of Russia in 2020, the BRICS International School and the contest for BRICS young leaders are merged to identify most promising research projects.
India to host BRICS Games in 2021
On the occasion of India’s annual sports competitions along with the Khelo India Games, BRICS member countries will be invited to showcase their traditional indigenous games in the inaugural or closing ceremony of Khelo India 2021, at Panchkula, Haryana.
About BRICS: 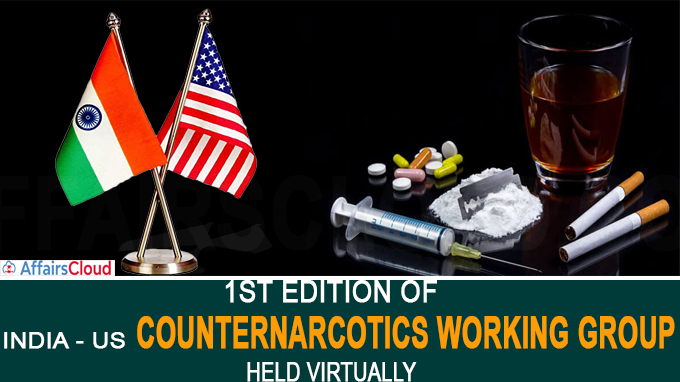 Key Discussions:
–Discussions were held on increasing collaboration on counternarcotics regulation and law enforcement and also identified areas of joint action for the same.
–Both sides committed to strengthening their cooperation in curtailing the illegal production, manufacturing, trafficking, and distribution of pharmaceutical and illicit drugs, as well as the precursor chemicals used to manufacture them.
–They also discussed strengthening India’s regional leadership role in building capacity for counternarcotics initiatives in South Asia.
About Narcotics Control Board (NCB):
Director General– Rakesh Asthana
Headquarter– New Delhi

NPCI Allowed Payment Banks and Fintechs in its Shareholding upto 0.44% i.The National Payments Corporation of India (NPCI) has completed private placement of 4.63% of its equity shares worth Rs 81.64 crores.  This placement has enabled small finance and payment banks, as well as fintechs to be its shareholders up to 0.44%.
ii.With this placement, now the total shareholder entities for NPCI stand at 67.
About National Payment Corporation of India (NPCI):
It is a not-for-profit organisation, and an initiative of the RBI and Indian Banks’ Association (IBA). 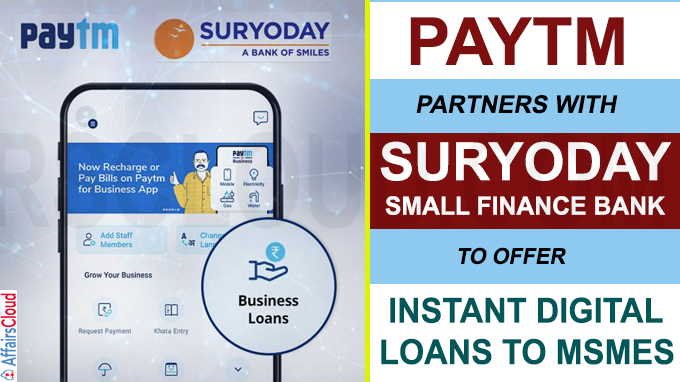 i.On December 2, 2020 Paytm partnered with Suryoday Small Finance Bank(SFB) Ltd to offer collateral-free instant digital loans to MSMEs(Micro, Small & Medium Enterprises). This will empower the MSMEs.
ii.This is the 1st lending partnership for Paytm with a small finance bank to help merchants to avail loans seamlessly.
iii.Aim of the Partnership 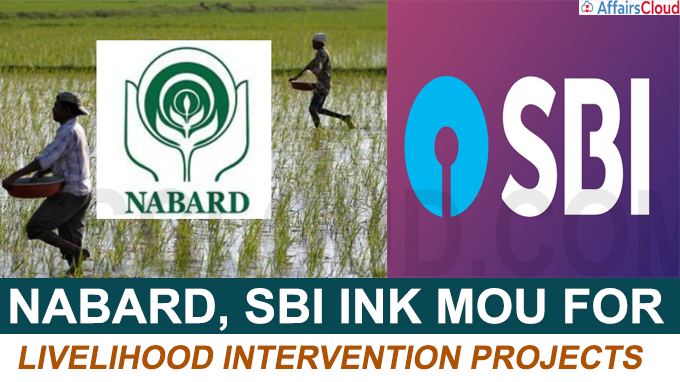 About National Bank for Agriculture and Rural Development (NABARD):
Came into existence-12 July 1982
Chairman– Dr. Govinda Rajulu(G.R.) Chintala
Headquarters– Mumbai, Maharashtra
About SBI(State Bank of India):
Founded– July 1, 1955 as SBI
Headquarters– Mumbai, Maharashtra
Chairman–  Dinesh Kumar Khara(Succeeds Rajnish Kumar)
Tagline– The banker to every Indian; With you all the way; Purely banking nothing else; The nation banks on us; A bank of the common man
<<Read Full News>> 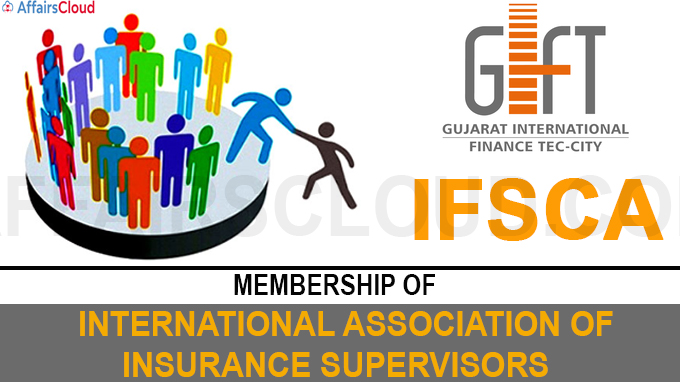 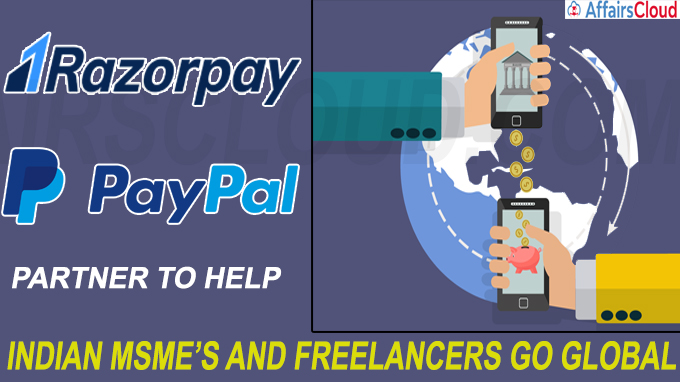 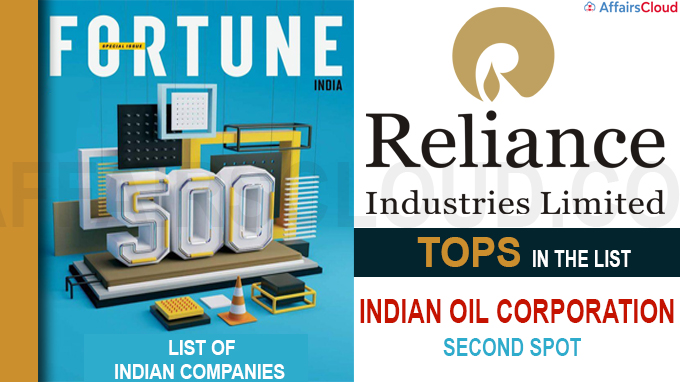 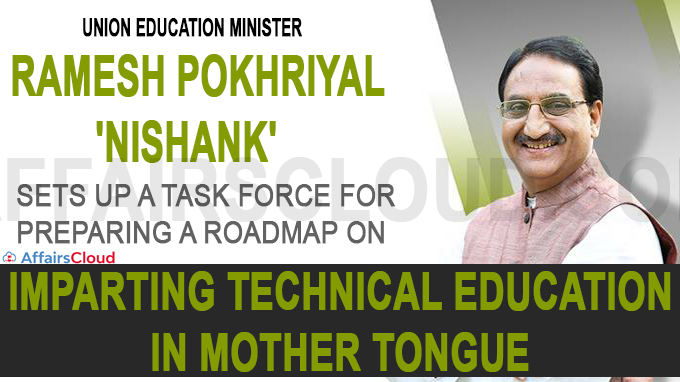 Srinagar born Wushu coach and the first Dronacharya Awardee from the Union Territory of Jammu and Kashmir, Kuldeep Handoo is appointed as the Ambassador of Fit India movement.

About Kuldeep Handoo:
i.Kuldeep Handoo born in Srinagar, is the first recipient form the Union Territory of Jammu and Kashmir to receive Dronacharya Award
ii.A former Wushu Athlete who won 11 gold medals in National and 6 in International stage, is the Wushu coach of Team India.
iii.Under his guidance Athletes have won two gold medals at the world championship and one at the World Cup.
iv.He also serves as Inspector of police in Jammu and Kashmir.
v.Kuldeep Handoo received other awards such as Jammu and Kashmir Police medal award, for meritorious service, The Parshuram Award, an honour of sports in the state of Himachal Pradesh

Fit India movement:
Prime Minister Narendra Modi launched Fit India movement in August 2019 in New Delhi, to encourage Indians to include fitness activities and sports in their daily lives to pave the way for a healthy and fit lifestyle. 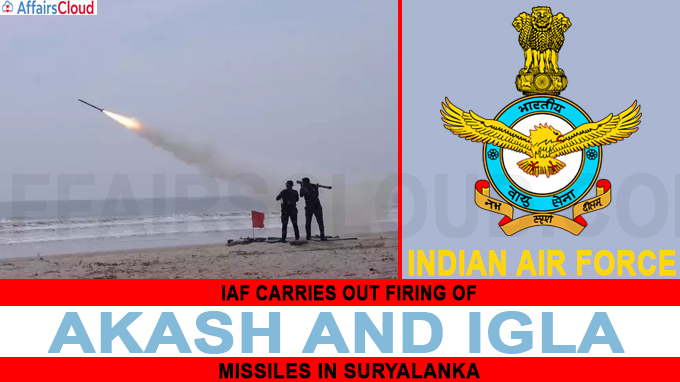 Under the SPARC project of Ministry of Education, IIT Kanpur researchers develop a ‘Dambaru’ or ‘Damaru’ inspired lattice, which shows tremendous application in vibration isolation in high speed trains, Stealth submarines and Helicopters rotors.
About “damaru”shaped lattice:
i.The hour-glass shaped meta-structure provides superior absorption of electromagnetic and sonic waves.
ii.Theoretically, this absorption could provide “invisibility” of an object either in optical or in acoustic domain.
iii.Existing lattice and crystal based phononic materials have however, practical limitations in terms of customizability and hence, they can be generally used in a narrow band of frequency.
iv.Stiffness of a vibrating medium is altered drastically by controlling the microstructure from regular honeycomb structure of the lattice to auxtetic honeycomb structure.
v.This control provides space for development of new ultrasonic devices with subwavelength imaging capacity, useful for the health industry.
About SPARC project:
i.The Scheme for Promotion of Academic and Research Collaboration (SPARC) promotes research ecosystem of India’s Higher Educational Institutions by facilitating collaboration between Indian Institutions and World’s best institutions.
ii.The Ministry of Education provides funds for infrastructure development and as scholarship to the research fellows.

The Australian Cricket Team won the 3-match Dettol ODI series 2020 against India by 2-1. The ODI series is part of India’s Tour of Australia, 2020-21 consisting of 3 ODIs, 3 Twenty20 Internationals (T20I), 4 Test Matches to be played from November 2020 – January 2021.
i.Australian Batsman Steve Smith was chosen as the Player of the Series for scoring 216 runs in the series which included 2 Centuries.
ii.During the series Virat Kohli became the Fastest Batsman to reach 12, 000 runs in ODIs (242 innings) & 22, 000 International runs (462 International innings).
iii.The ODI Series is the first for India in the 2020-22 ICC (International Cricket Council) Cricket World Cup Super League. The top 7 teams on the points table of ICC super league will qualify directly for the 2023 ODI World Cup set to be held in India.
About Board of Control for Cricket in India (BCCI):
President – Sourav Ganguly
Headquarters – Mumbai, Maharashtra
<<Read Full News>> On 2nd December, 2020 the 15th Prime Minister (PM) of Pakistan Zafarullah khan Jamali passed away at the age of 76 in Armed Forces Institute of Cardiology & National Institute of Heart Diseases (AFIC-NIHD), a military hospital in Rawalpindi, Pakistan.
Jamali’s Career:
i.Born on 1st January 1944, at an impoverished province of Balochistan.
ii.Started his political career in 1964, and got elected to the Provincial Assembly in 1977.
iii.Holded various ministerial posts for brief durations.
iv.Got appointed as the Chief Minister of Balochistan in 1988 and again in 1996.
v.Elected as the 15th Prime Minister of Pakistan under the Candidature of Pakistan Muslim League (PML).
vi.He was elected as the Member of Parliament for the last time in 2013.
As the 15th PM of Pakistan: 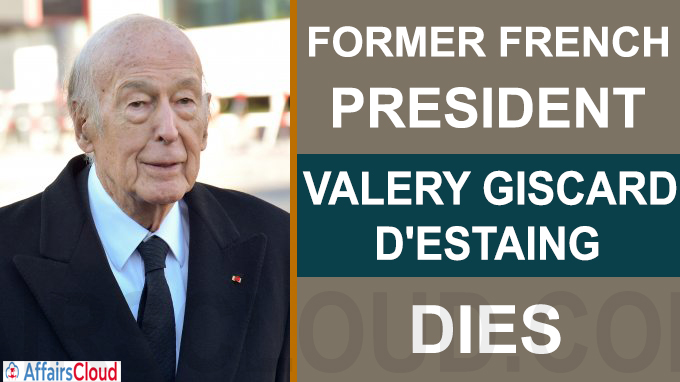 On 2nd December 2020, Valéry Giscard d’Estaing the former President of France who served from 1974 to 1981 passed away at the age of 94 at his residence in Loir-et-Cher region, in central France. He passed away due to COVID-19 complications. He was born on 2nd February 1926 in Koblenz, French-occupied Germany (now Germany).
About Valéry Giscard d’Estaing:
i.Valéry Giscard d’Estaing served as the finance minister under the presidency of Charles de Gaulle.
ii.He became the president of France in 1974 at the age 48, he was one of the youngest Presidents of France.
iii.He founded the Union for French Democracy, a centre-right political party in 1978 to counter the Gaullist preponderance over the political right in France.
iv.Contesting against Socialist Francois Mitterrand he lost re-election in 1981.
Reforms:
i.He lowered the voting age from 21 to 18 and he also liberalised the laws on divorce, abortion and contraception during his tenure as the President.
ii.He also supported the laws on equal pay and opportunities for women and reduced the retirement age to 60.
iii.He opposed the death penalty and the last death sentence using the guillotine in France took place in 1977.
iv.He worked on the European constitution and presented it in 2004, which was rejected by the French and Dutch voters and later led to the adoption of the treaty on European Union in 2007. International Day for the Abolition of Slavery 2020 – December 2 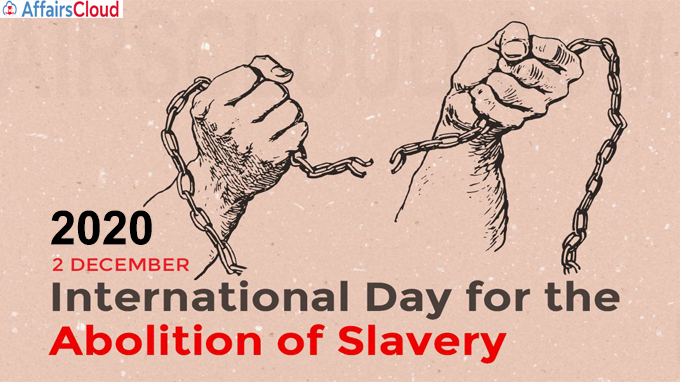 i.The United Nations(UN)’s International Day for the Abolition of Slavery is annually celebrated across the globe on 2nd December with an aim to eradicate the modern form of slavery like human trafficking, sexual exploitation, child labour, forced marriage and forced recruitment of children for armed conflicts.
ii.2nd December marks the date, 2nd December 1949, on which the United Nations General Assembly(UNGA) adopted the resolution A/RES/317(IV) – United Nations Convention for the Suppression of the Traffic in Person and of the exploitation of the Prostitution of other.
iii.ILO’s “50 for Freedom campaign” aims to persuade at least 50 countries to ratify the protocol on Forced Labour by the end of 2019. So far 47 countries have ratified the ILO’s Protocol on Forced Labour.
About International Labour Organisation (ILO):
Director General(DG)– Guy Ryder.
Headquarters– Geneva, Switzerland.
<<Read Full News>> On 1st December 2020, Prominent Shia cleric and Islamic scholar Maulana Kalbe Sadiq passed away at the age of 83 in Lucknow, Uttar Pradesh. He was born on 22nd June 1939 in Lucknow, Uttar Pradesh, India. He was an educationist, philanthropist, who served as the senior vice president of All India Muslim Personal Law Board (AIMPLB). He was described as India’s “second Sir Syed Ahmad Khan”.

HDFC Life in association with Ketto India has initiated ‘PromisewalaDabba’, a nationwide crowdfunding campaign. This is to support the Dabbawalas of Mumbai, who have been affected due to the COVID-19 pandemic and the lockdown. As part of the campaign, a PromisewalaDabba will be delivered that includes essential supplies such as staple food ingredients, spices and accompaniments, sanitizers and toiletries to their homes.

Indian Navy’s Indigenous Aircraft Carrier (IAC) will be commissioned by the end of 2021 or by early 2022. The IAC had undergone Basin Trials at the Cochin Shipyard Limited (CGL) on November 30, 2020. The Sea Trials of the IAC would be undertaken in the first half of 2021 after which it will be inducted into the Indian Navy as Indian Naval Ship (INS) Vikrant.