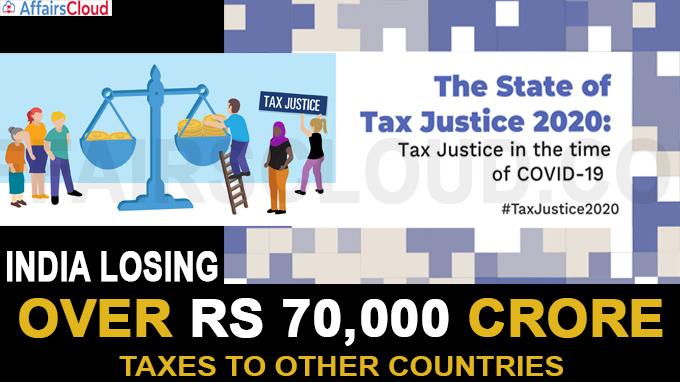 The findings of the report are based upon the data that was self-reported by MNCs to tax authorities under the Base Erosion and Profit Shifting (BEPS) project led by the Organisation for Economic Co-operation and Development (OECD).

–The report projected India’s Gross Domestic Project (GDP) at $2.51 trillion (based on the average of the past ten years), based on this India’s tax loss is placed at 0.41% of its GDP.

–India’s most vulnerable channel for annual tax loss is taxes lost to other countries i.e. outward foreign direct investments (OFDI) with a 66% vulnerability score. The trading partners of India which contribute most to this factor are Mauritius (23.6%), Singapore (17.2%), and the Netherlands (11.2%).

–India’s estimated tax revenue losses due to offshore financial wealth of $202.2 million. Its offshore wealth is 0.4% of GDP.

–The global tax loss is equivalent to 34 million nurses’ yearly salaries lost every year, or one nurse’s yearly salary every second.

—Higher income countries are responsible for 98% of global tax losses borne by countries which aggregate to over $ 419 billion each year.

—Lower income countries are responsible for just 2% of the global losses, which results in annual tax loss of over $8 billion.

–Private tax evaders are responsible for shifting their financial assets of $10 trillion offshore.

–OECD countries are also responsible for over 59% of the $182 billion the world loses to private offshore tax evasion annually.

–It suggested that governments should introduce an excess profit tax on MNCs such as global digital companies, who are making excess profits during the pandemic. These profits should be identified at the global level and not at the national level.

–Formulation of the United Nations (UN) tax convention to set multilateral standards for corporate taxation and to ensure tax co-operation between governments.

The TJN also ranked countries on the basis of two biennial indexes viz. Corporate Tax Haven Index 2019 and Financial Secrecy Index 2020. These 2 indexes are also released by TJN.These are explained as below:

The CTHI 2019 ranked 64 countries on the basis of 20 indicators based on how intensely the country’s tax and financial systems serve as a tool for corporations to extract wealth from around the world and hide it in the country for the purposes of underpaying tax elsewhere in the world.

The FSI 2020 ranked 133 countries on the basis of 20 indicators on how intensely the country’s tax and financial systems serve as a tool for individuals to hide their finances from the rule of law, including other countries’ laws.  It was the 6th edition of FSI.

i.For the first time a report on stillbirths titled “A Neglected Tragedy: The Global Burden of Stillbirths” has been released by UN Inter-Agency Group for Child Mortality Estimation (UN-IGME) which was co-created by United Nations Children’s Fund (UNICEF), World Health Organisation (WHO), World Bank and the United Nations (UN) Department of Economic and Social Affairs, Population Division.

ii.The United Nations Office for Disaster Risk Reduction(UNDRR) published the report titled “The human cost of disasters: an overview of the last 20 years (2000-2019)” which states that climate change is the major cause for the doubling of natural disaster in the past 20 years (2000- 2019).