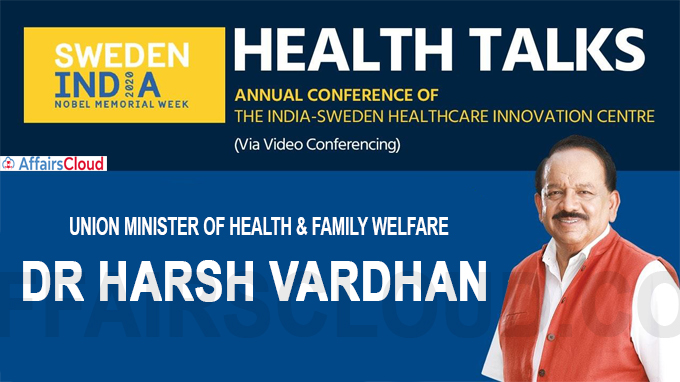 The Sweden India Nobel Memorial Week was instituted in the memory of Swedish inventor and philanthropist Alfred Nobel and celebrates his biggest contributions viz. innovations, entrepreneurship and creativity.

–An event, titled “SHE STEM: Women Leading the Way”, is being organised in partnership with the Atal Innovation Mission (AIM). It focuses on the importance of encouraging girls and young women to study science.

–The Sweden India Nobel Memorial Quiz (SINMQ) 2020 will also be organized by the Embassy of Sweden and the Consulate General of Sweden in Mumbai, Maharashtra. The winner will get Rs 1 Lakh along with a diploma.

–There will be a CEO Forum – a virtual interaction between Swedish Trade Minister Anna Hallberg and the 200 plus Swedish companies where the Minister would give her outlook on the global trade and investment scenario amid COVID-19.

Announcement of Winners of 1st Innovation Challenge of the Centre

The India-Sweden Healthcare Innovation Centre announced the 14 winning healthtech solutions which are aimed at improving the healthcare ecosystem in the country under Innovation Challenge.

The winning start-ups will now work with the India-Sweden Healthcare Innovation Centre platform which will provide them access to cross-country mentorship, guidance on funding among others.

ii.On the lines of doubling the income of farmers by 2022, the first ever virtual “CII Agro & Food Tech: India – International Food & Agri Week” was organized from October 16-22, 2020 which was virtually inaugurated by Union Minister Narendra Singh Tomar, Ministry of Agriculture and Farmers Welfare (MoAFW) during the 14th edition of the Agro and Food Tech.