We are here for you to provide the important Recent and Latest Current Affairs 15 December 2020, which have unique updates of Latest Current Affairs 2020 events from all newspapers such as The Hindu, The Economic Times, PIB, Times of India, PTI, Indian Express, Business Standard and all Government official websites. i.On December 9, 2020 CII signed a MoU with Amazon India(amazon.in) to enable benefits of Electronic(e)-commerce to Micro Small and Medium Enterprises (MSMEs) in 10 states across India at the 17th CII Global SME Business Summit 2020 organized by CII in partnership with the Ministry of MSME, Government of India under the theme: Reboot to Rebound: Stimulating Demand & Supply Side, This will boost MSMEs in domestic & international trade.
ii.CII and Amazon India aims to bring a digital transformation for MSMEs for these states, through this partnership
iii.Amazon India and CII will work together with MSME Ministry to help lakhs of MSMEs in these states to leverage technology to reach customers in India and globally  through the adoption of e-commerce.
About Confederation of Indian Industry(CII):
President– Uday Kotak(Managing Director & CEO, Kotak Mahindra Bank Limited)
Director General– Chandrajit Banerjee
Headquarters– New Delhi, India
<<Read Full News>> 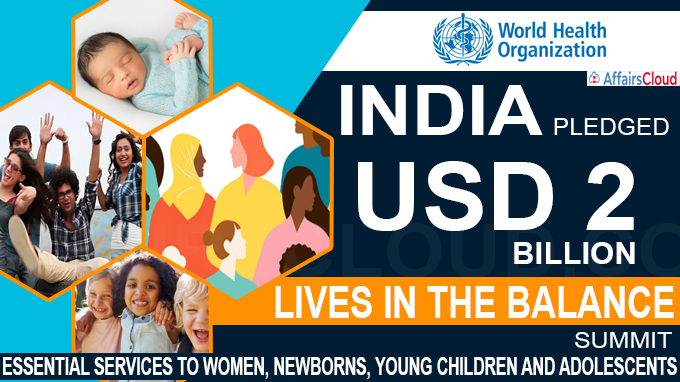 i.Bharti AXA Life Insurance Company Limited introduced ‘#GotYouCovered Campaign’, during the observation of Universal Health Coverage Day(December 12).
ii.The campaign is a special initiative to appreciate the frontline healthcare workers who are working to protect people from the ongoing COVID-19 pandemic.
iii.Bharti AXA Life Insurance has partnered with Primero Skills & Training Pvt Ltd
for its #GotYouCovered initiative.
iv.Aim of the Partnership– To support insurer’s healthcare workers during the pandemic times, by providing masks that will protect them against the life and health risks.
About Bharti AXA Life Insurance Company Limited:
Currently, it is a joint venture between  Bharti Group(51%) and AXA(49%)
Formed and commenced business operations– 2006
Managing Director(MD) and Chief Executive Officer(CEO)– Parag Raja
HeadOffice– Mumbai, Maharashtra
About Primero Skills & Training Pvt Ltd:
It is a skill development organisation that imparts free skills and training programmes to youth under the Atmanirbhar Bharat initiative of the Government of India.
Founder and Managing Director– Jayanta Das
HeadOffice-Delhi, India
<<Read Full News>> 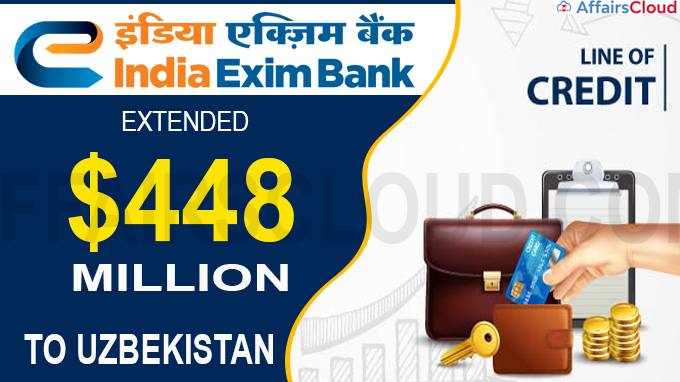 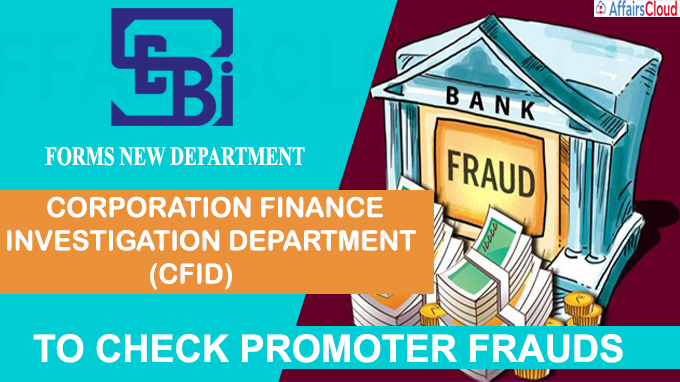 i.Market watchdog Securities and Exchange Board of India (SEBI) has set up a specialised department Corporation Finance Investigation Department (CFID) to tackle initial public offering (IPO) proceed fraud, diversion of funds, bank loans and resources by company promoters.
ii.This decision has been taken after the finance ministry had asked SEBI to act on promoters diverting investor funds for personal gains in November 2020 as there are a number of cases on these matters against Cox and Kings, DHFL (Dewan Housing Finance Corporation) and Vijay Mallya.
iii. The new department will be headed by one of SEBI’s executive director. Nagendraa Parakh, who is currently heading Market Intermediaries Regulation and Supervision Department (MIRSD) is named for the same.
About Securities and Exchange Board of India (SEBI):
Establishment– April 12, 1992
Chairman– Ajay Tyagi
Headquarters– Mumbai, Maharashtra
<<Read Full News>> i.On December 13, 2020, Reserve Bank of India (RBI) has decided to set up an Automated Banknote Processing Centre (ABPC) in Jaipur, Rajasthan for automated receipt, storage of fresh banknotes received from the printing presses, and then retrieval and dispatch of these banknotes to the identified issue offices (IOs)/currency chests (CCs).
ii.The centre will also demolish the destruction of soiled banknotes. The whole process will be done in an automated manner.
iii.This decision has been taken to effectively deal with increasing circulation of banknotes.
iv.Notably, volume of banknotes in circulation and supply of banknotes by the presses have increased three-fold from March 2001 to March 2019.
Static Points:
–RBI is the sole issuer of banknotes and responsible for management of currency.
–RBI is supplied with banknotes from four printing presses at Nasik,Maharashtra (Western India), Dewas, Madhya Pradesh (Central India), Mysore, Karnataka (Southern India) and Salboni, West Bengal (Eastern India).
–The coins are also minted at four mints viz, Mumbai (Maharashtra), Hyderabad (Telangana), Kolkata (West Bengal) and NOIDA (New Okhla Industrial Development Authority), Uttar Pradesh.
–The new banknotes and coins are received at 19 IO’s of the RBI from where these are further distributed to about 3,300 CCs operated by scheduled banks. The CCs act as store houses.
–The unfit notes withdrawn from circulation are verified through a Currency Verification and Processing System (CVPS) and destroyed by shredding.
<<Read Full News>> 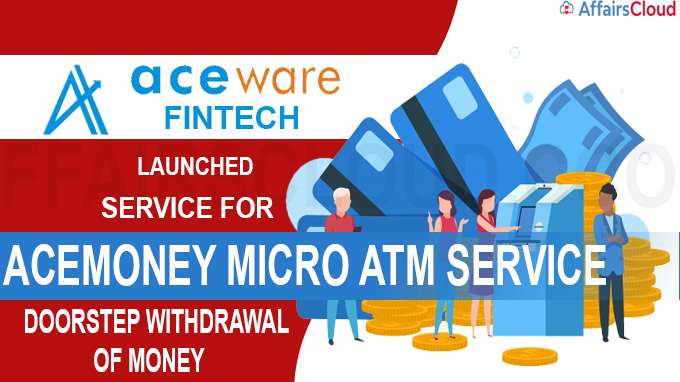 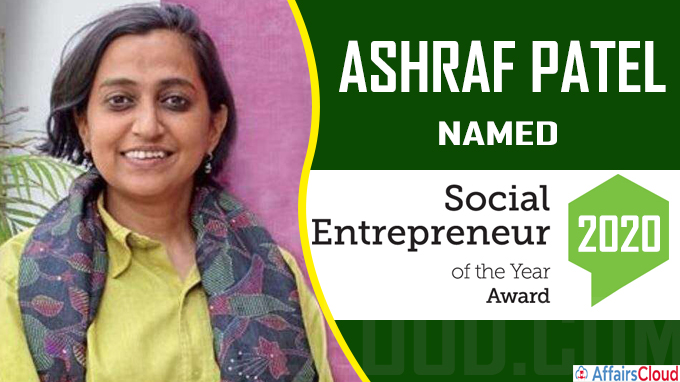 On November 26, 2020 Ashraf Patel of Pravah & ComMutiny Youth Collective (CYC) named as the winner of the 11th edition of Social Entrepreneur of the Year (SEOY)  Award – India 2020 at a virtual ceremony.

Reason for the Prize
Ashraf Patel has been developing a generation of empathetic, sensitive youth change-makers through psycho-social interventions, that helps them to build more inclusive identities and societies that bring about revolutionary changes.
Points to be Noted
i.Ashraf Patel will join the Schwab Foundation for Social Entrepreneurship Community, the world’s largest and prestigious network of social innovators from around the world.
ii.She will also participate in the  annual and regional meetings of the World Economic Forum (WEF). The meetings will offer opportunities to engage with global decision makers from the public, corporate, media, academic and civil society sectors.
About Ashraf Patel:
i.She is the founder member and board member of Pravah & ComMutiny Youth Collective.
ii.She has worked with SRF and Escorts Financial Services.
iii.She had served on many working groups including,  the Working Group for Youth and Adolescents set up by the Youth Ministry for the Eleventh Five Year Plan and  the Working Group for Adolescent Education set up by the HRD Ministry for the Twelfth Five Year Plan, among others.
About SEOY award:
i.The Schwab Foundation for Social Entrepreneurship and Jubilant Bhartia Foundation instituted the SEOY award in 2010 to promote  social innovation in India
ii.It recognises the entrepreneurs who implement the innovative, sustainable and scalable solutions to solve social problems of India.
Additional Info
Pravah was established in 1993 and ComMutiny Youth Collective (CYC) in 2007 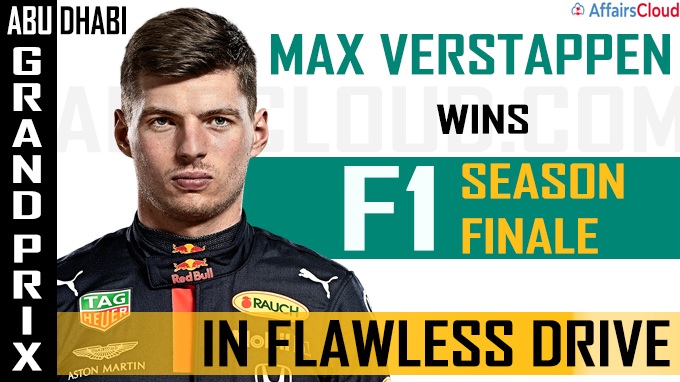 On 13th December, 2020 the Dutchman Max Verstappen won the Abu Dhabi Grand Prix 2020 in a crucial race, making his second win of the year 2020. He made his first win of the year at the special 70th Anniversary Grand Prix held at the Silverstone Circuit in the United Kingdom.
Valtteri Bottas (Finland) of Mercedes finished second in the Abu Dhabi Grand Prix 2020.He was followed by Lewis Hamilton(Great Britan) of Mercedes.
About Max Verstappen:
i.23-year-old, Belgium born Formula 1 racer representing Red Bull Racing Honda.
ii.At the age of 17 he became the youngest driver to compete in Formula 1 at the 2015 Australian Grand Prix for Scuderia Toro Rosso.
iii.Won 2 races in 2020- Special 70th Anniversary Grand Prix and Abu Dhabi Grand Prix
iv.Currently ranked World Number 3 in Formula 1 racing
About Formula 1:
Formula one or F1 is the highest class of International racing under Fédération Internationale de l’Automobile (FIA).
Had the inaugural session in 1950.
Celebrated 70th Anniversary with a special Grand Prix event in the United Kingdom in August 2020. On 13th December, 2020 Junior Asian Champion Yash Vardhan won gold medal in the 10 m air rifle event at the 6th International Online Shooting Championship (IOSC), the event saw the participation of Olympic bound Martin Strempfl of Austria who won the silver medal and Oleksandr Halkin from Ukraine won the bronze.
About International Online Shooting Championship (IOSC):
i.Aim- To promote Shooting across the globe through online competitions
ii.Started in 2020 amid the pandemic which also saw the active participation of Shooters from various countries.
iii.Organiser- Former Indian shooter Shimon Sharif
iv.6th Edition is the largest of all conducted so far, which saw the participation of shooters from 20 countries.
About Yash Vardhan:
17-year-old Indian Shooter currently ranked at 25th position in the world.
He Won Gold Medal at the Junior Asian Championship in 2019.
He Won Silver Medal at the ISSF Junior World Cup in 2019. On 13th December 2020, Renowned Sanskrit scholar, Padma Shri Bannanje Govindacharya, passed away at the age of 84 due to age related ailments at his residence in Ambalpady in Udupi, Karnataka. He was a great orator and a well-known propagator of Madhwa ideology. He was born on 3rd August 1936 in Udupi, Karnataka.
About Bannanje Govindacharya:
i.Bannanje Govindacharya who was well versed in Veda Bhashya, Upanishad Bhashya, Mahabharata, Ramayana, and Puranas has writer many commentaries on Veda Suktas, Upanishads, Shata Rudriya, Brahma Sutra Bhashya, and Gita Bhashya.
ii.He has translated various literary pieces and text from Sanskrit to Kannada.
iii.He wrote the screenplay of the Sanskrit film “Bhagavadgita” and “Shankaracharya”.
iv.He served as the brand ambassador of India at the 1979 World Conference on Religion and Peace held in Princeton, United States of America (USA).
Awards:
He received the Padma Shri for literature in 2009.
Books:
i.His translation works include, Bana Bhattana Kadambari of Bana Bhatta, Shakuntala of Kalidasa, Mrichakatika of Govindacharya, he had also translated various historical novel to Kannada.
ii.He has more than 4000 pages of Sanskrit Vyakhyana to his name with more than 50 odd books and 150 books, including other language books. 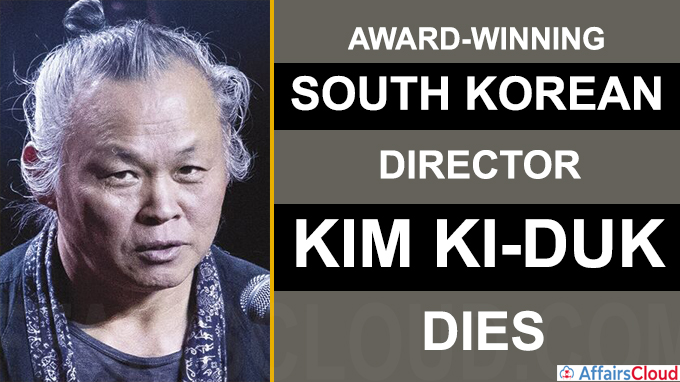 On 11th December, 2020 South Korean director Kim Ki-duk died at Lativa after getting infected by Corona virus. He was well known worldwide by receiving the top prize “The Golden Lion Award” at Venice Film Festival for his 2012 film “Pieta”.
The 59-year-old has won multiple awards in his career including the Best director at festivals in Venice and Berlin.He was born on 20 December 1960 in Bonghwa, South Korea.
International Awards received by Kim: On 11th December 2020, the former Indian Football player Dharmalingam Ethiraj passed away at the age of 87 at his residence in Bengaluru, Karnataka. He was a part of the Indian football team led by Chuni Goswami, which won the gold at 1962 Asian Games, Jakarta, Indonesia. He was born in 1934 in Ulsoor, Bengaluru, Karnataka.
About Dharmalingam Ethiraj:
i.He worked for MEG (Madras Engineering Group) and represented the Football team of MEG from 1957 to 1963.
ii.He played a crucial part for his team in reaching the final of the Delhi Cloth Mills (D.C.M.) Trophy in 1959.
iii.He represented the Services in the Santosh Trophy from 1958 to 1962 and he scored 5 goals for his team winning their first Santhosh trophy title against Bengal, the defending champions in 1960 – 1961.
iv.He represented the Mysore State from 1962 to 1965 and led the team in the 1965 Santosh Trophy held in Quilon(Kollam), Kerala.
v.He retired from the military services as Subedar in 1971 and served as a Junior Sports Officer from 1972 to 1981.
vi.He was made a life member of the Karnataka State Football Association and he also served as the state coach and a member of the selection panel.
Honours:
MEG named a stadium (within its premises) after Dharmalingam Ethiraj to honour his achievements. 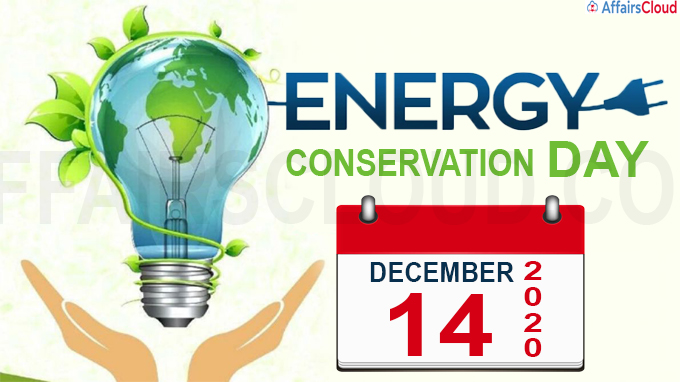 On 14th December, 2020 Chief Minister of Tamil Nadu Edapaddi K Palaniswami signed 18 Memorandum of Understandings (MoU) for 24 projects with multiple companies attracting investment in the state, which has the potential to create 54,218 jobs in the state.
i.On 14th December, 2020 Ola has signed a Memorandum of Understanding (MoU) with Tamil Nadu state government to set up a Rs. 2400 crore Electric vehicle manufacturing hub in the state, this turns out to be the world’s largest scooter factory.
ii.Electronic Vehicles has unique removable Banana battery, removable, light weight and capable of charging anywhere with its intelligent software.
About Tamil Nadu:
Capital- Chennai
Chief Minister- Edappadi K. Palaniswami
Governor- Banwarilal Purohit
<<Read Full News>>