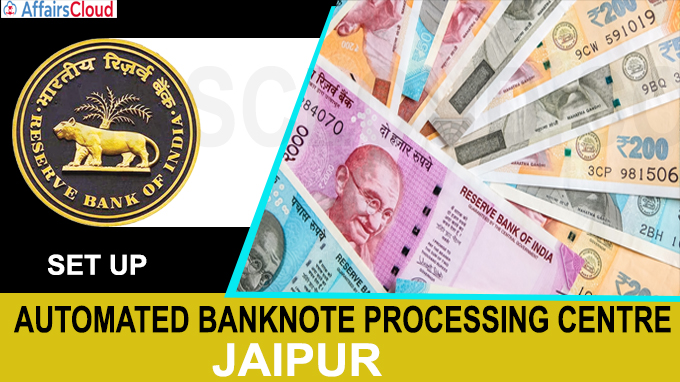 On December 13, 2020, Reserve Bank of India (RBI) has decided to set up an Automated Banknote Processing Centre (ABPC) in Jaipur, Rajasthan for automated receipt, storage of fresh banknotes received from the printing presses, and then retrieval and dispatch of these banknotes to the identified issue offices (IOs)/currency chests (CCs). The centre will also demolish destruction of soiled banknotes. This all process will be done in an automated manner.

The projected storage capacity requirements for the ABPC are as follows:

i.The Reserve Bank is all set to evaluate the impact of multi-media public awareness campaign ‘RBI Kehta Hai’, which was launched in 14 languages to educate public about good practices, regulations and initiatives in banking and financial sector.

ii.The Internal Working Group (IWG) of RBI which was formulated on June 12, 2020 to review extant ownership guidelines and corporate structure for Indian private sector banks has recommended an increase in the promoters’ stake in Private Banks to 26% from 15% of the paid-up voting equity share capital of the bank in 15 years.

–RBI is the sole issuer of banknotes and responsible for management of currency.

–The new banknotes and coins are received at 19 IO’s of the RBI from where these are further distributed to about 3,300 CCs operated by scheduled banks. The CCs act as store houses.

–The unfit notes withdrawn from circulation are verified through a Currency Verification and Processing System (CVPS) and destroyed by shredding.