We are here for you to provide the important Recent and Latest Current Affairs 11 July 2020, which have unique updates of Latest Current Affairs 2020 events from all newspapers such as The Hindu, The Economic Times, PIB, Times of India, PTI, Indian Express, Business Standard and all Government official websites. 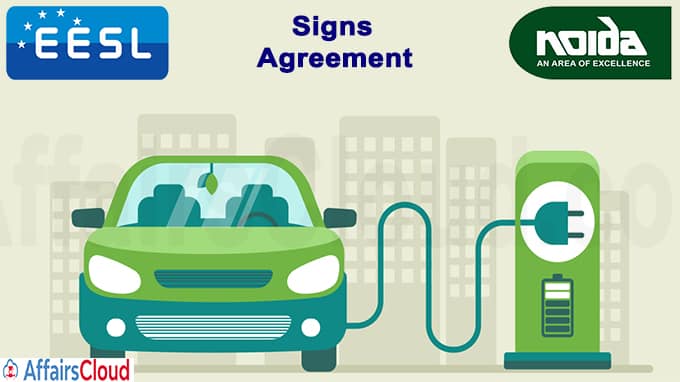 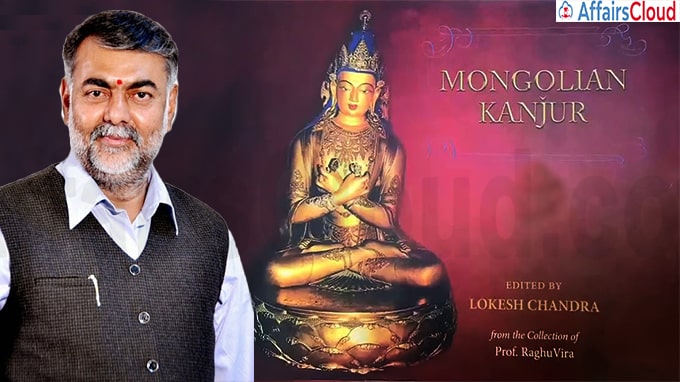 Under the National Mission for Manuscripts (NMM), The Ministry of Culture has taken up the project of re-printing 108 volumes of Mongolian Kanjur. A set of First Five manuscripts were presented to Shri Ram Nath Kovind, the President of India on Guru Purnima (Dharma Chakra Day) on 4th July 2020.
i.The Buddhist Canonical text in 108 volumes is the most important religious text in Mongolia.
ii.The present edition is being published by the National Mission for Manuscripts(NMM).
iii.The Mission is carried under the supervision of Prof. Lokesh Chandra, an eminent Scholar.
About Mongolia:
President- Khaltmaagiin Battulga
Capital & Currency- Ulaanbaatar & Mongolian Togrog/Tugrik
About Ministry of Culture and Tourism:
Minister of State (Independent Charge) – Shri Prahlad Singh Patel
<< Read Full News >> i.Indian Navy has successfully completed its 55 days and 23,000 kilometers long ‘Operation Samudra Setu’, which was launched on May 5, 2020 as a part of the national effort to repatriate (bring back) Indian citizens from 3 countries of Maldives, Iran, and Sri Lanka during the COVID-19 pandemic.
ii.Under this operation 3,992 Indian citizens brought back to India, which was conducted by Indian Naval Ships (INS) Jalashwa (Landing Platform Dock), and Airavat, Shardul and Magar (Landing Ship Tanks).
iii.This operation was undertaken by the Indian Navy in close coordination with Ministry of External Affairs (MEA), Ministry of Home Affairs (MHA), Ministry of Health and Family Welfare (MoHFW) and various other agencies of the Government of India (GoI) and State Governments.
About INS Jalashwa (L41):
Procured in 2005 from the United States (US), it was commissioned in Indian Navy in 2007. Formerly known as USS Trenton, is an amphibious landing dock capable of carrying over 1,000 people.
About INS Magar (L20):
Commissioned in 1987, INS Magar is the lead ship of Magar-class amphibious warfare vessels of the Indian Navy.She was built by Garden Reach Shipbuilders and Engineers, Kolkata, West Bengal.INS Magar is capable of carrying around 500 troops.
About Indian Navy:
Chief of Naval Staff (CNS)– Admiral Karambir SinghIntegrated Headquarters of Ministry of Defence (Navy)– New Delhi
<< Read Full News >> 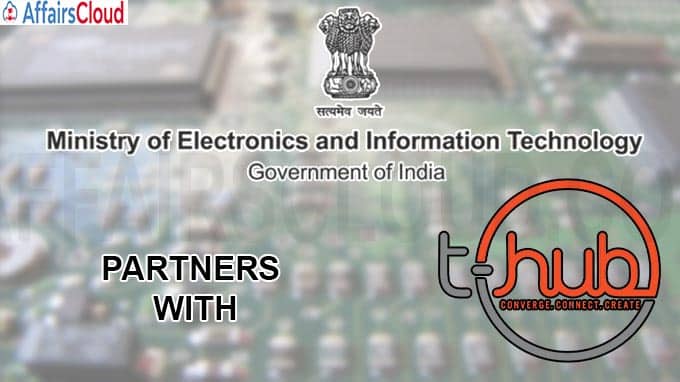 i.On 10th July 2020, T-Hub announced their partnership with the Ministry of Electronics and Information Technology(MeitY) and Digital India to lead the scale up program of Digital India for hardware and Internet of Things(IoT) startups and to support the startups with investments and market access.
ii.The programme under the partnership will start in July 2020.
About Ministry of Electronics and Information Technology(MeitY):
Cabinet Minister– Ravi Shankar Prasad
Minister of State– Sanjay Dhotre
About T-hub:
CEO– Ravi Narayan
Headquarters– Hyderabad, Telangana
<< Read Full News >> 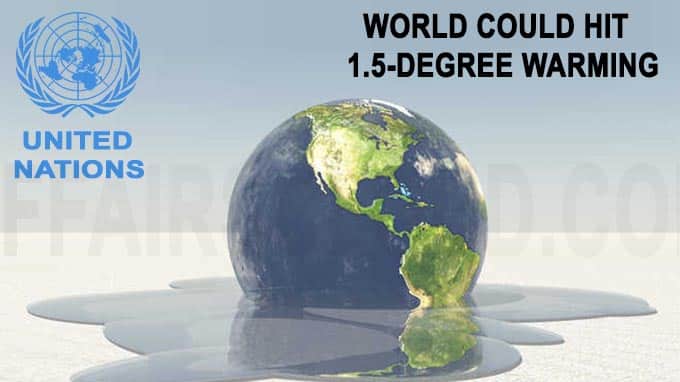 i.The United Nations (UN) weather Agency, World Meteorological Organization (WMO) in its “Global Annual to Decadal Climate Update for 2020-2024” has forecasted that the annual mean global temperature is likely to be at least 1° Celsius above pre-industrial levels (1850-1900) in each of the coming five years (2020-2024) and there is a 20% chance that it will exceed 1.5 degrees Celsius (2.7 Fahrenheit) in at least one year. Overall, it is very likely to be within the range 0.91 – 1.59°C.
ii.The 1.5 C mark is the level to which countries have agreed to try to limit global warming as per 2015 Paris accord. The agreement sets a goal of keeping global warming well below 2 degrees Celsius (3.6 Fahrenheit), ideally no more than 1.5 C.
About World Meteorological Organization (WMO):
Secretary-General (SG)– Petteri Taalas
Headquarter– Geneva, Switzerland
Members– 187 Member States and 6 Member Territories
<< Read Full News >> 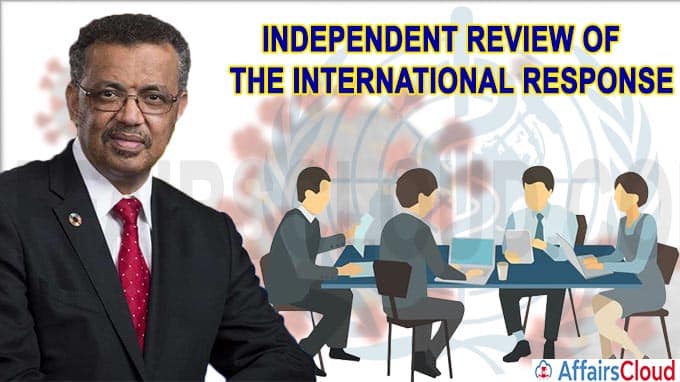 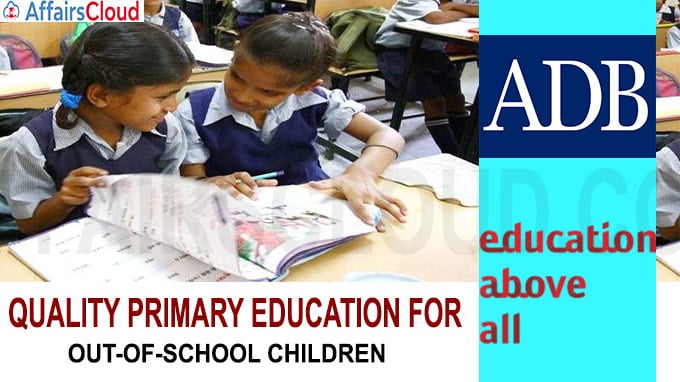 The Asian Development Bank (ADB) will help India and 9 other Asian nations to ensure quality education for the out-of-school and at-risk children in the primary level.
In its preliminary effort, ADB has entered into a 5-year agreement with Qatar-based Education Above All (EAA) Foundation to work jointly for project worth of $100 million to put at least 3.2 lakh out-of-school children, including refugees and internally displaced children into quality primary education.
About Asian Development Bank (ADB):
Headquarters– Mandaluyong, Philippines
President– Masatsugu Asakawa
Membership– 68 countries
About Education Above All (EAA) Foundation:
Location– Doha, Qatar
Chairperson– Sheikha Moza bint Nasser
<< Read Full News >>

i.The Insurance Regulatory and Development Authority of India (IRDAI) has allowed all general and health insurance companies to increase the sum insured on the Standard Individual Health Insurance Product namely “Arogya Sanjeevani” beyond Rs 5 lakh.
ii.Arogya Sanjeevani, is a product for which all insurers are mandated to offer had a cap of Rs 5 lakh on the sum insured and the minimum cover for it was of Rs 1 lakh. The regulator has now allowed insurers to offer sum insured as low as Rs 50,000 with no upper limit. The sum insured has to be in multiples of Rs 50,000.
About IRDAI:
Headquarters– Hyderabad, Telangana
Chairman– Dr. Subhash Chandra Khuntia
<< Read Full News >>

i.Mastercard has announced that it will invest Rs 250 crore(USD 33 million) to support Indian Small and Medium Enterprises(SMEs).
ii.To enable the SMEs to restart itself and help them in business recovery.
iii.SMEs have been hit hardest during the lockdown caused by COVID-19 due to their dependence on the cash-economy and disruption of the supply chain.
About MasterCard:
Headquarters– New York, United States
Chief Executive Officer– Ajay Banga ( Michael Miebach will take over as CEO on January 2021)
<< Read Full News >> 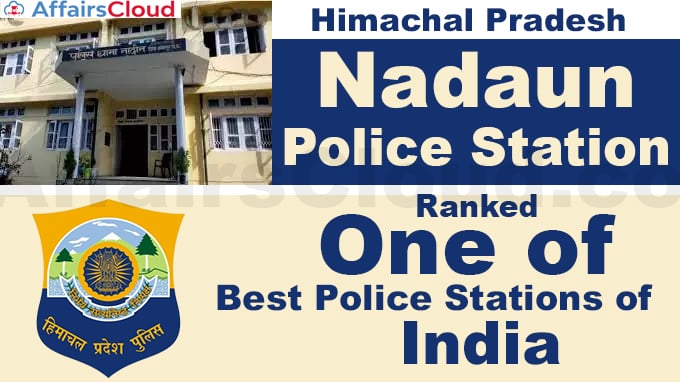 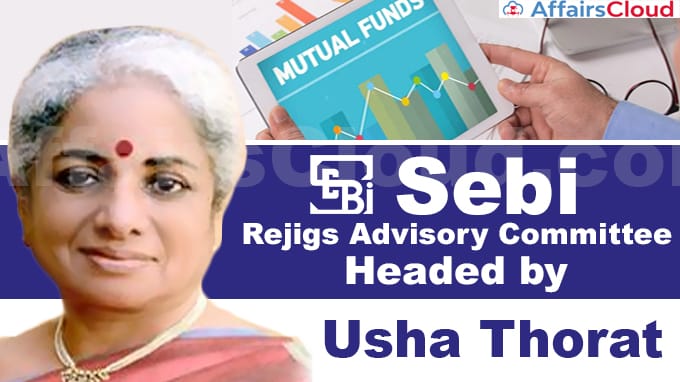 On July 10, 2020, Securities and Exchange Board of India (SEBI) has reconstituted the committee advising it on matters related to regulation and development of the mutual fund industry by including five new members.
i.The new 20 member committee, will be chaired by Usha Thorat, former deputy governor of Reserve Bank of India (RBI).
About Securities and Exchange Board of India (SEBI):
Headquarters– Mumbai, Maharashtra
Chairman– Ajay Tyagi
<< Read Full News >> On July 10, 2020 The Hockey India(HI) in its Executive Board meeting named Manipur’s Gyanendro Ningombam, who was senior vice-president in the federation, as officiating president till the end of September 2022 after Mohd Mushtaque Ahmad resigned on July 07, 2020 due to personal and family commitments.

About Gyanendro Ningombam
i.Gyanendro Ningombam has served as the Editor of Meeyam, an evening daily newspaper in Manipur.
ii.He has earlier served Manipur Hockey as its Chief Executive Officer from 2009 to 2014.
iii.After which he was elected as Vice President of Manipur Hockey from 2014 – 2018.
About Mohd Mushtaque Ahmad
He served as the Secretary General In HI from 2014-2018 and also as a treasurer from 2010-2014.
About Hockey India:
Headquarters– New Delhi, India
Secretary General– Rajinder Singh A book titled ‘His Holiness the Fourteenth Dalai Lama: An Illustrated Biography’ Authored by Tenzin Geyche Tethong to be Released 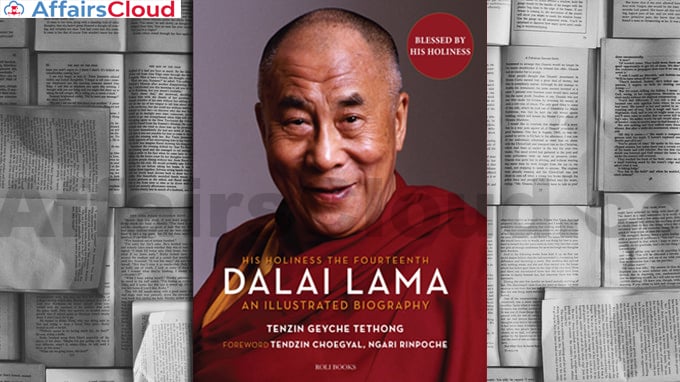 A book titled ‘His Holiness the Fourteenth Dalai Lama: An Illustrated Biography’ is  authored by one of the Dalai Lama’s closest aides and advisor of over 40 year, Tenzin Geyche Tethong. The biography is a memorable portrait of the 14th Dalai Lama, Tenzin Gyatso. The book is to be released in October 2020 and is published by Roli Books.

About the Book
i.The book comprises nearly 400 unseen photographs and unpublished documents, archival material and also memories of those close to him so as to portray a composite picture of his exile, his sympathetic mannerism and the present troubled relationship with his homeland, Tibet.
ii.The book gives a glance of an important part of the history  before he was forced to flee to India in March 1959.
Key Info:
It will also be published globally in several other languages including German, Dutch, Russian, Italian, Czech, Estonian, Lithuanian and Slovak
About Dalai Lama
It is the title given by the Tibetan people for the foremost spiritual leader of the Gelug or “Yellow Hat” school of Tibetan Buddhism, the newest of the classical schools of Tibetan Buddhism.
Note– The 14th Dalai Lama was awarded the Nobel Peace Prize in 1989 for his teachings of peace and non-violence and freedom. 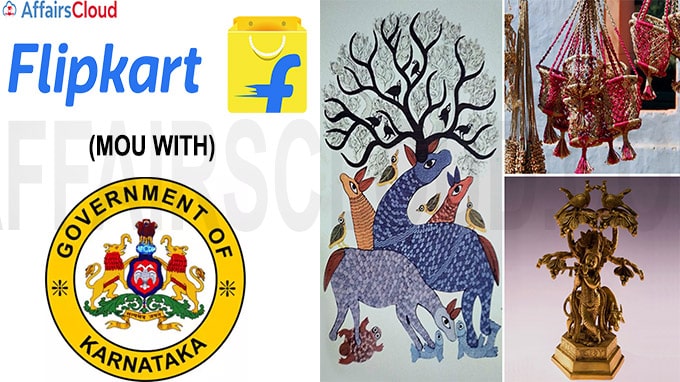 i.Maharashtra Housing Minister Jitendra Awhad announced that the state govt and State Bank of India(SBI) will set up a stress fund to revive Slum Rehabilitation Authority(SRA) projects(about 370 projects)  in the Mumbai Metropolitan Region (MMR) and other urban areas of the state.
ii.For this purpose, the state govt will  inject Rs 700 crore to Rs 1,000 crore in this fund as a financial support. SRA will act as the nodal agency under the Housing Ministry to implement the slum redevelopment schemes.
About Maharashtra:
Capital– Mumbai
Governor– Bhagat Singh Koshyari
Chief minister– Uddhav Thackeray
<< Read Full News >> 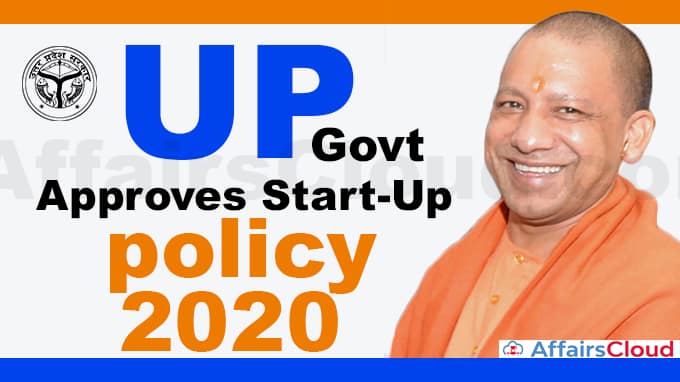 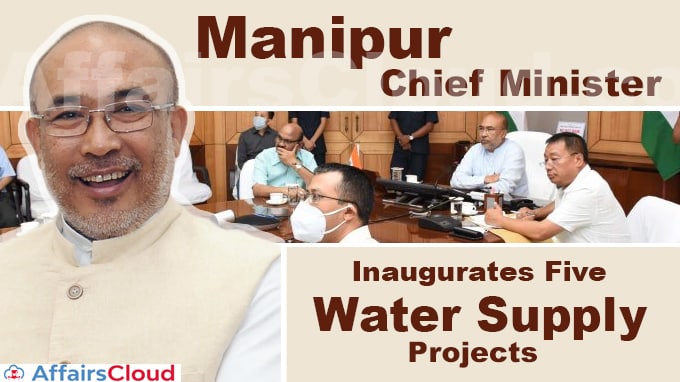 i.Manipur Chief Minister(CM) N. Biren Singh inaugurates 5 Water Supply projects worth Rs 48.39 crore, which have a total capacity of more than 26.15 millions of liters per day through video conferencing from the Chief Minister’s Secretariat, Imphal.
ii.With addition to the projects one office building of Weight and Measures Department and Rapid Antigen Detection Testing Centre at Jiribam were also inaugurated.
iii.The New Development Bank has sanctioned Rs 3,000 crore to provide drinking water to every household of the state and work orders for the projects have been issued.
About Manipur:
Capital– Imphal
Governor– Najma Heptulla
<< Read Full News >> 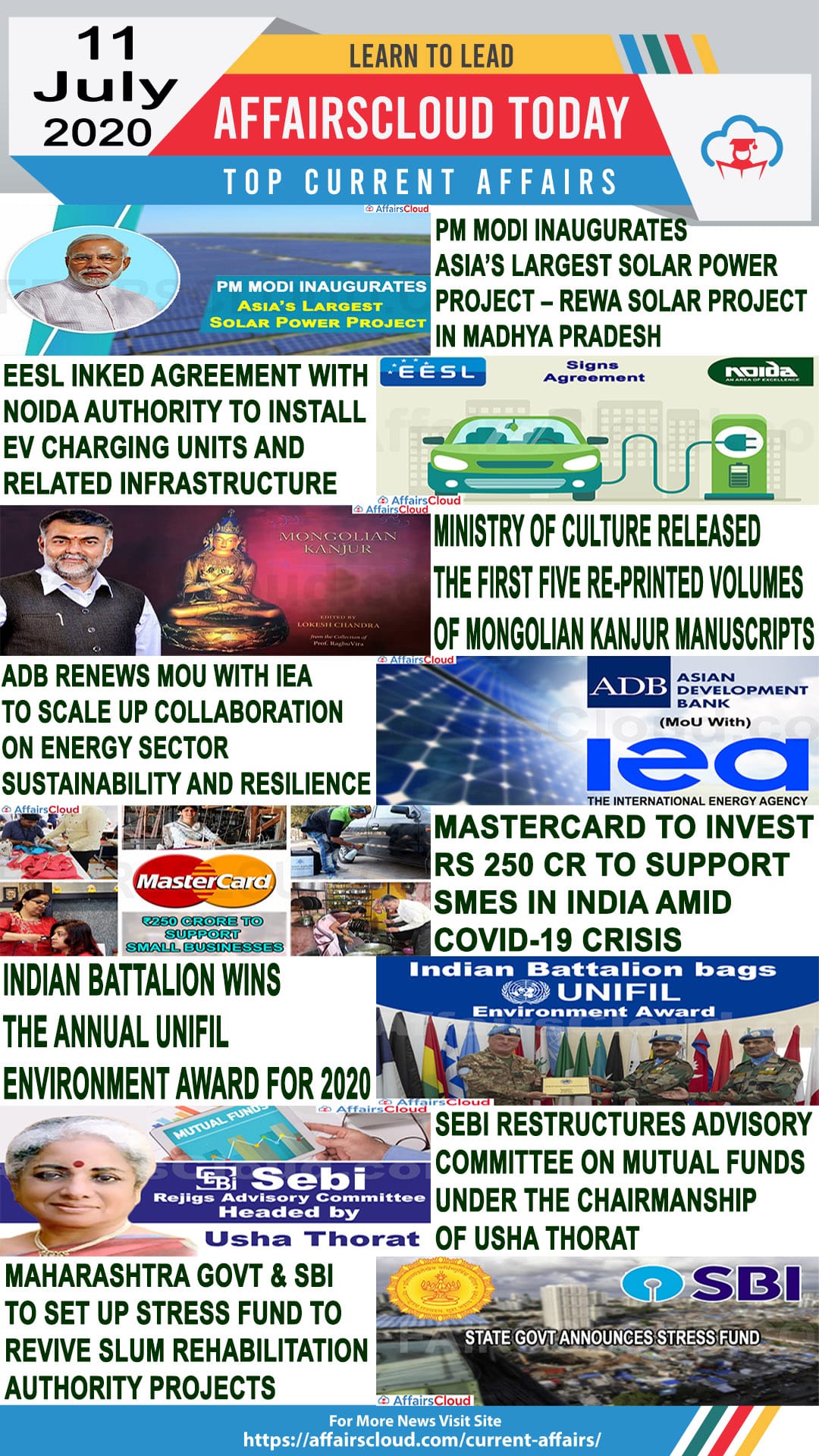