Govt. has adopted comprehensive and integrated coastal security scheme
i. Government has adopted a comprehensive and integrated coastal security scheme to strengthen the country’s coastal network, was stated by Union Home Minister Rajnath Singh after commissioning Coast Guard ship ‘Sarathi’ in Goa in the presence of Defence Minister Manohar Parrikar.
ii. The government has started the process of security audit to identify vulnerable areas in the seas and along the coastline.Maritime terrorism continues to be a security threat as we have a long coastline with many big cities and security installations
iii. The Home Minister hailed Indian Coast Guard as the central pillar of India’s security architecture with two other important pillars of Navy and Marine Police.
iv. The Coast Guard ship ‘Sarathi’ is the third in the series of six 105 meters offshore patrol vessels.’Sarathi’ meaning ‘charioteer’ is a projection of Indian Coast Guard’s will and commitment to serve and protect the maritime interests of the nation. 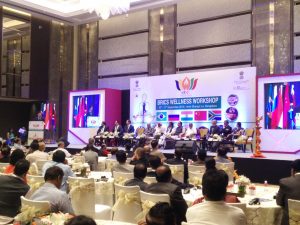 ii. The workshop to be held at Hotel Shangrila will be attended by delegates from Brazil, Russia, India, China and South Africa (BRICS) to explore areas of mutual co-operation.
iii. The workshop Arogya was  organised jointly by Ministry of Ayush, Karnataka government and Federation of Indian Chambers of Commerce and Industry.
iv. It was a four-day health fair on Ayurveda, Yoga and Naturopathy, Unani, Siddha and Homeopathy at Gayathri Vihar, Palace Grounds.
v. International researchers, manufacturers and processors from 13 states will participate in the fair. The National Medicinal Plant Board was organized a buyer-seller meet on September 10.
vi. Over 500 farmers from Karnataka and neighboring states were expected to interact with over 150 industries. Entry to the fair is free and opened to public from 11 am to 8 pm. 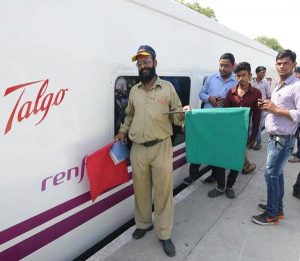 ii. The Talgo train covered 1,389 km Delhi-Mumbai distance in 11 hours and 48 minutes, at the speed of 150 kmph, said Ravinder Bhakar, chief public relations officer of Western Railway (WR).
iii. The train left from New Delhi at 2.45 p.m. and reached Mumbai in 11 hours 42 minutes –– two minutes ahead of its scheduled time.
iv.The Talgo coaches have the feature of natural tilting while travelling on curves which enabled them to achieve approximately 20 percent higher speed in comparison to the conventional coaches
v. The Railway Ministry also announced that Hum safar trains – a special-class service comprising AC 3-Tier coaches — are set for launch next month.Their fares that would be about 20 per cent higher than for the normal Mail and Express trains.
vi. Humsafar would be fully air conditioned third AC service with an optional service for meals. It is a special-class train for inter-city overnight journey with many additional facilities which are otherwise not available in normal AC 3-tier coaches, like close circuit TV, GPS-based passenger information systems, fire and smoke detection System.

WHO regional meeting for South East Asia in Sri Lanka adopted the Colombo Resolution
i. Sri Lanka worked with The South-East Asia Region of the World Health Organization (WHO-SEARO).  It is the first of WHO’s   six regional outfits. WHO SEARO provided leadership on health matters and relevant policy options and technical support.
ii. For over 50 years , the collaborative efforts of WHO and SEARO, has focused on improving the health of the people in the Region
iii. The 69th Session was attended by around 200-250 official delegates from over 15 countries, including Health Ministers from the 11 Member Countries
iv. The forum would offer an ideal platform for our health officials to share knowledge on recent developments and advances in addressing national health issues.
v. The event was expected to   receive much focus at the World Health Assembly to be held in Geneva in May 2016 and the Colombo Declaration to be adopted at the 69th Session would set the stage for the WHO regional programmes.
vi. The five day event from 5th-9th September will also help to show-case Sri Lanka’s achievements in the health sector and the progress the country has made in socio-economic development while highlighting its tourism potential.
vii. The Regional Committee has eleven Member Countries: Bangladesh, Bhutan, Democratic Peoples’ Republic of Korea, India, Indonesia, Maldives, Myanmar, Nepal, Sri Lanka, Thailand and Timor Leste. It was started in 1948.

World’s longest bullet train network established in China
i. World’s longest bullet train network length of 2000kms established by China Railway. Construction of the line started in December 2012
ii. The line has 9 stations and trains run at a speed of up to 300 kph.
iii. China is conducting feasibility study to build the bullet train track between Chennai and New Delhi.
Keys:
♦ The first passenger train in Britain running between Liverpool and Manchester in 1830.
♦ The longest railway platforms – Gorakhpur railway station, Uttar Pradesh

UK Surgeons use robot to operate inside eye in world first
i.The Surgeons at John Radcliffe Hospital in the UK used Robot to remove a membrane and restore sight of Bill Beaver for the first time. He is 70.
ii.The Preceyes surgical robot was developed by a Dutch company, a spin-out of Eindhoven University of Technology in the Netherlands. 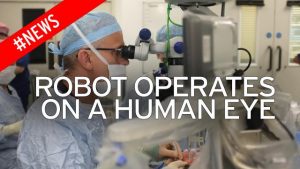 iii.The surgeon uses a joystick and touch-screen to guide a thin needle into the eye, while monitoring its progress through a microscope.
United Kingdom:
♦ Capital: London
♦ Prime minister: Theresa May
♦ Currency: Pound sterling

Bombay Stock Exchange filed for the much-awaited IPO on NSE
i. BSE Ltd, India’s second-biggest stock exchange filed for an initial public offering (IPO) in order to list its shares on larger rival National Stock Exchange (NSE).
ii. BSE filed draft papers with markets regulator Sebi to raise an estimated Rs 1,200 crore to Rs 1,300 crore through initial public offering (IPO).
iii. BSE will be the first Indian stock exchange and the second bourse in the country to be listed. In 2012, Multi Commodities Exchange (MCX) became the first bourse in the country to get listed.
iv. NSE, the largest stock exchange in India by turnover, is also gearing up for listing. 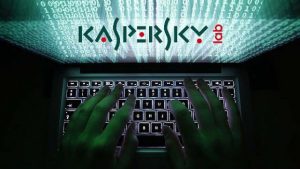 The first Cyber security Index launched by Kaspersky Lab to measure the current cyber threat levels faced by Internet users.
♦ Kaspersky Lab has worked with B2B International to carry out regular large-scale online surveys in different countries to evaluate how Internet users behave online  what their concerns, what issues they face and how they defend themselves against possible threats.
Cyber security Index :
i.The Kaspersky Cyber security Index is based on the data, collected from thousands of users across the globe in 21 countries in August 2016.The index will combine three indicators which will be measured every six months to assess the level of risk.
ii.The Cyber security Index described as 21-29-60 shows that one-in-five users (21%) currently believe he or she is threatened by anything online. At the same time, almost one third of users (29%) have fallen victim to cybercriminal schemes
iii.However, only 60% of users have installed security solutions on all the devices they use to access the Internet.

Centre issues fresh guidelines for flexi-fund for CSS
i. Government has issued fresh flexi-fund guidelines that is  given more freedom to states in spending money under the Centrally Sponsored Schemes (CSS) to meet local developmental requirements.
ii. Under the new norms, flexi-funds in each CSS has been increased from the current 10% to 25% for states and 30% for Union Territories.
iii. Finance Ministry declared that  States could  use the fund to undertake mitigation or restoration activities in case of natural calamities, or to satisfy local requirements in areas affected by internal security disturbances
iv. Centrally Sponsored Schemes (CSS) are schemes that are implemented by State governments of India but are largely funded by the Central Government with a defined State Government share.
v. Some examples of such schemes are Mahatma Gandhi National Rural Employment Guarantee Act, Pradhan Mantri Gram SadakYojana etc.

Subramanian Swamy was awarded ‘Tamil Ratna’ in US 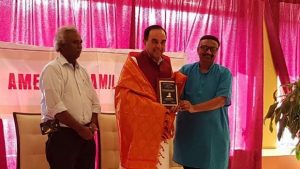 Chinappa rises to 10th in PSA rankings
i. In Women’s Ranking Indian squash player Joshna Chinappa rose  to 10th while Deepika Pallikal remained  at 19th in the latest Professional Squash Association (PSA) rankings.
ii. Chinappa, who who had slipped to 12th after initially breaking into top-10 in July, has regained the position even as Pallikal held on to the 19th position.
iii. In the men’s rankings, Saurav Ghosal dropped to 21st from his previous perch of 17th. Mahesh Mangaonkar gained a position to be on 60th, while Vikram Malhotra remained 73rd.
iv. The Professional Squash Association (PSA) is the governing body for the men’s and women’s professional squash circuit.
Keys :
♦ Founded in :1975
♦ President :James WillStrop(Men),Jenny Duncalf(Women)
♦ Location  : Leeds ,England. 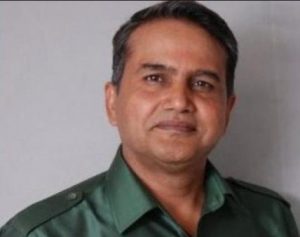