About Agriculture Leadership Summit and Award :- 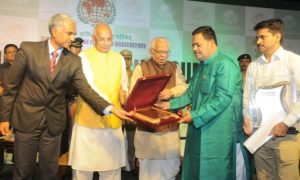 Odisha is one of the 29 states of India, located in the eastern coast. It is surrounded by the states of West Bengal to the north-east, Jharkhand to the north, Chhattisgarh to the west and north-west, and Andhra Pradesh to the south and south-west. Odisha has 485 kilometres of coastline along the Bay of Bengal on its east, from Balasore to Malkangiri.