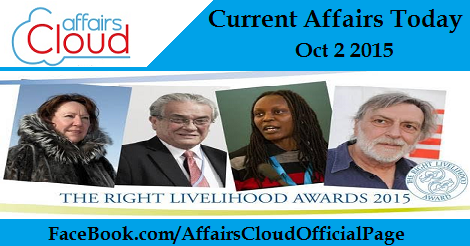 Maharashtra government has decided to impose drought tax for raising funds around Rs 1,600 crore in the next 5 months to cope with a drought situation. This tax is temporary.

ITEMS ON WHICH TAX WILL IMPOSED

This is the first time after 1973 disastrous famines that state government had levied a tax to tackle with crisis.

Government has already spent around Rs. 3,332.57 crore through various schemes and programmes to help the drought-hit farmers.

Mid-day Meals to be tested by Labs Every Month

According to provisions mid-day meals provided to students at schools will be tested every month by certified government food research laboratories or any other laboratory recognised by law to ensure nutritional standards and quality.

On the commemoration of “1000 Days” 40 years of Integrated Child Development Services Scheme (ICDS)campaign launched by West Bengal Department of Child Development and Social Welfare and UNICEF to reach out to every mother and child across the state for their healthier and prosperous future.

After 2 years of debate the controversial resolution titled “Promoting reconciliation, accountability and human rights in Sri Lanka” has been adopted by United Nations Human Rights Council during its 30th session to undertake an investigation of war crimes which led to serious violations and abuses of human rights during Sri Lanka’s battle against LTTE (Liberation Tigers of Tamil Eelam).

The resolution was backed 25 countries and also with US, UK and Sri Lanka itself which results in consensus i.e. without any vote during the session of 47 member states United Nations Human Rights Council.

It is aimed at to establish a judicial process which includes foreign judges and prosecutors, to investigate alleged war crimes during Sri Lanka conflict with Tamil rebels that were ended in 2009 and those who are responsible for crime should be punished.

Five district Gram Panchayats have been selected for the “Gandhi Grama” award. The award was presented by Mr. Siddaramaiah at a function organised by the Rural Development and Panchayat Raj Department at the banquet hall of Vidhana Soudha on October 2.

The best female teenage magician of India award is presented by Toni Hassini chief executive officer of the IMA.

The International Day of Non-Violence is observed on 2 October on the 146th birth anniversary of “Father of Nation” Mahatma Gandhi. This day is observed annually from 2007.