We are here for you to provide the important current affairs may 19 2017 which have unique updates of all daily events from all newspapers such as The Hindu, The Economic Times, PIB, Times of India, India Today, Indian Express, Business Standard, all Government official websites. Our complete current affairs helps you to get more marks in Banking, insurance, UPSC, SSC,CLAT , Railway and all other competitive Exams. 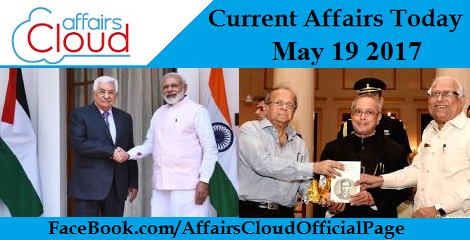 GST Council finalises tax rates on 80-90% goods, services
On May 18, 2017, the Goods and Services Tax (GST) Council headed by Union Finance Minister Arun Jaitley and comprising representatives of all states has finalised tax rates on 80-90% of goods and services under four brackets (5%, 12%, 18% and 28%). Essential items of daily use have been kept in the lowest bracket of 5%.
i. The GST Council also approved 7 set of rules for the Goods and Services Tax (GST) regime that will be rolled out from July 1, 2017.
ii. GST will replace 16 current levies (7 central taxes and 9 state taxes), consequentially
iii. GST rates on six categories of products—gold, bio-diesel, beedi and cigarettes, footwear, textiles and agricultural implements—will be finalised in council’s next meeting scheduled to be held on June 3, 2017 in Delhi.

Palestine President Mahmoud Abbas four day visit to India
On May 14, 2017, Mahmoud Abbas – President of Palestine, arrived in India for a 4-day official visit.During the course of his visit, Mr. Abbas held extensive talks with Indian Prime Minister Narendra Modi on key bilateral, regional and international issues including the Middle East peace process.
i. Palestinian President Mahmoud Abbas presented a mosaic and an artwork to Prime Minister Narendra Modi with his name written in it in Arabic.
ii. India and Palestine signed five MoUs

Srinagar gets first semi-mechanised Car parking facility
A semi-mechanised car park, the first of its kind in Jammu and Kashmir has inaugurated by Chief Minister Mehbooba Mufti.
Key Points: 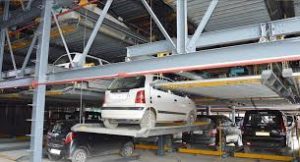 i. It aims to ease traffic congestion in and around Lal Chowk.
ii. It has been set up at a cost of Rs 27.15 crore and has a capacity to hold 288 vehicles.
iii. The car parking facility is the first of its kind in the state as most of the operations during car parking would be automatic, including collection of fee and receipts.
iv. The drivers will have to just place their vehicles over an automated pallet and it would be placed in an available vacant slot.
v. The parking facility comprises four bays with each having a parking space for 72 vehicles.
vi. It is spread over an area of 1,545 square metres in the city’s busiest commercial place.

Pune doctors successfully perform country’s first uterus transplant
A team of Pune doctors successfully performed country’s first womb (uterus) transplant on a 21-year-old Solapur woman on 18th of May.
Key Notes:
i. Since birth the woman has been suffering from congenital absence of uterus. It was fitted with her mother’s womb so that she can conceive normally.
ii. Transplant performed only through open surgery and it took nine hours.
iii. The donor did not even require blood transfusion because the majority of the retrieval part was done through minimally invasive key hole surgery medically known as laparoscopic surgery.
iv. Pune’s Galaxy Care Laparoscopy Institute (GCLI), where the surgery was done, has been granted a licence by the state’s Directorate of Health Services to carry out the uterus transplant.

India ranks at 154, below Sri Lanka and Bangladesh, on healthcare index
India has ranked 154th among 195 countries on healthcare index in Lancet medical journal’s report titled ‘Global Burden of Disease’. Performance of countries was assessed for a period of 25 years from 1990-2015, based on death rates from 32 diseases that could be avoided by effective medical care.
i. This study has been funded by the Bill & Melinda Gates Foundation.
ii. The Indian healthcare industry has been growing at a phenomenal rate. During 2008-20, it is expected to clock a Compound Annual Growth Rate (CAGR) of 16.5%.The industry size is expected to touch US$ 280 billion by year 2020. 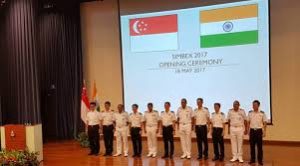 counter Exercises.
v. This exercise aims at increasing the interoperability among the two navies as well as developing a common understanding and procedures among the two navies for maritime security operations.
vi. The Indian Navy will be represented by Indian Naval Ships Shivalik, Sahyadri, Jyoti and Kamorta, one P8-I Maritime Patrol and Anti-Submarine Warfare Aircraft.
vii.The Singapore Navy will be represented by naval ships Supreme, Formidable and Victory, Maritime Patrol Aircraft Fokker F50 as well as RSAF F-16 aircraft.

RBI issues new branch expansion norms
To promote financial inclusion, the Reserve Bank of India (RBI) has allowed the opening of mini branches or banking outlets across the country without taking permission from the regulator.
Key Points:
i. It is applicable to all domestic scheduled commercial banks except Regional Rural Banks.
ii. According to RBI norms banks need to open atleast 25 per cent of their banking outlets in a year in unbanked rural centres.
iii. The RBI also clarified that ATM kiosks, cash depositing counters and mobile branches will not be treated as banking outlets.
iv. RBI also mentioned that the first branch opened in a tier five or tier six city will be counted as a banking outlet.
v. RBI has made the banks’ management board responsible for overseeing their deployment and their proper functioning.
vi. Banking outlet is a fixed point service delivery unitwhere services of acceptance of deposits encashment of cheques withdrawal or lending of money are provided. 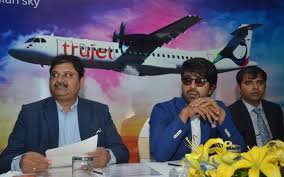 i. The Director General of Civil Aviation (DGCA) on 17 May 2017 issued the first air operator certificate in the scheduled commuter category to Turbo Megha Airways.
ii. The five airlines awarded the rights to fly UDAN flights are Air India, SpiceJet, Turbo Megha, Air Odisha and Deccan Air.
iii. Prime Minister NarendraModi had launched the first flight under UDAN (Uday Desh Kaa Aaam Naagrik) on the Shimla-Delhi route on 27 April 2017.
iv. That flight will be operated by Alliance Air, the regional arm of Air India. 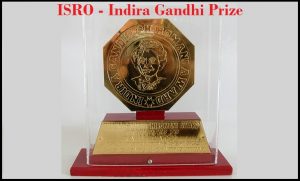 Gandhi Peace Prize to the Indian Space Research Organisation (ISRO) at a function in New Delhi.
i. The prize was announced in the year 2014 by the jury headed by the Vice President M. Hamid Ansari.
ii. The Prize was presented to AS Kiran Kumar – Chairman of ISRO, in presence of Sonia Gandhi, Chairperson of the Indira Gandhi Memorial Trust (IGMT).

Indian-origin steel tycoon bags prestigious ‘CEO of the Year’ award in UK
Britains Indian-origin steel tycoon Sanjeev Gupta has bagged a top global award ‘CEO of the Year’for his successful acquisitions.
i. Sanjeev is the executive chairman of the Liberty House Group has received the title “CEO of the Year” at the prestigious Platts Global Metals Awards in London on 18th of May.
ii. He was chosen from a shortlist of 10 top metal industry executives, including Indian CEOs Sajjan Jindal of JSW Steel and Prakash Kumar Singh of the Steel Authority of India.

IIT Delhi researchers develop cheapest respiratory filter
Researchers of Indian Institute of Technology Delhi have developed the device ‘Naso filters’.
Key Points:
i. It is capable of restricting up to 95% of dust and air pollutants.
ii. It gives protection against the finest particulate pollutants especially the PM2.5 concentration.
iii. It is the cheapest Naso filter available costing Rs 10.
iv. The researchers involved in the project were recently awarded with the “National Startups Award” by President Pranab Mukherjee.
v. The filter is capable of getting struck with the user’s nasal orifice.
vi. It would prevent the entry of foreign particulate matter like PM2.5 particles, bacteria and pollen allergens.
vii. It offers protection for at least eight hours and therefore helps in reducing the risk of respiratory diseases.
viii. The design of the filter provides good breathability and comfort.

Scientists discover first Natural Human Antibodies against Ebola Virus
A team of scientists from the United States have discovered a possible cure for all five known Ebola viruses, one of which severely damage West Africa in recent years.
Key Points:
i. A team of scientists discovered the first natural human antibodies that can neutralize and protect animals against all three major disease-causing Ebola viruses.
ii. Kartik Chandran, a Professor in the Department of Microbiology at the Albert Einstein 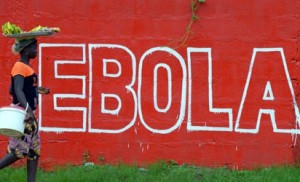 College of Medicine in Bronx, New York, helped in identifying the antibodies.
iii. The study was co-led by John M Dye, Chief of viral immunology at the US Army Medical Research Institute of Infectious Diseases (USAMRIID).
iv. The research was published online in journal Cell as ‘Antibodies from a human survivor define sites of vulnerability for broad protection against Ebola viruses’ on 18 May 2017.
v. The findings could lead to the first broadly effective Ebola virus therapies and vaccines.These antibodies can be used as a single therapy to treat all Ebola viruses.

Green court NGT bans open defecation, waste dumping on Yamuna floodplains
A Green court NGT has banned open defecation and waste dumping on the floodplains of the Yamuna.
Key Points:
i. It is headed by the Chairperson Justice Swatanter Kumar.
ii. The NGT has also constituted a committee under the head of Delhi Jal Board CEO to oversee the cleaning works of the river.
iii. The project involves works like sewerage,interception and diversion of drains, sewage treatment plants, low-cost sanitation.
iv. A fine of Rs 5,000 on people who will violate the rules and regulations.
v. The STPs which is set up under Phase 1 of the ‘Maili se Nirmal Yamuna Revitalisation Project 2017’ almost 67% of the wastewater reaching Yamuna are to be treated.
vi. NGT has ordered the Delhi government and the municipal corporations to immediately tak e action against those polluting industries which function in residential areas.
vii. Out of the total 14 STP projects that are to be built for treating wastewater, seven STP projects will be built by the Delhi Jal Board with its own funds.

Indian cricket team retains No.1 spot in ICC Test rankings, SA hot on heels
India retained its No.1 position on the International Cricket Council (ICC) Test team rankings.
Key Points:
i. India has moved to 123 points after gaining one point.
ii. While second-ranked South Africa now has bowed from 109 points to 117 points.
iii. This jump means the pre-update gap of 13 points has now been trimmed to just six points.
iv. Australia has retained their third place but has plummeted from 108 points to 100 points.
v. England are in fourth but have slipped to 99 points.
vi. Sri Lanka are seventh on 91 points (up by one), West Indies eighth on 75 points (up by five), Bangladesh ninth on 69 points (up by three) and Zimbabwe 10th with zero points (down by five).

The President of India Pranab Mukherjee, on 18 May 2017 received the first copy of book ‘Metaphysics, Morals and Politics’ in Kolkata, West Bengal.
Key Point:
i. The book is authored by Professor Amal Kumar Mukhopadhyay.
ii. President Mukherjee thesis was published in a book titled The Ethics of Obedience. 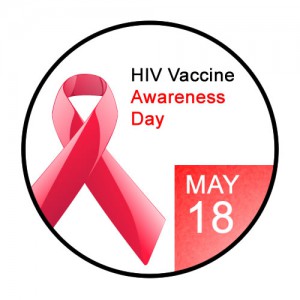 Key Notes:
i. HIV vaccine marks the day by promoting the continued urgent need for a vaccine to prevent HIV infection and AIDS.
ii. It is observed to raise awareness for AIDS vaccines, educate communities about HIV prevention.
iii. The first World AIDS Vaccine Day was observed on May 18, 1998, to commemorate the anniversary of Clinton’s speech, and the tradition continues today.