We are here for you to provide the important Recent and Latest Current Affairs 30 October 2019, which have unique updates of Latest Current Affairs 2019 from all newspapers such as The Hindu, The Economic Times, PIB, Times of India, PTI, Indian Express, Business Standard and all Government official websites.

Our complete Current Affairs October 2019 will help you to get more marks in Banking, Insurance, SSC, Railways, UPSC, CLAT and all State Government Exams. Also try our Latest Current Affairs Quiz and Current Affairs PDF which will be a pedestrian to crack your exams. 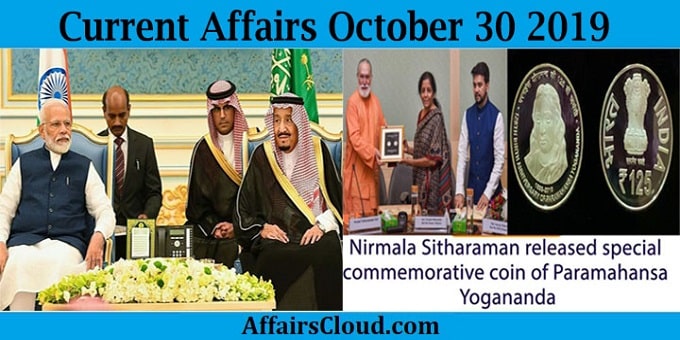 India to adopt Brazil model of human milk bank to achieve BM reach to 70% infants by 2025
On October 30, 2019, The Minister of State (MoS) for Health and Family Welfare Mr Ashwini Kumar Choubey stated that India will adopt the Brazil model of human milk bank. India’s target is to achieve at least 70% infants to have access to breast milk (BM) by 2025 and it will subsequently be increased to 100%.
i.The Minister had attended the BRICS (Brazil, Russia, India, China, South Africa) Health Ministers Conference 2019 in Brazil. The Prime Minister of India Shri Narendra Modi paid a 2-day visit from October 28-29, 2019, to the Kingdom of Saudi Arabia at the invitation of the Saudi King Salman bin Abdulaziz Al-Saud for attending the Plenary Session of the 3rd Future Investment Initiative Forum being held in Riyadh. The visit, which is the second visit of Prime Minister Modi to the Kingdom in three years, also had the aim of boosting bilateral ties between the two countries in key sectors including energy and finance.

Pakistan releases coin worth PKR 50 to commemorate 550th birth anniversary of Baba Guru Nanak
On October 29, 2019, The government of Pakistan released a new coin worth Pakistan Rupees (PKR) 50 to commemorate the 550th anniversary of Baba Guru Nanak. It will be available at the Kartarpur Sahib along with a postal stamp worth PKR 8 to the traveling pilgrims.
Key Points:
i.On October 24, 2019, India had signed an agreement with Pakistan on the modalities for operationalising Kartarpur Sahib corridor which connects Dera Baba Nanak shrine in Gurdaspur in India to Darbar Sahib Gurdwara in Kartarpur, Pakistan.
ii.In this regard, India shared a list of 575 pilgrims scheduled to attend the inaugural ‘jatha’ to Gurudwara Kartarpur Sahib through the Kartarpur corridor and Islamabad will levy $20 as a service charge on each Indian.
About Pakistan:
♦ Currency: Pakistani rupee
♦ Capital: Islamabad
♦ Prime Minister: Imran Khan
♦ President: Arif Alvi.

Amazon, Apple & Alibaba are the most disruptive companies: KPMG Report
On October 30, 2019, KPMG, a global network of professional services firm, released a report titled “Disruptive companies and business models”, in which it stated that Amazon, Apple & Alibaba are the most disruptive companies. More than 740 technology industry business leaders were surveyed globally.
Key Points:
i.Along with the top 3 companies, DJI, Google, Netflix, Airbnb, Microsoft, Facebook, and Baidu made into the Top 10.
ii.E-commerce platforms were ranked first in the list of most-disruptive business models over the next 3 years, followed by social networking.
iii.Global e-commerce spending is expected to increase from US$3.5 trillion in 2019 to $6.5 trillion in 2023.
iv.Among tech business leaders, Google Chief Executive Officer (CEO) Sundar Pichai topped the list, followed by Tesla and SpaceX CEO Elon Musk…..Click Here To Read More

IAEA appoints Argentine Rafael Grossi as its new director-general
On October 30, 2019, Rafael Mariano Grossi (58) of Argentina has been appointed as the new Director-General of the International Atomic Energy Agency (IAEA) , an international organization that seeks to promote the peaceful use of nuclear energy and to inhibit its use for any military purpose, including nuclear weapons. Grossi has been appointed for a term of 4 years and assumes office from December 3, 2019. He will be the 6th head of IAEA since it was founded in 1957.
Key points:
i.Expert in matters of security, disarmament and nuclear non-proliferation, Grossi replaces the Japanese diplomat Yukiya Amano, who died in July 2019, and who was running the UN (United Nations) agency since 2009. After his demise, Cornel Feruta is serving as the acting Director General.
ii.Born in Buenos Aires, Argentina in 1961, Grossi has a degree in Political Science, specialized in history and international relations, and has training in nuclear technologies, science and applications.
iii.Grossi currently serves as Argentina’s ambassador to the IAEA, Austria, Slovenia, Slovakia, and will chair the 2020 Review Conference of the Parties to the Treaty on the Non-Proliferation of Nuclear Weapons at the UN headquarters in New York from April – May 2020.
About IAEA:
Headquarters:Vienna, Austria
Membership:171 Member States
About Argentina:
Capital: Buenos Aires
Currency: Argentine peso
President: Alberto Fernández 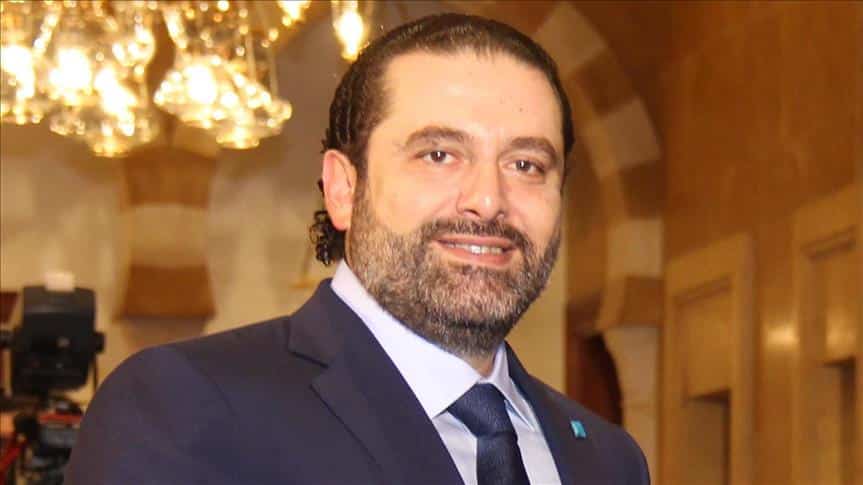 Key Points:
i.The resignation of Saad al-Hariri is expected to lead to a further turmoil in the country’s economy as Lebanon is already facing a fiscal crisis having one of the highest debt ratios in the world, $86 billion, which is 150% more than the country’s Gross Domestic Product(GDP).
About Lebanon:
Capital- Beirut
Currency- Lebanese pound
President- Michel Aoun

Researchers from IIIT Hyderabad created first-ever Indian Brain atlas
On October 28, 2019 researchers from the International Institute of Information Technology Hyderabad(IIIT-H), Telangana have created the first-ever ‘Indian brain atlas’(IBA). As per their research, the average Indian brain is smaller when compared with western and eastern countries like China, Korea etc. The Indian brain atlas was constructed in collaboration with the Department of Imaging Sciences and Interventional Radiology, Sree Chitra Tirunal Institute for Medical Sciences and Technology (SCTIMST), Thiruvananthapuram, Kerala.
Key Points:
i. The research team was led by Jayanthi Sivaswamy, professor from the Centre for Visual Information Technology (CVIT), IITH.
ii.First digital human brain atlas: The first digital human brain atlas was created in Montreal Neurological Institute (MNI) and International Consortium for Brain Mapping (ICBM) in 1993. This atlas has been widely used as standard studying neuroscience. The brain atlas previous to that was the Talairach and Tournoux atlas in 1967.
About Telangana:
Capital-  Hyderabad.
Chief minister- K. Chandrashekar Rao.
Governor- Tamilisai Soundararajan.

US-based MIT researchers developed “faradaic electro-swing reactive adsorption system” to capture carbon dioxide from air
The researchers from the Massachusetts Institute of Technology (MIT), United States (US) have developed a new technology named ” faradaic electro-swing reactive adsorption system” to capture carbon dioxide (CO2) from a stream of air. This study was published in the journal Energy and Environmental Science. The authors of the study are Sahag Voskian and T. Alan Hatton.
Key Points:
i.The new system can work on the gas at any concentration level, even down to the roughly 400 parts per million currently found in the atmosphere.
ii.The technique is based on passing air through a stack of charged electrochemical plates.
iii. The electrodes are coated with a compound called polyanthraquinone compounded with carbon nanotubes.

New argentine fish named “Glossanodon macrocephalus” discovered in Kerala waters
On October 29, 2019 researcher team from Zoological Survey of India(ZSI), led by Bineesh K.K., discovered a new deep-sea fish Glossanodon macrocephalus (common name Kerala argentine) in the Arabian Sea, off the southwestern coast of India, Kerala. The fish which belongs to family Argentinidae of the genus Glossanodon is whitish with the silvery body. The discovery of this fish species is published in the journal ‘zootaxa’.

Key Points:
i.The fish is usually found in muddy bottoms at depths 300-600mts. It is the first time that the family has been reported from India.
About Kerala:
Capital- Thiruvananthapuram.
Chief Minister- Pinarayi Vijayan.
Governor- Arif Mohammad Khan.

ICC bans Bangladesh captain Shakib Al Hasan for 2 years over corrupt approaches
On October 30, 2019, Global governing body of cricket, the International Cricket Council (ICC) has banned Bangladesh cricket team’s star all-rounder and its Test and T20 (Twenty-20) captain Shakib Al Hasan (32) for 2 years. Shakib was accused of being approached by bookies during the tri-series (Bangladesh, Sri Lanka, and Zimbabwe) 2018 and IPL (Indian Premier League) 2018 in January 2018 but he did not fully convey the ICC’s anti-corruption unit (ACU).
Key points:
i.Shakib accepted 3 allegations of violation of the ICC Anti Corruption Code (Article 2.4.4 – Failure to disclose to the ACU full details of any approaches he received to engage in Corrupt Conduct).
ii.He has been imposed with a full one-year ban & a 12-month suspended ban. He will be able to return to cricket on 29 October 2020.
About ICC:
Motto :Cricket for good
Formation :15 June 1909
Chairman: Shashank Manohar
CEO: Manu Sawhney

First female UN refugee chief Sadako Ogata passed away at the age of  92
On October 22, 2019 the first woman, the first Japanese person, and the first academic as United Nations High Commissioner for Refugees (UNHCR), Sadako Ogata passed away at the age of 92 in Tokyo, Japan. She served as the 8th Chief of the UN refugees from 1991-2000. She had also served as the head of the Japan International Cooperation Agency (JICA) from 2003- 2012 and also as the chairman of the United Nations Children’s Fund (UNICEF) from 1978-1979.
Key Points:
i.Born on 16 September 1927 in Tokyo, Ogata was the first Japanese woman to represent the country at UN (United Nations) in 1976 before becoming the chief of the UN refugees. She is also the author of book “The Turbulent Decade — Confronting the Refugee Crises of the 1990s”.
About Japan:
Capital-Tokyo.
Currency- Japanese yen.
Prime Minister(PM)- Shinzō Abe. 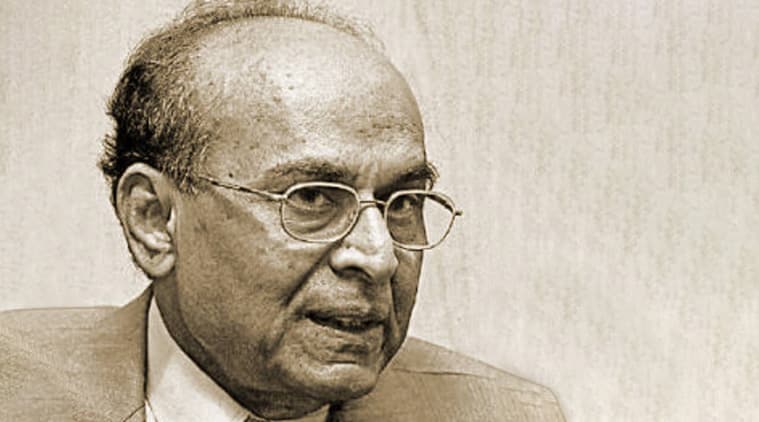 i.He had served as Karnataka Lokayukta (July 3, 2001 to July 2, 2006), head of Unlawful Activities (Prevention) Tribunal under the Unlawful Activities (Prevention) Act, 1967 during 1990, Acting Chief Justice, Karnataka High Court (1992) and a judge of the Supreme Court (July 1, 1992- July 1995).
ii.He was known for bringing to light the existence of Karnataka’s autonomous anti-corruption wing as the Lokayukta.

Nabaneeta Sen’s last book “Phoenix” released in English as “The Parrot Green Saree”
On October 29, 2019, the last novel of Bengali writer Nabaneeta Sen‘s Naxal trilogy, “Phoenix” has been translated and released in English. The book is titled as “The Parrot Green Saree” in english. The book portrays the story of two women, two generations and two worlds having different expectations and desires. The book which is translated by Tutun Mukherjee, has been published by Niyogi Books. 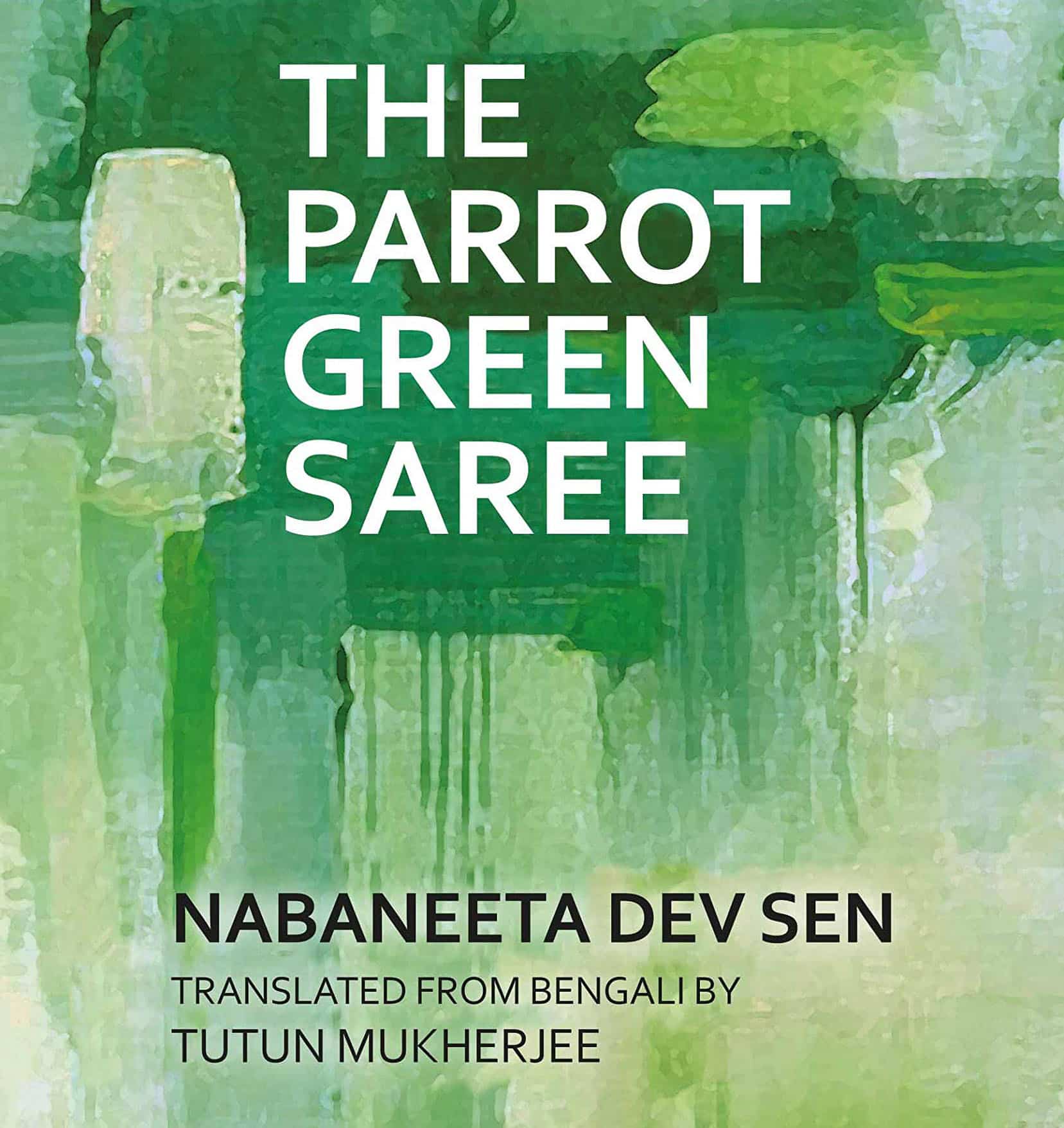 Key Points:
i.The two novels that preceded the ‘parrot green saree’ was “I, Anupam” and “In a Foreign Land, By Chance”.

Tamil Nadu becomes the first state in India to enact law on contract farming
On October 29, 2019, President of India, Ram Nath Kovind has approved the Tamil Nadu Agricultural Produce and Livestock Contract Farming and Services (Promotion and Facilitation) Act, 2019, which aims to set a policy framework and institutional mechanism on agricultural produce and livestock contract farming. With the act accepted, Tamil Nadu (TN) becomes the first state in India to enact the law on contract farming.
Key points:
i.The bill 2019 regarding this act, adopted by the Tamil Nadu State government in February 2019, is first-of-its-kind legislation that safeguards the interests of farmers during times of bumper harvest or fluctuating market prices.
ii.Marginal farmers would be paid at a predetermined price, which had been occured at the time of signing agreements, registered with deputed officers from the Department of Agricultural Marketing and Agri-Business, with buyers.
iii.In order to make suggestions to the TN government for promotion and better performance of contract farming practices, a 6-member body, named the Tamil Nadu State Contract Farming and Services (Promotion and Facilitation) Authority will be formed.
Contract farming:
It involves agricultural production being carried out on the basis of an agreement between the buyer and farm producers. In addition to poultry, there was contract farming of sugarcane and herbs. But, there was no law to ensure the welfare of the farmers involved in it, until now.
About Tamil Nadu:
Capital: Chennai
Governor: Banwarilal Purohit
Chief Minister: Edappadi K. Palaniswami
National Parks: Guindy National Park ,Gulf of Mannar Marine National Park ,Indira Gandhi (Annamalai) National Park ,Mudumalai National Park ,Mukurthi National Park.
Wildlife Sanctuaries: Cauvery North WLS , Chitrangudi Bird WLS , Indira Gandhi (Annamalai) WLS, Kalakad WLS ,Kanyakumari WLS ,Karaivetti WLS.

Former Rajasthan home minister Digvijay Singh passed away at 86
On October 28, 2019, the former home minister of Rajasthan, Shri Digvijay Singh passed away at the age of 86 in Jaipur due to illness. Born on April 23, 1933, in Uniara village, Tonk district of Rajasthan, he served as a Member of the Legislative Assembly(MLA) 6 times from the Uniara and Deoli (both of Rajasthan) assembly seats.
About Rajasthan:
Capital-Jaipur
Governor- Kalraj Mishra.
Chief Minister(CM)- Ashok Gehlot.
Temples- Birla Mandir, Karni temple, Ranakpur Jain temple.