Our Current Affairs December 2019 events will help you to get more marks in Banking, Insurance, SSC, Railways, UPSC, CLAT and all State Government Exams. Also try our Latest Current Affairs Quiz and Monthly Current Affairs PDF which will be a pedestrian to crack your exams. 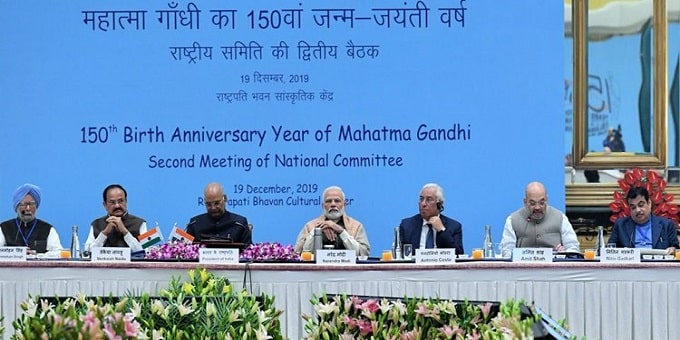 On December 19, 2019 the President of India Shri Ram Nath Kovind presided the 2nd meeting of National Committee for Commemoration of the 150th Birth anniversary (October 2) of Mahatma Gandhi ‘[email protected]’ which was held in New Delhi.

External affairs ministry relaxed guidelines for reissuing of OCI card
On December 19, 2019 the Ministry of External Affairs(MEA), relaxed certain guidelines for Overseas Citizenship of India (OCI). The relaxation is for reissuing of passport for those people aged below 20 years and those aged above 50 years. The relaxation which is temporary has been granted till June 30, 2020.

On December 20, 2019 Prof. Krishnasamy VijayRaghavan, Principal Scientific Adviser to the Govt of India launched a national program called “EChO Network” in New Delhi. The EChO network provides a template for cross-disciplinary leadership in India. The purpose of this programme is to bring citizens, govt etc to solve problems in the areas of research knowledge, and awareness of Indian ecology and the environment. 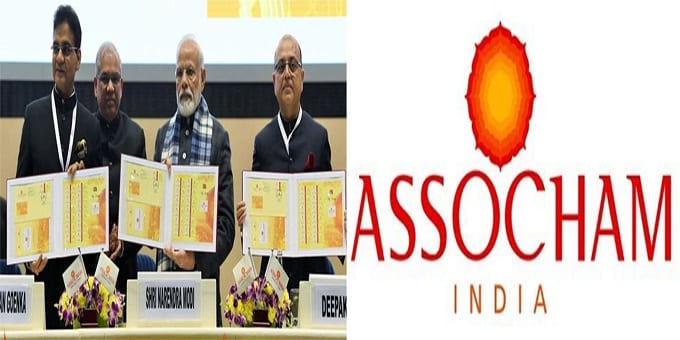 On 20 December 2019, PM Modi addressed the annual meeting of the Associated Chambers of Commerce and Industry of India (ASSOCHAM) in New Delhi. This is to celebrate the 100 years of ASSOCHAM.
Theme:  New India Aspiring for 5 trillion USD
PM target’s to achieve 5 Trillion Dollar Economy – To achieve 5 Trillion Dollar Economy by 2024 it is required to boost digital transactions of GST. Also, the corporate tax was the lowest ever since this time which will enhance the economic growth in the country. He also spoke about the Labor Reforms and sweeping reforms in the Banking Sector to make it more transparent and profitable. The government would invest 100 Lakh Crore Rupees in the infrastructural sector and another 25 Lakh Crore Rupees in the Rural Sector in order to achieve the target.
About ASSOCHAM:
Founded- 1921
Headquarters- New Delhi
President- Balkrishan Goenka

2nd follow-up committee meet by India, Afghan & Iran on Chabahar pact held in New Delhi
On December 20, 2019, the 2nd meeting of the Follow-up Committee for implementing trilateral Chabahar Agreement between India, Afghanistan and Iran was held in New Delhi. The meeting was held at the level of Joint Secretary/ Director-General.
Agreement to include Mormugoa and New Mangalore Port from India:
During the meeting, it was agreed to include Mormugao(Goa) and New Mangalore Port(Karnataka) from India in addition to JNPT (Jawaharlal Nehru Port Trust), Mundra(Gujarat), Kandla(Gujarat) and Cochin(Kerala) ports as part of designated route under the Chabahar Agreement.
i.3rd followup meeting: The 3rd followup committee meeting was decided to be conducted in India in the 1st half of 2020 followed by 2nd Coordination Council meeting….Click here to Read More

AP topped in organizing Fit India School Week; above 21,000 schools received FIT India flag
On December 20, 2019 Andhra Pradesh(AP) topped the list for organising Fit India Week in schools. So far, AP has organised the Fit India Week in 13,839 schools. AP was followed by Karnataka and Uttar Pradesh ranked 2nd & 3rd by organising the programme in 1,967 and 1,504 schools respectively. Overall the programme was organised in 26,845 schools.
FIT India flag:
21,344 schools obtained the Fit India Flag. Again AP topped the list obtaining 8,117 flags. It was followed by Karnataka in the second rank.
Key Points:
i.FIT India movement: The movement was launched by Prime Minister(PM) Narendra Modi in August 29, 2019.  On November 24 2019, in popular radio show Mann Ki Baat, the PM urged students to celebrate the Fit India week observed in 1st week of December and also to get enrolled in Fit India Star Rankings.
ii.Fit India School Ranking: It is the 1st-ever fitness rating for schools introduced in India. Schools are given 5-star & 3-star rating based on fitness levels of students. Obtaining FIT India Flag is precondition for getting FIT India school ranking. click here to know more.

2nd National Conference on Uniformed Women in Prisons Administration held at Madhya Pradesh
The Second National Conference on Uniformed Women in Prisons Administration was held at Central Academy for Police Training on 19-20 December 2019 in Bhopal, Madhya Pradesh. The conference was inaugurated by the Union Minister of State for Home Nityanand Rai.
The Madhya Pradesh Jail Department along with the Bureau of Police Research and Development (BPR&D) of New Delhi organized the conference.
Key points:
i.The first conference was held in New Delhi in 2017.
ii.30% of reservation in government services has been given to the women in Madhya Pradesh.
iii.To strengthen the women officers and employees mentally and socially, programs were held to balance work and family life.

In a first, RBI brings US-style ‘operation twist’ to reduce long-term interest rates
On December 20, 2019, India’s central bank, the Reserve Bank of India (RBI) has decided to conduct simultaneous sale and purchase of government bonds under the Open Market Operations (OMO) mechanism, a concept similar to “Operation Twist” that was last adopted by the US (United States) Federal Reserve in 2013.
So, the RBI will buy bonds worth Rs 10,000 crore of 6.45% maturing in the year 2029 and issuing bonds worth Rs 10,000 crore maturing in the year 2020.
i.This decision will reduce interest rates on long-term bonds & improve the liquidity position in the market. Currently, the difference between the repo rate and the interest rate payable on long-term bonds is around 1.50 % (or 150 bps -basis points)….Click here to Read More

Archaeologist R. Nagaswamy was honoured at the Silver Jubilee International Conference of Art in Dhaka 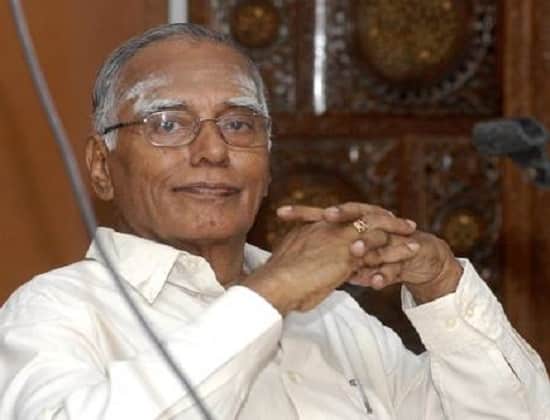 Archaeologist R. Nagaswamy was honoured at the Silver Jubilee International Conference of Art in Dhaka by Bangladesh culture minister K.M.Khalid for his contribution to art, archaeology, history and culture.
About R.Nagaswamy: 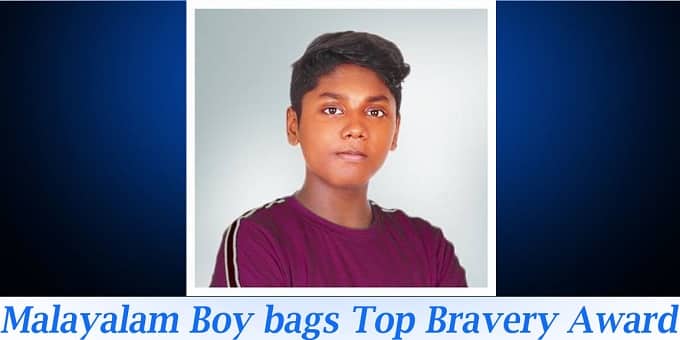 On December 20, 2019 the Bharat award for bravery was announced. Aditya K. of Ramanattukara, Kozhikode, Kerala became the first child from the State to receive the highest honour award for bravery, the Bharat award. He was awarded for saving 20 people from a burning bus on the move. The awards will be presented by Prime Minister Shri Narendra Modi at the Republic Day event in New Delhi on January 26,2020.
Key Points:
i.Other children who won the bravery award from Kerala include 16 year old Muhammed Mohsin (awarded posthumously) for saving lives of 3 children and Fatah for rescuing a woman and a girl from an approaching train. Both Belong to Kozhikode, Kerala.
ii.The national bravery award is given by the Indian Council for Child Welfare (ICCW) for the brave acts done by children neglecting their own safety.1 Bharat Award,5 special awards, and 15 general awards are announced annually by ICCW.
About Kerala:
Chief Minister- Pinarayi Vijayan.
Governor- Arif Mohammad Khan.
Capital- Thiruvananthapuram.
Rivers- Cheruthoni river, Bharathapuzha river, Pamba river, Chalakudy river, Parambikulam river. 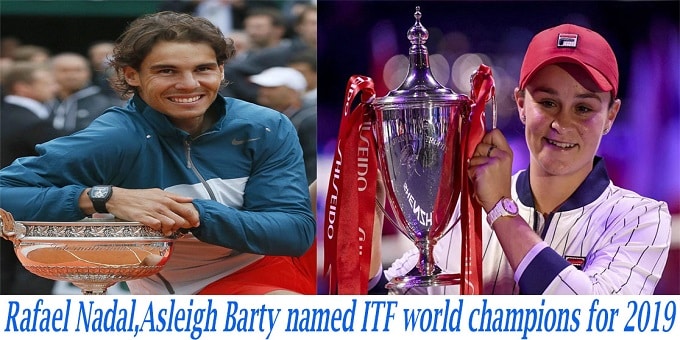 International Tennis Federation (ITF) honoured eleven players in its annual awards 2019 including Singles, Doubles, Wheelchair, and Juniors. The ITF has announced that Rafael Nadal of Spain and Ashleigh Barty of Australia have been named 2019 ITF World Champions in Singles. This award’s will be given at the 2020 ITF world champions Dinner on 2nd June, 2020 in Paris.
i.Nadal claimed the season-ending ITF world title for the fourth time after sealing an historic 12th French Open and a fourth U.S. Open, as well as helping Spain to their sixth Davis Cup title.
ii.The 23-year-old  Ashleigh Barty is the first Australian to be named ITF Women’s World Champion having become the first Australian woman to reach No.1 in the world rankings since Evonne Goolagong Cawley in 1976. Barty also lifted the season-ending WTA Finals trophy and led Australia to their first Fed Cup final since 1993.
WINNERS OF THE EVENT 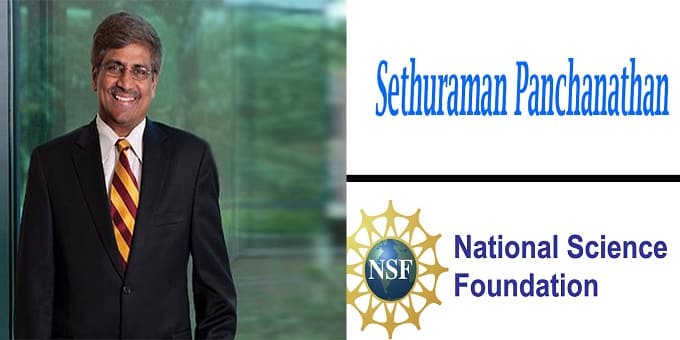 On December 20, 2019, The United States (US) President Donald Trump has chosen Indian-American computer scientist, Sethuraman Panchanathan (58) as director of the National Science Foundation (NSF) of America.
He will succeed France Anne-Dominic Cordova, who retires in 2020 after completing her 6-year term as director of the institution.
Key Points:
i.Dr. Sethuraman has taken on new responsibilities with research, innovation, academic administration and policy experience.
ii.He is currently serving as the Executive Vice President and Chief Research and Innovation Officer at Arizona State University (ASU). He is also the founding director of the ‘Center for Cognitive Ubiquitous Computing’ at ASU. Panchanathan is also the Vice President of the National Academy of Inventors (NAI) in the US.
About National Science Foundation (NSF):
Formation– May 10, 1950
Headquarters– Virginia, U.S
Motto– Where Discoveries Begin
This body assisting research in all non-medical fields including science and engineering. Its medical counterpart, National Institute of Health (NIH) is a separate institution to work in the field of medicine.

Ethiopia Launches First Satellite Named ETRSS-1 from China
On December 20, 2019, The Ethiopian Remote Sensing Satellite-1 or ETRSS-1, was sent into space by a Chinese Long March 4B carrier rocket (CZ-4B) from the Taiyuan Satellite Launch Center in North China.
ETRSS-1 is Africa’s 41st satellite in space and the third East African satellite. Ethiopia is now the 11th African nation to launch a satellite into space by joining the ranks of Algeria, Angola, Egypt, Ghana, Kenya, Morocco, Nigeria, Rwanda, South Africa and Sudan. 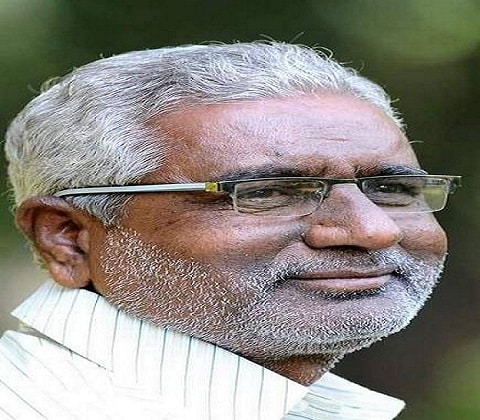 On December 19, 2019, Chandrakanth Karadalli a renowned children’s book writer died due to cardiac arrest in Bangalore at the age of 70. He was a awardee of Karnataka Rajyotsava award in 2019 and Bala Sahitya Akademi award from the union government. He also received ‘Good Teacher’ award from both State and Nation Government.
About Chandrakanth Karadalli:
i.He was a retired government primary school teacher from Shahapur in Yadgir district.
ii.His works are Nalidadu Baa Navile, Puttana Kanasu, Vichara Taranga and Manadaalada Maatugalu. 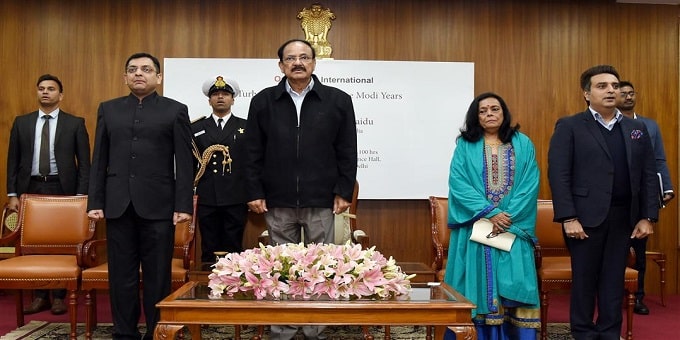 On December 20, 2019 the Vice President of India Shri Venkaiah Naidu released a book titled ‘Turbulence and Triumph: The Modi Years’ in New Delhi. The book is jointly authored by Rahul Agarwal and Bharathi S Pradhan and is published by Om Books International.
Key Points:
i.The book is about life journey of Prime Minister Shri Narendra Modi from his days as a young boy in Gujarat till becoming the Prime Minister of India.
ii.Various successive initiatives launched by the PM like Make in India, Skill India, Swachh Bharat etc was discussed. On December 20, 2019, former Shiromani Gurdwara Parbandhak Committee(SGPC) president Avtar Singh Makkar (39th president) passed away at the age of 78 in Gurugram, Haryana due to brief illness.  Avtar was the founder president of Gurdwara Sri Guru Singh Sabha, which was then a hub for Akali politics.
Key Points:
i.Born on January 3, 1943 at Sargodha (now Pakistan), Avtar was elected as president of the district Akali jatha in 2002. He contested from Ludhiana North, Punjab before being elected to SGPC in 2005.
ii.He served the position until November 4, 2016, and became the second longest-serving president of the SGPC, after Jathedar Gurcharan Singh Tohra.
iii.SGPC is an apex religious body of the Sikh community.

Kerala MLA Thomas Chandy passes away at 72
On December 20, 2019, The National Congress Party (NCP) State President and Kerala MLA, Thomas Chandy passed away due to cancer at the age of 72 at his home in Kochi, Kerala. Born in Chenammkary, Kerala in 1947, he represented the Kuttanad constituency in Alappuzha. He was closely associated with Kerala Student Union (KSU) and later with the Congress. He also built a business empire in the Persian Gulf.

Uttrakhand hosted the 11th Regional Quality Conclave
On December 20, 2019 the Quality Council of India (QCI) along with PHD Chamber of Commerce and Industry (PHDCCI) organised the 11th edition of Regional Quality Conclave (RQC) at Rudrapur,Udham Singh Nagar of Uttarakhand. The theme of the RQC was “Advance Manufacturing with Quality, Innovation & Technology Interventions. It’s objective was to create awareness about significance of quality culture in businesses.