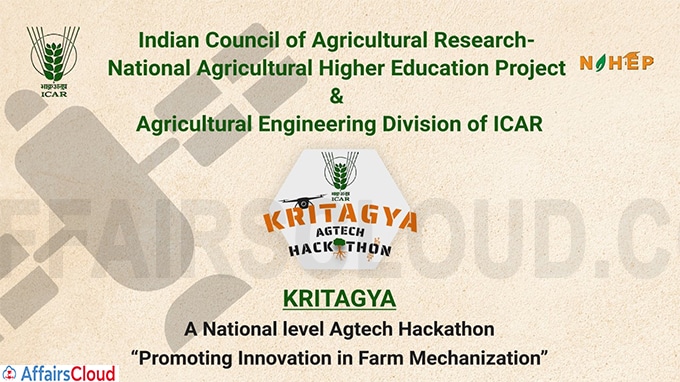 Indian Council of Agricultural Research (ICAR) announced a hackathon named “KRITAGYA” (Krishi-Taknik-Gyan) under its National Agricultural Higher Education Project (NAHEP). The national level AgTech Hackathon aims to develop and promote women friendly equipment through potential innovative technological solutions and collaboration with stakeholders to improve the farm mechanization, productivity and profitability in India.
KRITAGYA Hackathon:
KRITAGAYA Hackathon, an initiative taken by the NAHEP in partnership with the Agricultural Engineering Division of ICAR to support the learning capabilities, innovations, employment and entrepreneurial opportunities in the Farm mechanization sector.
Registrations:
Students, teachers, faculties, innovators and entrepreneurs from universities, technical institutions across India can participate and collaborate with the local startups and students of technology institutes.
A group of maximum 4 members with not more than 1 faculty and/or 1 innovator or entrepreneur can compete in this hackathon.
The registration is open from 15th September 2020 to 30th September 2020.
Benefits:
The cash award of Rs. 5 lakhs, Rs. 3 lakhs and Rs.1 lakh will be given to the winners of 1st, 2nd and 3rd prize.

On September 18, 2020 In the wake of the ongoing COVID-19 crisis, a ‘Special Report on Sustainable Recovery’ was virtually launched by Dr Fatih Birol, Executive Director of International Energy Agency (IEA) and Amitabh Kant, Chief Executive Officer (CEO) of NITI Aayog, in the presence of Piyush Goyal Union Minister of Railways and, Commerce and Industry. The report is part of IEA’s flagship World Energy Outlook series. The report was prepared in cooperation with the International Monetary Fund(IMF).

Highlights of  the Report
i.The Sustainable Recovery Plan has been set out in this report for actions to be taken over the next three years(2021-2023).Three main goals are enhance economic growth, create jobs and build more cleaner and resilient energy systems. It also sets out the policies and targeted investments for each key sector.
ii.Global Economy 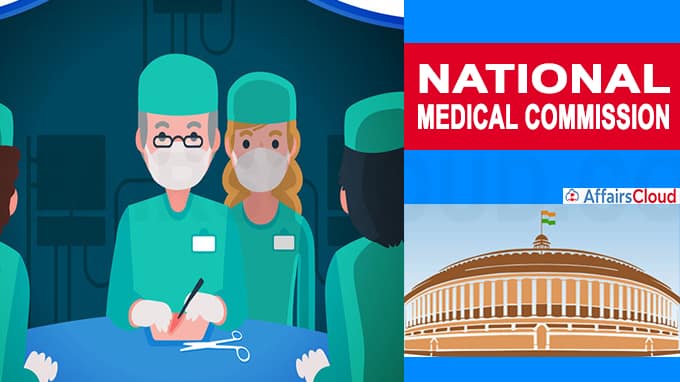 i.The Central government is trying hard to detach corruption from all sections of our society including health sector, the statutory body of which i.e. Medical Council of India (MCI) had faced corruption charges and was dissolved by the Government of India in 2018 with the Board of Governors (BoG)-MCI chaired by Dr Vinod Kumar Paul, member (health), Niti (National Institution for Transforming India) Aayog.
ii.Now in a further move, on September 25, 2020, BoG-MCI dissolved by Centre and was replaced by National Medical Commission (NMC) as India’s top regulator of medical education. The notification in this regard was issued by
iii.Along with the above, in pursuance of the provisions of sub-section (1) of the section 60 of the National Medical Commission Act, 2019 (30 of 2019), nearly 64-year-old IMC Act, 1956 (102 of 1956) has repealed w.e.f. September 25, 2020.
About Ministry of Health and Family Welfare (MoHFW):
Union Minister– Harsh Vardhan
Minister of State (MoS)– Ashwini Kumar Choubey
<<Read Full News>> 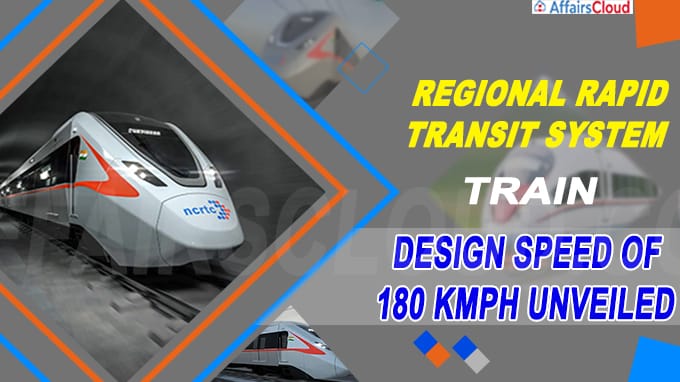 i.On September 25, 2020, the first look of India’s first RRTS (Regional Rapid Transit System) train unveiled by DurgaShanker Mishra, Secretary, Ministry of Housing and Urban Affairs (MoHUA) and Chairman, National Capital Region Transport Corporation (NCRTC) during an event. This first RRTS train will provide its services to 82 km long Delhi-Ghaziabad-Meerut RRTS in 2022 after trials.
ii.It should be noted that NCRTC is the nodal agency for executing this first RRTS project of India while the train sets are being manufactured by Bombardier Transportation India Private Limited at their Savli plant in Gujarat under the government’s Make in India policy and AtmaNirbhar Bharat Abhiyan.
iii.It will be one of the fastest RRTS in India which will reduce travel time from Meerut to Delhi to less than 60 minutes.
About NCRTC:
NCRTC is a joint venture of the Government of India (50%) and State Governments of Haryana (12.5%), NCT Delhi (12.5%), Uttar Pradesh (12.5%) and Rajasthan (12.5%).
Managing Director– Vinay Kumar Singh
About Indian Railways:
Union Minister for Railways – Piyush Vedprakash Goyal
Railway Board Chairman – Vinod Kumar Yadav
<<Read Full News>> 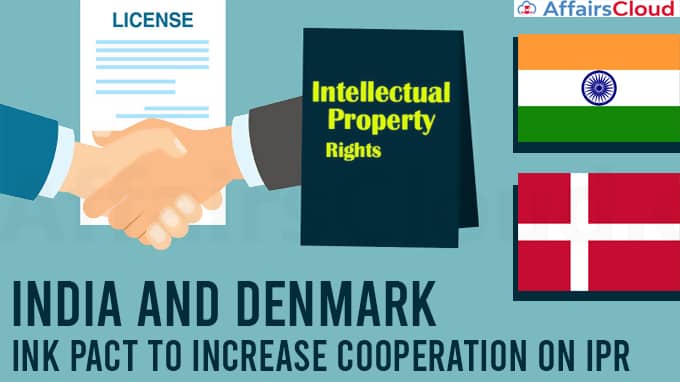 On September 26, 2020 India and Denmark signed a Memorandum of Understanding (MoU) to enhance cooperation in the area of Intellectual Property Rights (IPRs) through exchange of best practices and collaborating in training programmes. The MoU will also include ways to protect traditional knowledge.
Signing of MoU:
The MoU was signed between the Department for Promotion of Industry and Internal Trade (DPIIT) and Danish Patent and Trademark Office, Ministry of Industry, Business and Financial Affairs, Kingdom of Denmark.
About Denmark:
Prime Minister – Mette Frederiksen
Capital – Copenhagen
Currency – Krone
About Ministry of Commerce and Industry:
Union Minister – Piyush Goyal
Minister of State (MoS) – Hardeep Singh Puri, Som Parkash
<<Read Full News>> 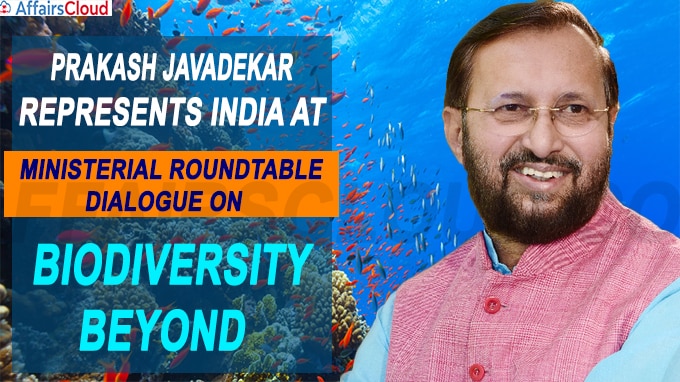 On September 24, 2020, Union Minister for Environment, Forest and Climate Change (MoEFCC), Prakash Javadekar represented India at the virtual Ministerial Roundtable Dialogue on Biodiversity Beyond 2020. The meeting was held to exchange views Biodiversity Conservation and Sustainable Development. The meeting was hosted by China.
i.The Dialogue was conducted on the topic of Biodiversity Beyond 2020: Building a Shared Future for All Life on Earth.
About United Nations Environment Programme (UNEP):
Executive Director – Inger Andersen
Headquarters – Nairobi, Kenya
<<Read Full News>> 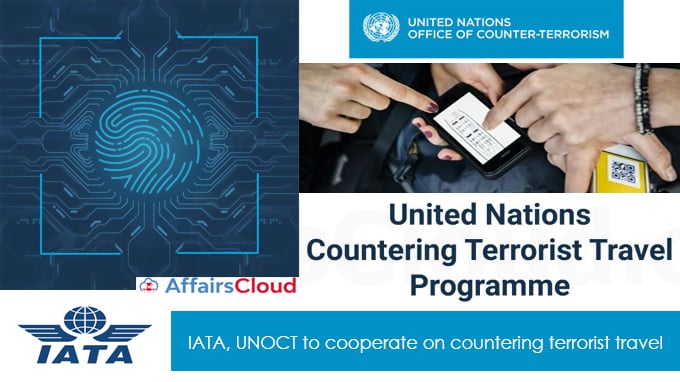 i.Around the world, there are many counter-terrorism operations going on to provide security and to proliferate peace. Some of these operations are not only limited to governments but include representatives of the private sector.
ii.Among one of these, there is International Air Transport Association (IATA) which has signed a memorandum of understanding (MoU) with the United Nations Office of Counter-Terrorism (UNOCT) on September 24, 2020 as the first non-government partner to strengthen the cooperation with the United Nations (UN) Countering Terrorist Travel Programme (CT Travel Programme).
About International Air Transport Association (IATA):
It is a trade association of the world’s airlines representing some 290 airlines or 82% of total air traffic.
Headquarter– Montreal, Canada
Headquarter (India)–  Mumbai, Maharashtra
About United Nations (UN):
Secretary General– Antonio Manuel de Oliveira Guterres
Headquarter– New York, United States
<<Read Full News>> 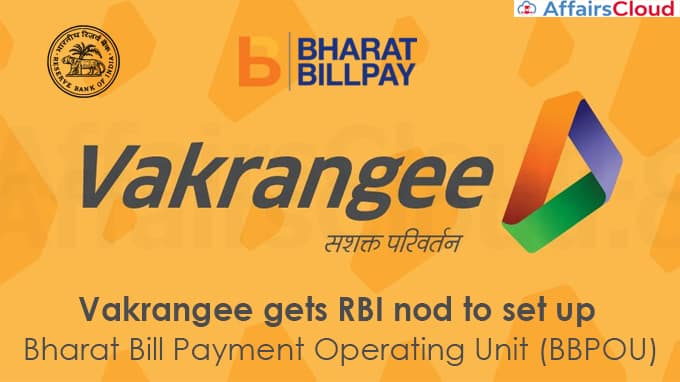 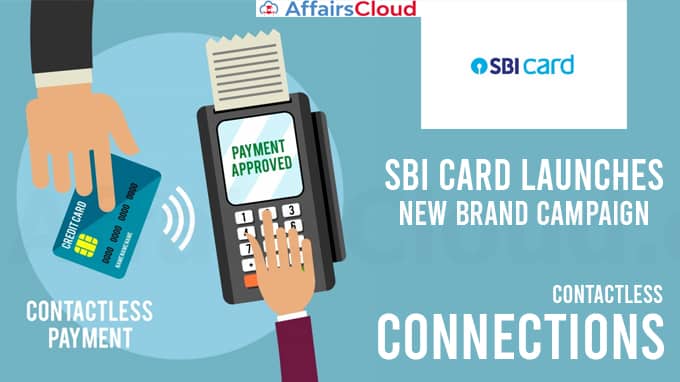 On September 25, 2020 SBI Card(legally- SBI Cards and Payment Services Limited) launched ‘Contactless Connections’, a new brand campaign. The campaign spreads the message that sharing of love and care is possible even during this difficult period(COVID-19) where social distancing is the norm. This campaign is in continuation of the SBI card’s brand campaign  “Ghar Mein Khushiyaan”.
About Contactless Connections
The campaign seeks to bring a new breath of positivity by demonstrating that people can connect emotionally and spread joy, despite the social distancing practices to which we are bound.
About Ghar mein Khushiyaan
The brand film aims to touch a passion with the audience by giving them new hope and encouraging them to fulfill their unfulfilled wishes with their loved ones.
Recent launches & Collaborations of SBI Card
i.Indian Railway Catering and Tourism Corporation Limited(IRCTC) and SBI Card launched a Co-branded Contactless Credit Card on RuPay Platform to reward the frequent railway(train) travellers.
ii.SBI Card Collaborated with Google to enable Customers to use their SBI Credit Cards to make card payments using the Google Pay app on their Android smartphones.
About SBI Cards and Payment Services Limited(SBI Card):
Headquarters– Gurgaon, Haryana.
Managing Director(MD) and Chief Executive Officer(CEO)–  Ashwini Kumar Tewari(Succeeded Hardayal Prasad) 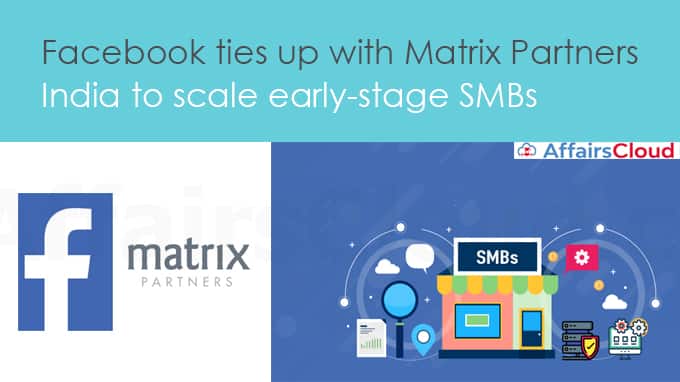 On September 24, 2020 Facebook announced that it has associated with  early-stage Venture Capital(VC) fund Matrix Partners India to scale small businesses in India by providing them with digital skilling support. The partnership with Matrix Partners is a part of Facebook’s VC Brand Incubator Programme, that associates with VC funds to help early-stage Small and Medium Businesses (SMBs) to increase their digital potential.
VC Brand Incubator Programme
i.The programme with the tie-up with Matrix Partners India has completed 1 year during which has collaborated with 6 VC funds namely, Sauce VC, Fireside Ventures, SAIF Partners, Sequoia Capital, DSG Ventures including Matrix Partners India.
ii.During the period, the programme has mentored more than 150 brands at various stages of their growth journey.
iii.Over 20 companies from the portfolio of Matrix Partners India including Country Delight, Stanza Living, OZiva, etc.,  have partnered with Facebook on this program.
Note– As part of the Program, Facebook has started a Campaign Lab that helps direct-to-consumer small businesses to get creative solutioning support, and go live with mobile friendly creatives and strategy within 72 hours.
Additional Info 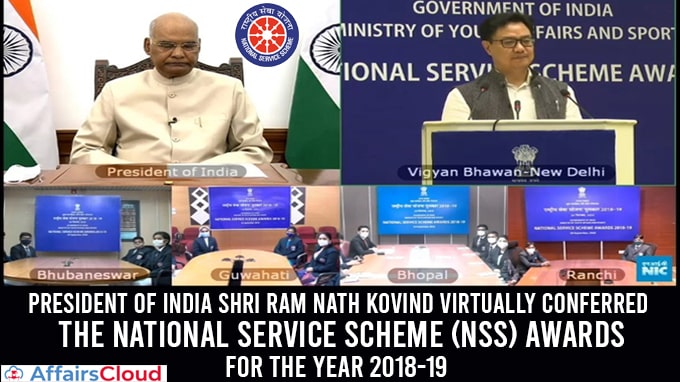 Gurpreet Singh Sandhu, (28 years) from Chandigarh, goalkeeper of Indian National Men’s Football team and Sanju Yadav (22 years) from Haryana, Midfielder of India’s National Women’s Football team were declared as the winners of the annual All India Football Federation (AIFF) Men’s Footballer of the Year Award 2019-2020 and AIFF Women’s Footballer of the Year Award 2019-2020 respectively.
Selection process:
i.Gurpreet Singh Sandhu was selected as the winners based on the votes of the coaches of Hero I-League club and Hero Indian Super league.
ii.In consultation with Isac Doru, Director of AIFF, Maymol Rocky, Head coach of Women’s National team selected Sanju as the winner.
Other 2019-2020 AIFF Awards:

Key Points:
i.Gurpreet Singh Sandhu became the 2nd goalkeeper to win the award after Subrata Paul in 2009.
ii.He was the recipient of the 2019 Arjuna Award which made him the 26th Footballer to receive the Arjuna award.
iii.Sanju plays as a forward for both Indian Women’s Football team and Gokulam Kerala in Indian Women’s league. 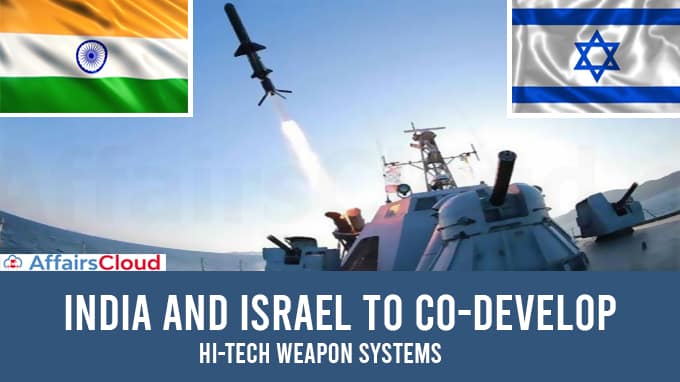 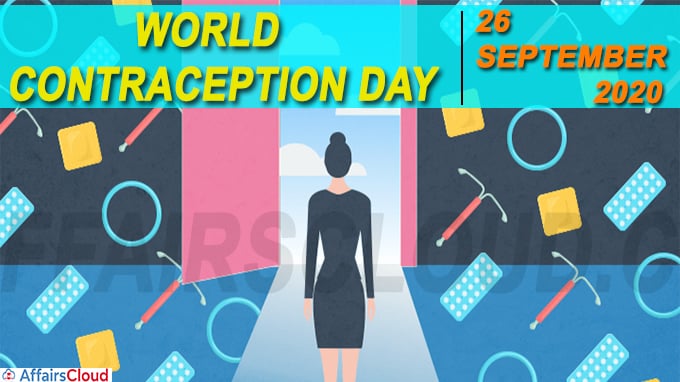 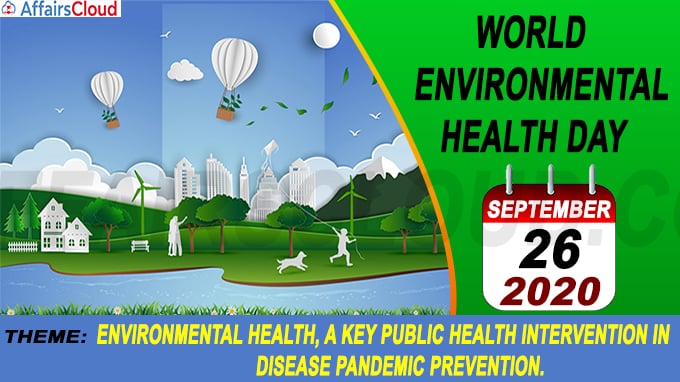 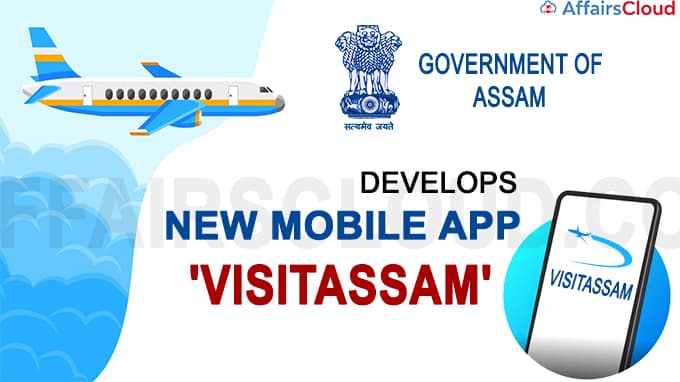 i.On 25th September 2020, The Government of Assam developed a mobile app named “Visitassam” which enables the air passengers to download forms and fill it which can be used at the airports to reduce the time on the formalities for COVID-19 tests and ensures the proper social distancing norms.
ii.The government also introduced a change of protocol for the air passengers to take the “Tatkal RT-PCR” test with a payment of Rs.2200 whose result will be given within 24 hours.
iii.The Government has also relaxed their quarantine rules for both rail and air travelers from other states after their recovery from infection.
About Assam:
Stadiums– Barsapara Cricket Stadium, Nehru Stadium, Indira Gandhi Athletic Stadium, Jorhat Stadium, Satindra Mohan Dev Stadium
Dance– Bihu, Satriya Nritya(classical), Barpeta’s Bhortal Nritya, Deodhani, Bagurumba, Tea Folk’s Jhumur Dance.
<<Read Full News>>

On September 20, 2020 The Airport Council International(ACI), a worldwide association for the air transport industry, granted GMR Group-led Rajiv Gandhi International Airport located at Hyderabad, Telangana, the Airport Health Accreditation (AHA) for the safety measures being taken at the aerodrome. The airport is among the 1st airports in the Asia Pacific region to have received this accreditation.

Union Minister for Chemicals & Fertilizers Sadananda Gowda announced a scheme for setting up 10 Plastics Parks throughout the country. The Department of Chemicals and Petrochemicals has already given final approval in the states of Assam, Madhya Pradesh (2 parks), Odisha, Tamil Nadu and Jharkhand. The Central government will provide funds upto 50% of the project cost (ceiling of Rs. 40 Crore per project) and remaining will be funded by State Government and beneficiary industries. The plastic parks will provide a common facility to consolidate and increase the capacities of the domestic plastic processing industry.

Over a virtual platform Capt Amarinder Singh, Chief Minister of Punjab launched the Smart Ration Card Scheme to cover 1.41 crore beneficiaries of National Food Security Act(NFSA) across Punjab. He also announced a state funded scheme to provide ration to 9 lakh beneficiaries who are not covered under NFSA. These schemes will end the exploitation of beneficiaries by ration depot holders and enable them to get their ration from any depot across the state.