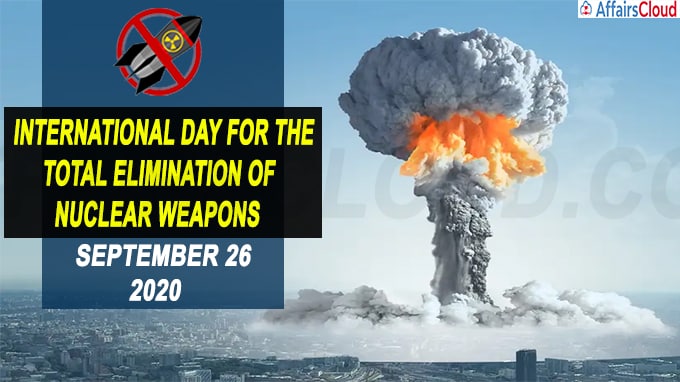 United Nations(UNs) International Day for the Total Elimination of Nuclear Weapons is annually observed across the globe on 26th September to provide an opportunity for the global communities to reaffirm and priorities their commitment to the global nuclear disarmament.

The first International Day for the Total Elimination of Nuclear Weapons was first celebrated on 26th September 2014.

i.The United Nations General Assembly in its resolution A/RES/68/32 on December 2013 proclaimed 26th September as the International Day for the Total Elimination of Nuclear Weapons following the high level meeting of the UNGA on nuclear disarmament on 26th September 2013 in New York, United States of America.

ii.This resolution prohibits the possession, development, production, acquisition, testing, stockpiling, transfer and use or threat of use of the Nuclear weapons.

Efforts of UN for Nuclear Disarmament:

i.The UN adopted the treaty on the Prohibition of Nuclear Weapons on 7th July 2017.

ii.António Guterres, Secretary General of UN launched “Securing Our Common Future: An Agenda for Disarmament” an agenda to eliminate the nuclear weapons under the disarmament to save humanity framework.

i.The Reduction and Limitation of Strategic Offensive Arms Treaty (START I), which prohibits the possession of Nuclear Weapons and Ballistic Missiles was signed by the United States of America and Union of Soviet Socialist Republic on 31st July 1991.

ii.Under START I Belarus, Kazakhstan and Ukraine voluntarily renounced the nuclear weapons in their possession in 1995.

iii.The new START was signed between the USA and Russian Federation in 2010 expires in February 2021.

Despite the efforts of the United Nations, more than 13400 nuclear weapons exist around the world.