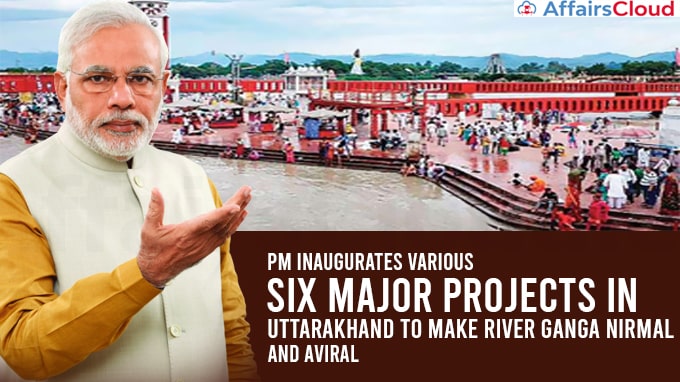 iii.He inaugurated Six STPs which are located in different parts of the state such as Haridwar, Rishikesh and Badrinath.

iv.The Inauguration of STP assumes importance as the Haridwar-Rishikesh zone contributes about 80% waste-water load of Uttarakhand into River Ganga.

v.The 7.5 MLD Plant in Chandreshwar Nagar which was inaugurated will be the First Four Storied STP in the country.

The mission not only aims at the cleanliness of the River Ganga, but also focuses on all round development of the river.

The Government is following Four pronged plan to achieve its objective, it includes

ii.It has been established by the National Mission for Clean Ganga (NMCG), which is the nodal body to implement the ‘Namami Gange’ Programme along with Wildlife Institute of India (WII).

iii.It will showcase the culture, biodiversity and rejuvenation activities in River Ganga.

iv.It will help the pilgrims to understand the heritage associated with River Ganga.

‘Rowing down the Ganges’

i.PM Modi released a book ‘Rowing down the Ganges’, it is co-published by NMCG & WII.

ii.It conceptualizes the story of Ganga, as what one would see when rowing from Gaumukh (origin) to Ganga Sagar (End point before it enters sea).

ii.He introduced ‘Margdarshika for Gram Panchayats and Paani samities under Jal Jeevan Mission’ (Guidelines for Village Panchayats and Water Committees) during the event.

PM announced a special 100-day campaign to be launched from October 2, 2020 under Jal Jeevan Mission to ensure drinking water connection to every school and Anganwadi.

i.On May 28, 2020, Uttarakhand Chief Minister (CM) Trivendra Singh Rawat, launched the scheme named “Mukhyamantri Swarozgar Yojana” to retain the migrants who have returned to the state during the lockdown.