The Indian Navy conducts a ‘Maritime Partnership Exercise’ with the Philippines Navy in the West Philippine Sea at the South China Sea region on 23rd August 2021. Lockheed Martin, US based Company has received USD 328 Million worth Contract from the Indian Government to provide comprehensive support for the Indian Air Force (IAF) fleet of 12C-130J-30 Super Hercules Aircraft for a period of 5 years. 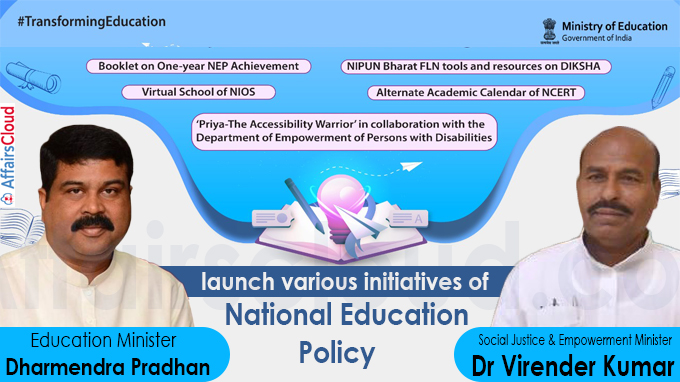 Virtual School of NIOS, a first of its kind Initiative
i.The School is a 1st of its kind Initiative in India for providing advanced digital learning platforms through Virtual live classrooms & Virtual labs
Priya-The Accessibility Warrior
i.Government’s commitment to promote accessibility led to the development of the E-Comic cum Activity Book, titled – ‘Priya- The Accessibility Warrior’.A girl named Priya who met an accident and could not walk, due to plastered leg. The story depicts how Priya managed to participate in all activities at school, and in the process learnt the importance of the accessibility.
ii.It is developed jointly by the Department of Empowerment of Persons with Disabilities (Divyangjan), Ministry of Social Justice and Empowerment and Department of School Education and Literacy.
About NIPUN Bharat Mission
It aims to ensure that every child in India attains foundational literacy and numeracy by the end of Grade 3, by 2026-27.
i.Purpose – To cover the learning needs of children in the age group of 3-9 years.
About Ministry of Education
Union Minister – Dharmendra Pradhan (Rajya Sabha, Madhya Pradesh)
Minister of State (MoS) – Annapurna Devi Yadav(Koderma, Jharkhand)
>>Read Full News

As a part of the Nationally Determined Contributions-Transport Initiative for Asia(NDC-TIA) project, NITI Aayog and World Resources Institute(WRI), India has jointly launched the ‘Forum for Decarbonizing Transport’ in India. The forum will act as a channel to bring in the diverse needs to adopt an integrated approach for greening the transport sector in India.
Amitabh Kant, CEO of NITI Aayog inaugurated the forum over the virtual event.
Aim:
To reduce the peak level of GHG emission (transport sector) in Asia (in line with a well below 2-degree pathway).
About NDC TIA:
NDC-Transport Initiative for Asia(NDC-TIA), a part of the International Climate Initiative (IKI) is a joint programme of 7 organisations that engages China, India and Vietnam over the period 2020-2024.
About Niti Aayog:
CEO– Amitabh Kant
Headquarters– New Delhi
Established on– 1 January 2015
>>Read Full News 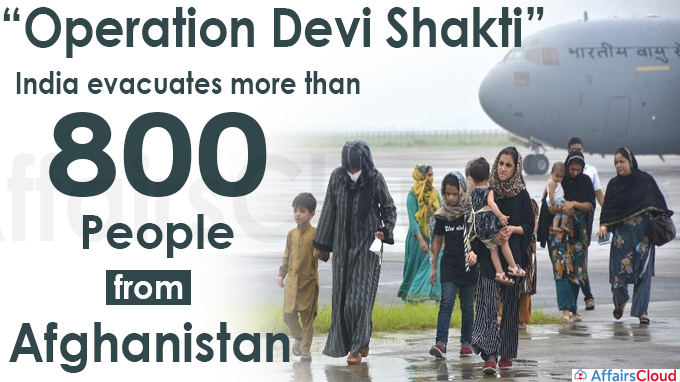 The Government of India (GoI) has launched a rescue mission named ‘Operation Devi Shakti’ to evacuate stranded Indians from the Taliban-Captured Afghanistan.

In August 2021, the Union Minister of Social Justice and Empowerment Virendra Kumar flagged off ‘Operation Blue Freedom’, a world record expedition by Divyangjans (people with disabilities) from across India to the world’s highest battlefield – Siachen Glacier (Kumar Post). In accordance with the recent technical report by the National Centre for Coastal Research (NCCR) under the Ministry of Earth Sciences, 32% of India’s coastline underwent sea erosion and 27% of it expanded in a time span of 28 years i.e. between 1990 and 2018.

Sea Erosion of coastline:
The coastline of West Bengal is the most affected as 60% of it underwent erosion during these 28 years.

Coast Expansion:
The maximum expansion was seen in the coastline of Odisha with 51%. ADB releases 52nd Edition of the Key Indicators for Asia & the Pacific, 2021 Asian Development Bank (ADB) has released the 52nd Edition of the Key Indicators for Asia & the Pacific, 2021 In August 2021, the Reserve Bank of India (RBI) released the recommendation report of the Expert Committee on Primary (Urban) Co-operative Banks (UCBs) under the chairmanship of N. S. Vishwanathan, which was constituted by RBI to review the issues of UCBs and to provide a road map for strengthening the sector.
Committee’s Recommendation:
To ease the regulatory process, the committee has recommended a 4-tier structure for the UCBs, based on their capital availability and other factors.

RBI issued Draft Regulations for Round Tripping
RBI has made changes in the existing regulation of foreign investment and released the draft rule to discourage round-tripping. In August 2021, the Securities and Exchange Board of India (SEBI) provided the in-principle approval to Bajaj Finserv Ltd for launching the mutual fund (MF) business.

Background:
i.In December 2020, SEBI has eased the MF business regulations and allowed the sponsors who do not fulfill profitability criteria at the time of making an application will also be considered to be eligible to sponsor a MF.

ii.To sponsor MF, the fintech company should have a net worth of Rs 100 crore for contribution towards the net-worth of the AMC. The AMC should maintain this networth till it has profits for 5 consecutive years.
Note – Earlier in August 2021, Samco Securities also received SEBI’s approval to launch its MF business.
About Bajaj Finserv Ltd:
Bajaj Finserv Limited is a part of Bajaj Holdings & Investments Ltd
Headquarters – Pune, Maharashtra
Chairman & Managing Director – Sanjiv Bajaj

The Reserve Bank of India(RBI) has imposed a penalty of Rs 27.5 Lakh on Dhanlaxmi Bank, Thrissur, Kerala for the violation of certain provisions of the Depositor Education and Awareness Fund Scheme.

The RBI has also imposed a penalty of Rs 20 lakh on the NE and EC Railway Employees’ Multi-State Primary Co-operative Bank, Gorakhpur, Uttar Pradesh for the violation of directions under the Supervisory Action Framework (SAF). Features of the Partnership:
i.Under this partnership, the 11 selected startups will be able to utilise Microsoft technology including Azure, GitHub, and M365, which will allow them to build and run their business.
ii.They will able to utilise Microsoft’s Azure Marketplace, enterprise sales team, and the ecosystem to develop and execute their go-to-market strategies.
Selected Startups: August 23, 2021 the Government of India had launched a new geo-spatial planning portal ‘’Yuktdhara’’ under Bhuvan. It would enable MGNREGA (Mahatma Gandhi National Rural Employment Guarantee Act) assets planning by using remote sensing and Geographic Information System (GIS) data. The portal Yuktdhara was launched by Giriraj Singh, Minister of Rural Development and Panchayati Raj.
Objective– Yuktdhara platform will serve as a repository of assets and facilitate the Gram Panchayat level planning of MGNREGA activities across India.
i.It is an initiative of Indian Space Research Organization (ISRO) along with the Ministry of Rural Development . By providing the support in rural areas for decentralized decision making using these G2G services.
ii.Dr.Jitendra Singh , a Union Minister of State (Independent Charge) for the Ministry of Science and Technology; Ministry of Earth Sciences;Ministry of State in Department of Atomic Energy and Department of Space had participated in the launching event.
About Ministry of Rural Development and Panchayati  Raj
Minister : Giriraj Singh (Begusarai, Bihar)
Minister of State(MoS): Kapil Moreshwar Patil (Bhilwandi, Maharashtra)
>>Read Full News All India Chess Federation (AICF), India’s Chess Administrative body  and the Chess Players Association of India (CPAI) has announced their Merger plan to administer the chess games in the country at a joint press conference in Lucknow, Uttar pradesh.

About All India Chess Federation (AICF)
i.Founded in 1951 at Chennai, Tamil Nadu. It is the Central Administrative body for Chess in India.
ii.AICF is affiliated to the International Chess Federation (FIDE), the World body for Chess
President – Sanjay Kapoor
About Chess Players Association of India (CPAI)
Founded in June 2004 at Kolkata, West Bengal
i.It is formed to protest a 10% cut in prize money by AICF on the chess players.
ii.CPAI protects the rights & needs of the chess players by forming as a group. The Indian duo of table tennis players  Manika Batra and G Sathiyan defeated Hungary’s Dora Madarasz and Nandor Ecseki with 3-1 in the final match of World Table Tennis (WTT) Contender 2021 which held at Budapest,capital of Hungary.With this achievement, they became the first table tennis players from India to win a WTT Contender title.

WTT Contender-
WTT Contender Series is a part of the revamped International Table Tennis Federation (ITTF) scheduled event which launched in 2021 and features two tiers of events such as WTT Star Contender and WTT Contender. The renowned writer Ajitabha Bose wrote a book ‘The Kapil Sharma Story’, a biography of the famous Indian Stand-up comedian and self-made superstar,  Kapil Sharma. The book narrates about the journey and struggling life of Kapil Sharma. 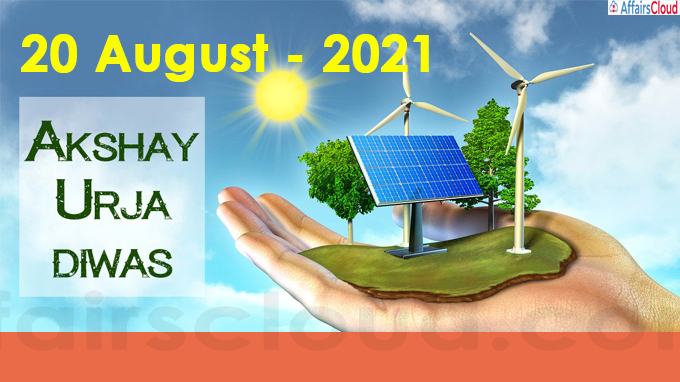 Akshay Urja Diwas also known as National Renewable Energy Day, is annually observed across India on 20th August to create awareness about the benefits of natural energies such as Biogas, Solar Energy, Wind Energy and Hydroelectric Power. The day also marks the birth anniversary of Late Prime Minister Rajiv Gandhi.
Objective:
To create mass awareness and popularization of the need, benefits and the use of renewable energy devices and systems in all aspects of life.
Background:
i.The Ministry of New and Renewable Energy(MNRE), Government of India has declared the 20th August of every year, the birth anniversary of former Prime Minister Rajiv Gandhi, as the ‘National Renewable Energy Day’.
ii.The government of India introduced the “Rajiv Gandhi Akshay Urja Diwas” Programme which is celebrated across India since 2004.
iii.The first-ever Akshay Urja Diwas was celebrated on 20th August 2004.
Commemorative stamp:
In 2004, on the first-ever Akshay Urja Diwas, former Prime Minister Dr Manmohan Singh issued a Commemorative Stamp “Rajiv Gandhi Renewable Energy Day”.
India in Renewable energy:
According to the 57th Renewable Energy Country Attractiveness Index (RECAI) by Ernst & Young Global Ltd (EY), India is the third-largest producer of renewable energy with 136 GW of total energy generated from renewable resources. World Water Week(WWWeek) is annually celebrated across the globe in the month of August to address the major water issues across the globe. The WWWeek 2021 is being held as an online event from 23rd to 27th August.
WWWeek has been an annual event organised by Stockholm International Water Institute(SIWI) since 1991.
The theme of 2021 World water Week is “Building Resilience Faster”. 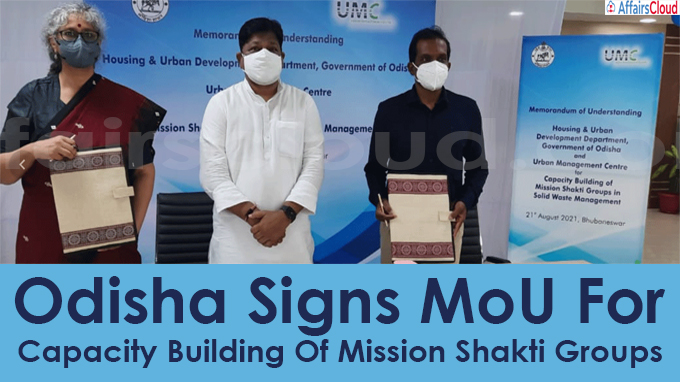 UP Expressway Industrial Development Authority(UPEIDA) of Uttar Pradesh(UP) receives the approval letter of securitisation-based INR 5100 crore loan from the Punjab National Bank (PNB) for building the 594 km long Ganga Expressway Project. The loan was approved at the Lucknow event in the presence of UP Chief Minister Yogi Adityanath and Union Finance Minister Nirmala Sitaraman.
About the Project-
The project’s estimated cost is around INR 36,230 crore about 92% land acquisition work has already been done. It is a part of National Infrastructure Pipeline and National Monetization Pipeline projects.
Highlights