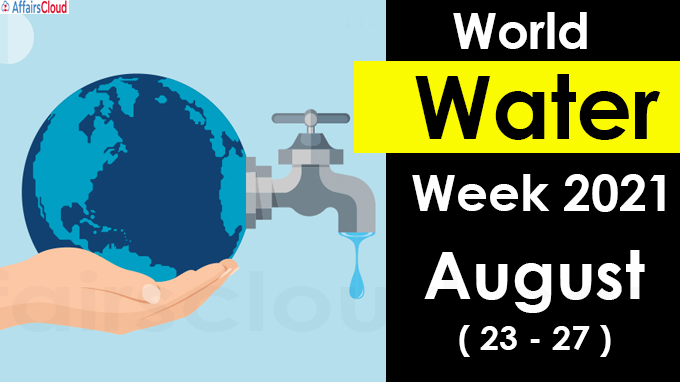 World Water Week(WWWeek) is annually celebrated across the globe in the month of August to address the major water issues across the globe. The WWWeek 2021 is being held as an online event from 23rd to 27th August.

WWWeek has been an annual event organised by Stockholm International Water Institute(SIWI) since 1991.

The theme of 2021 World water Week is “Building Resilience Faster”.

i.The World Water Week in Stockholm, Sweden was started as the Stockholm Water Symposium in 1991.

ii.In 2001, the Stockholm Water Symposium was officially renamed as the World Water Week in Stockholm.

i.Sandra Postel, founding director of the Global Water Policy Project, has been named Stockholm Water Prize Laureate 2021 for her work towards changing the people’s view on water.

ii.Stockholm Water Prize is awarded by SIWI in cooperation with the Royal Swedish Academy of Sciences and presented by the Swedish King H.M King Carl XVI Gustaf, the Patron of the Prize.

Eshani Jha (United States of America) won the Stockholm Junior Water Prize 2021 for her project addressing the issues of water contamination with a cost-effective solution.

Future Kongchu and Thanawit Namjaidee(Thailand) won the Diploma of Excellence for their research to provide a solution to provide moisture retention at the critical point of a plant’s development.

The session was jointly convened by the Safe Water Network, The United States Agency for International Development(USAID) and World Resources Institute(WRI) India.