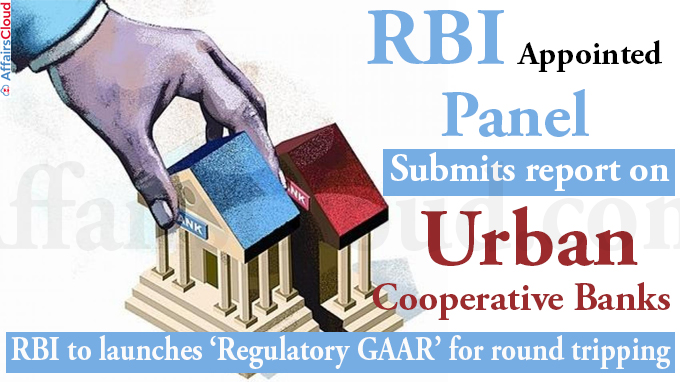 In August 2021, the Reserve Bank of India (RBI) released the recommendation report of the Expert Committee on Primary (Urban) Co-operative Banks (UCBs) under the chairmanship of N. S. Vishwanathan, which was constituted by RBI to review the issues of UCBs and to provide a road map for strengthening the sector.

i.In February 2021, the RBI constituted an expert committee on UCBs under the chairmanship of N. S. Vishwanathan, former Deputy Governor, RBI, to suggest measures to enable faster rehabilitation/resolution of UCBs.

ii.The committee has also been directed to review the Regulatory provisions through the recent amendments to the Banking Regulation Act, 1949 (As Applicable to Cooperative Societies).

Recommendations of the committee over UCBs:

i.To ease the regulatory process, the committee has recommended a 4-tier structure for the UCBs, based on their capital availability and other factors.

iii.The committee also suggested the setting up of an Umbrella Organization (UO) with a minimum capital of Rs 300 crore with Capital to Risk-Weighted Assets Ratio (CRAR) and regulatory framework similar to Non-Banking Financial Companies (NBFCs).

ii.A Tier 3 UCB will be allowed to function on the lines of a Small Finance Banks (SFBs) if it meets both the entry point capital (Rs 200 crore) and the CRAR requirement (15 percent) that are applicable to SFBs.

iii.The Tier 4 UCBs will be allowed to function as a universal bank only if they meet the 9 percent capital adequacy ratio and Rs 500 crore of entry point capital requirement.

ii.It recommended the inclusion of twin indicators viz, CRAR and Net NPA (Non-Performing Assets) under the Supervisory Action Framework (SAF) to reducing the time spent by a UCB under SAF.

RBI Plans to Include GAAR Regulations for Round-Tripping

RBI has made changes in the existing regulation of foreign investment and released the draft rule to discourage round-tripping.