Government forms 11 Committees to drive India to a Circular Economy 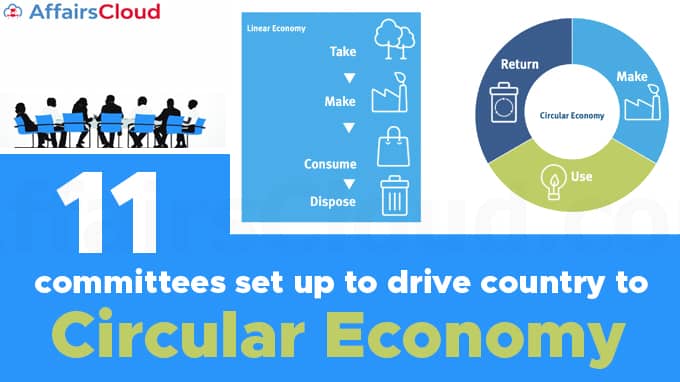 NITI Aayog has stated that in order to expedite the Transition of India from a Linear Economy to a Circular Economy, Government has formed 11 Committees for 11 focus areas. 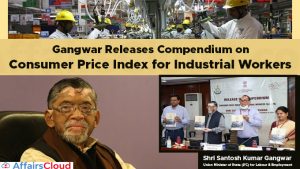 On 18th March 2021, Santosh Kumar Gangwar, Minister of State (Independent Charge), Ministry of Labour and Employment Released Compendium on Consumer Price Index for Industrial Workers(CPI-IW) (Volume I-IV, 1945 to 2020) which will be helpful for Researchers, Policy makers and Students.

What is Consumer Price Index for Industrial Workers(CPI-IW)?
CPI-IW is an economic indicator that measures the change in price of goods and services consumed by the indexed populations.
Key Points:
i.The Compendium contains detailed and comprehensive information and explanations on compiling consumer price index (CPI).
ii.The Compendium was formed by compiling the data in the form of Index from 1945 to till date.
iii.It Provides a comprehensive details of Key Concepts, definitions, methodology & the Index numbers compiled for CPI-IW.
Composition of Compendium:
i.The information ranges from interim series of 1944 and 1949 to 1960 to 1982 and to the latest gone by series of base 2001 for the period January 1945 to August 2020.
ii.The first volume has chapters related to interim series and index data on base 1944 and 1949 for the period January 1945 to March 1954 and for April 1954 to July 1968, respectively.
iii.The second volume provides index data on 1960 series for the period August 1968 to September 1988.
iv.The third and fourth volume give similar information on base 1982 for the period October 1988 to December 2005 and on base 2001=100 for January 2006 to August 2020.
Benefits of Compendium:
Digitization of historical data on CPI-IW (consumer price index for industrial workers) in the shape of compendium will bridge the data gap on the subject and will be an inspiration to other agencies.
What is CPI?
i.CPI is an index measuring retail inflation in the economy by collecting the change in prices of most common goods and services used by consumers.
ii.In India, there are four consumer price index numbers, which are calculated, and these are as follows:  CPI for Industrial Workers (IW) CPI for Agricultural Labourers (AL) CPI for Rural Labourers (RL) and CPI for Urban Non-Manual Employees (UNME).
iii.Ministry of Statistics and Program Implementation collects CPI (UNME) data and compiles it, the remaining three are collected by the Labour Bureau in the Ministry of Labour. 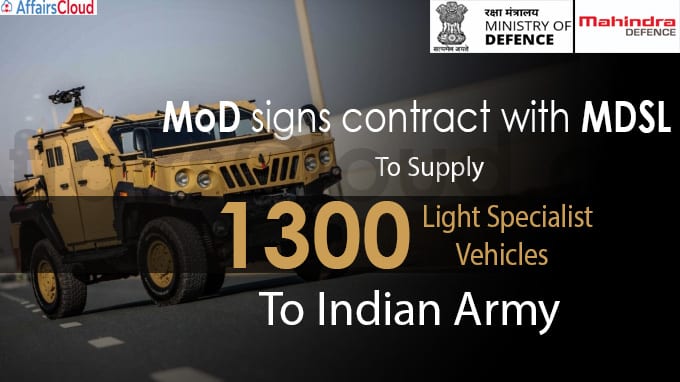 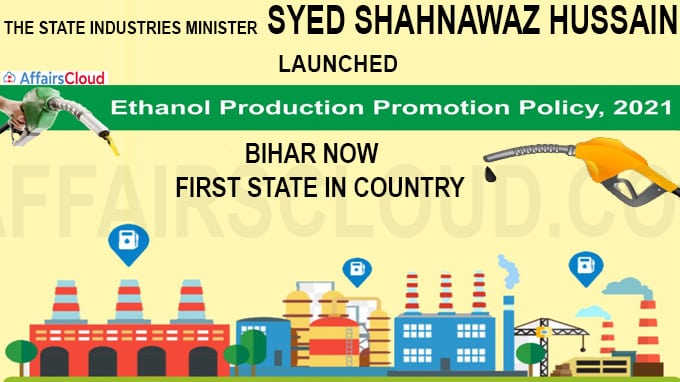 Bihar Cabinet has approved the state’s own Ethanol policy called ‘Ethanol Production Promotion Policy, 2021’.  The approval has made Bihar as the 1st State in India to implement Ethanol Promotion Policy under the National Policy of Biofuels, 2018. 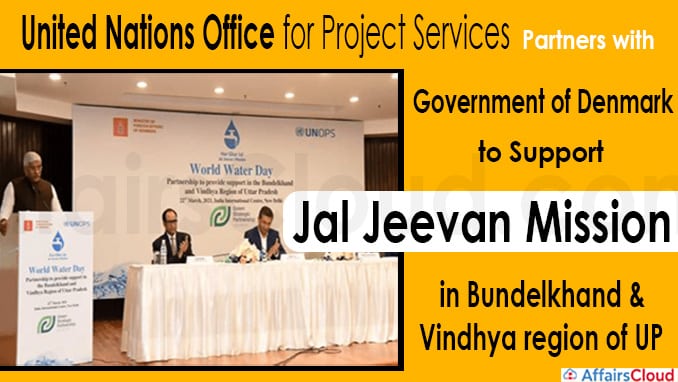 On 22nd March 2021, the World Water Day, Government of Denmark and the United Nations Office for Project Services (UNOPS) entered into a partnership to provide strategic technical support for implementing Jal Jeevan Mission in Uttar Pradesh. 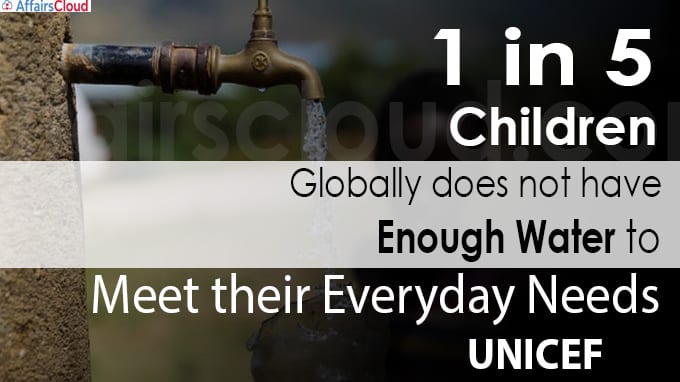 According to the report  ‘Reimagining WASH:Water Security For All’ released by UNICEF (United Nations Children’s Fund), globally more than 1.42 Billion people, including 450 million children live in areas of high, or extremely high, water vulnerability. 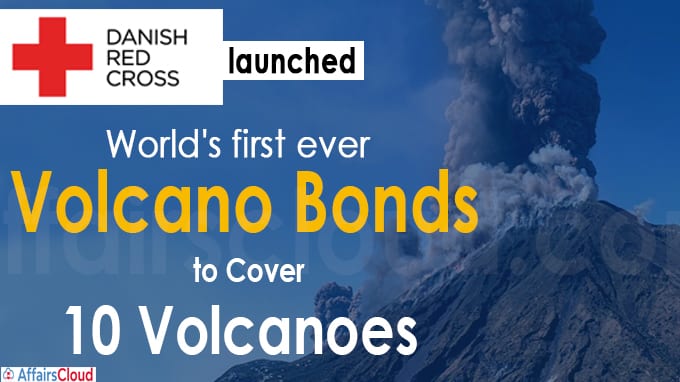 On March 22, 2021, The Danish Red Cross, Denmark’s branch of the Red Cross has sponsored and launched the world’s first Catastrophe Bond (cat bond) for Volcano-related disasters with the support of several financial firms.

Key Points about the bond: On March 22, 2021, the Reserve Bank of India(RBI) set up a five-member Standing External Advisory Committee (SEAC) which is headed by former RBI Deputy Governor Shyamala Gopinath, for evaluating applications for universal banks and small finance banks(SFBs).
Key points about the committee:

Facilities used by RBI for the printing of notes: The Union government conferred Gandhi Peace Prize to the Late Sultan Qaboos bin Said Al Said of Oman for the year 2019 and to Bangabandhu Sheikh Mujibur Rahman, for the year 2020. 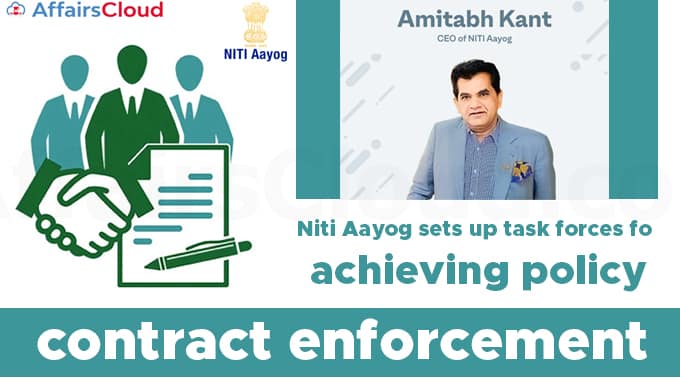 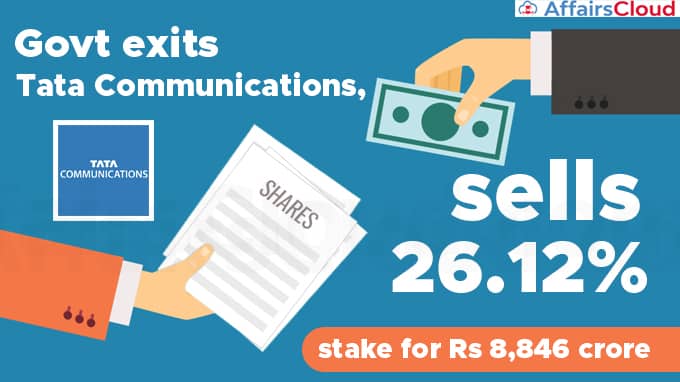 On March 22, 2021, The department of investment and public asset management (DIPAM) reported that the government has fully exited from Tata Communications Ltd (TCL), a part of the Tata Group, through the sale of its outstanding 26.12% stake in it for ₹8,846 crores.

Disinvestment target of the Government:

Proceeds of the sale in TCL:

In March 2021, CA Rover Holdings, an US based private equity funds sold 4% of its current stake holdings in SBI Cards & Payment Services worth Rs 3728 crore. CA Rovers Holdings previously held 15.86% stake in SBI Cards, even after the sale it holds 11% stake, currently valued at Rs 10,574 crore. The sale comes after 4 years of profiting nearly 970% returns.

Former Chairperson of SEBI, G V Ramakrishna passed Away at 91 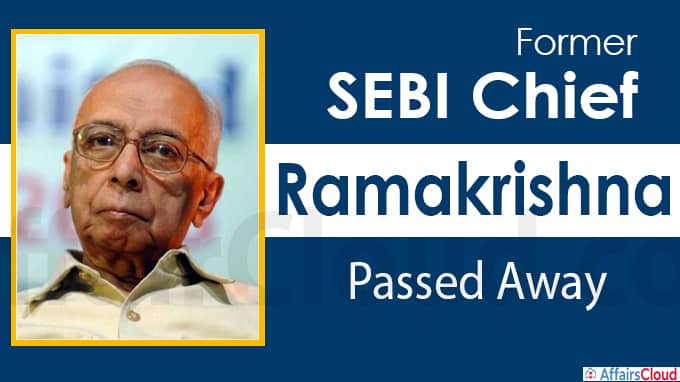 On 20th March 2021, G V Ramakrishna, former chairperson of Securities and Exchange Board of India (SEBI), a market regulator of India passed away at the age of 91 in Chennai, Tamil Nadu. He was born in 1930, in Bengaluru, Karnataka.
G V Ramakrishna was a 1952 batch IAS officer from Andhra Pradesh cadre.
About G V Ramakrishna:
i.He became the first Chairman of Disinvestment Commission in 1996 and managed the exit of the government from state-owned businesses.
ii.He served as the Chairman of SEBI from 1990 to 1994 during which he supported the banning of the badla stock trading system.
iii.He was an Adviser in the Planning Commission in 1981 and Member in 1994.
iv.He has also served as India’s Ambassador to the European Economic Community (European Union) in 1989.
v.He served as the minister of financial affairs in the Embassy in Washington in 1972.
vi.He has also worked under various ministries including Finance, Industry, Steel, Coal and Petroleum. 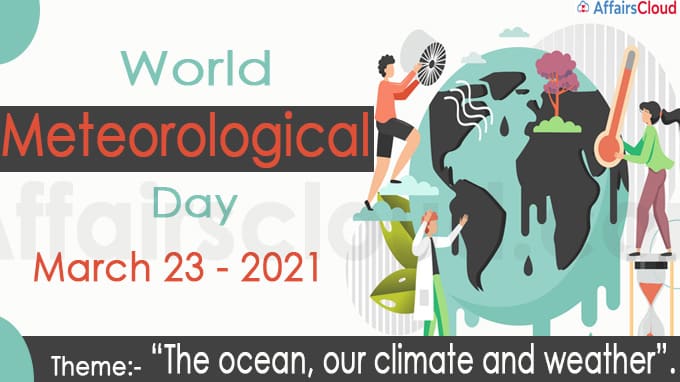 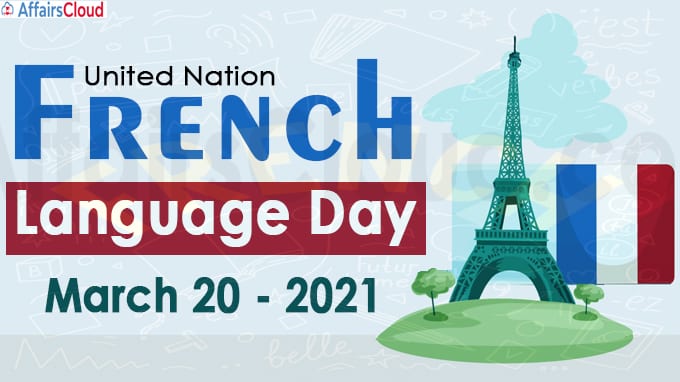 i.The United Nations(UN)’s French Language Day is annually observed across the globe on 20th March to create awareness among the international community about the history, culture and use of the French language. The UN annually celebrates the 6 language day for the 6 official languages of the UN, Arabic, Chinese, English, French, Russian and Spanish.
ii.The day is recognised by the International Organization of La Francophonie  (OIF) as the International Day of La Francophonie.
iii.The theme of French Language Day 2021 is “Francophone Women, Resilient Women”.
iv.The 20th March marks the creation of the Agency for Cultural and Technical Cooperation (ACCT).
About the United Nations:
Secretary-General– Antonio Guterres
Headquarters– New York, United States of America
<<Read Full News>>

i.On 17th March 2021, the Government of Jharkhand launched the SAAMAR (Strategic Action for Alleviation of Malnutrition and Anemia Reduction) campaign to tackle acute malnutrition in children and women in the state.
ii.The SAAMAR campaign is launched with a target of 1000 days, under which an annual survey will be conducted to track the progress.
iii.For the implementation of the SAAMAR campaign a provision of Rs.1 lakh will be given to every panchayat.
iv.According to the National Family Health Survey-4 data, every 2nd child in Jharkhand is stunted and underweight, every 3rd child is affected by stunting and every 10th child is affected from severe wasting and around 70% of children are anaemic.
About Jharkhand:
Chief Minister– Hemant Soren
National Park– Hazaribagh National Park, Betla National Park
<<Read Full News>> 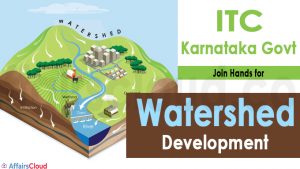 i.Government of Karnataka signed an Memorandum of Understanding (MoU) with ITC to execute a Watershed Programme covering over one million acres in the southern state. The Programme will be in effect for 3 years.
ii.The MoU was signed under the ITC’s Social Investments programme ”Mission Sunehra Kal” & the Karnataka Watershed Development Department.With regard to this MoU, 100 Watershed had set up.
iii.The agreement was a part of the Karnataka government’s ‘Watershed development for drought proofing’ programme & it is a part of ITCs Sustainability 2.0 agenda.
iv.It aims at covering 1.16 million acres of watershed area in 29 districts.
About Karnataka:
National Parks – Bannerghatta National Park, Bandipur National Park, Nagarhole National Park, Kudremukh National Park.
Lake – Hirekolale Lake, Ayyanakere Lake, Honnamana Kere Lake.
<<Read Full News>>