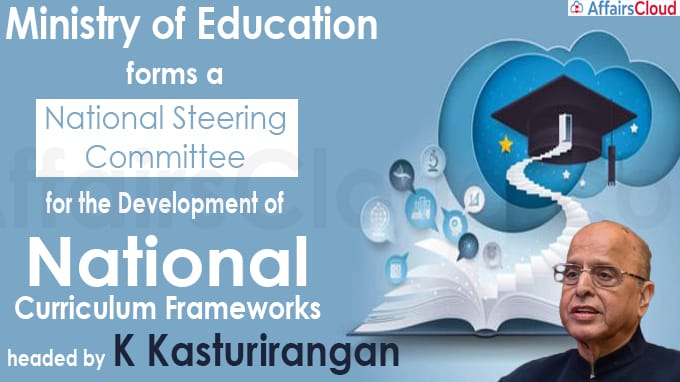 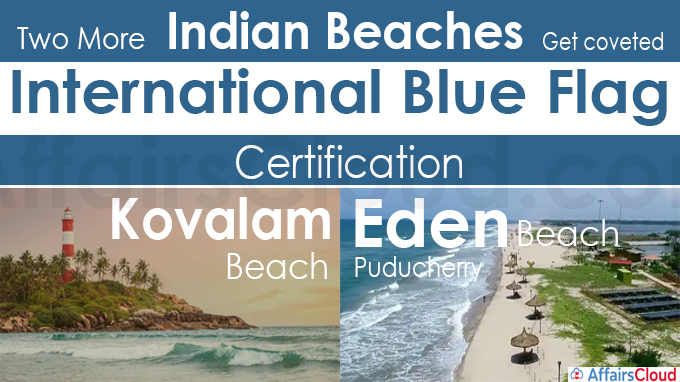 Two more new Indian beaches– Kovalam in Tamil Nadu and Eden in Puducherry received Blue Flag Certification from Foundation for Environment Education in Denmark (FEE) in 2021.With this ,India received a Blue tag for 10 beaches.

About Blue Flag Certificate
i.The Blue Flag is one of the world’s most recognised voluntary awards for beaches, marinas, and sustainable boating tourism operators.
ii.It is issued by Foundation for Environment Education in Denmark (FEE) and international jury comprising of members from IUCN, UNWTO, UNEP and UNESCO etc.
iii.It started in 1987 and in 2001 European Blue Flag became International Blue Flag .
>>Read Full News How does CCU Technology work?
This facility extracts the CO2 directly from the Blast Furnace gas through amine-based technology. Then the depleted CO2 is sent back to the gas network with increased calorific value.

Prime Minister(PM) Narendra Modi inaugurated two state-of-the-art and energy-efficient Defence Offices Complexes at Kasturba Gandhi Marg and Africa Avenue in New Delhi.
The new complexes were constructed using new and sustainable construction technology known as LGSF (Light gauge steel frame).
The complexes were constructed by the Ministry of Housing and Urban Affairs with resources allocated by the Defence Ministry and have an office space of 9.60 Lakh square feet. 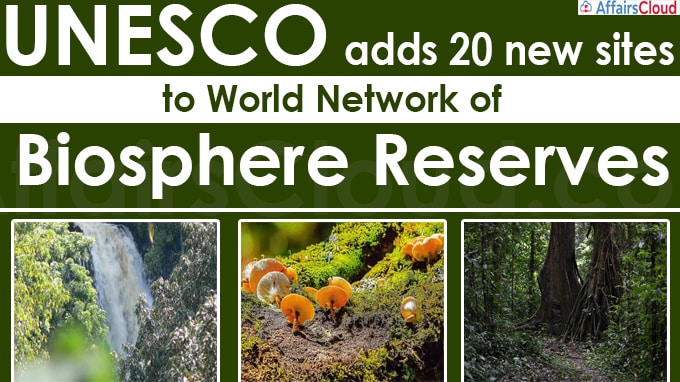 i.The 33rd session of the International Co-ordinating Council of the UNESCO’s (United Nations Educational, Scientific and Cultural Organization) MAB (Man and the Biosphere) Programme (MAB-ICC) was held in a hybrid format on September 13-17, 2021 in Abuja, Nigeria.
ii.This was the first time that it was held in the African continent.
iii.During the programme, 20 new sites in 21 countries were added to the World Network of Biosphere Reserves (BRs).
iv.The sites from Lesotho (Matseng BR), Libya (Ashaafean BR) and Saudi Arabia (Juzur Farasan BR) are designated for the first time.
About United Nations Educational, Scientific and Cultural Organization (UNESCO):
Establishment– 1945
Director-General– Audrey Azoulay
Headquarters– Paris, France
>>Read Full News In September 2021, Iran was appointed as the 9th permanent member state of the Shanghai Cooperation Organization (SCO) at the 21st Meeting of the SCO Council of Heads of State in Dushanbe, Tajikistan.

i.It is a permanent intergovernmental international organisation formed on 15 June 2001 in Shanghai (China). It is the successor of Shanghai Five, a mutual security agreement formed in 1996 between China, Kazakhstan, Kyrgyzstan, Russia, and Tajikistan. 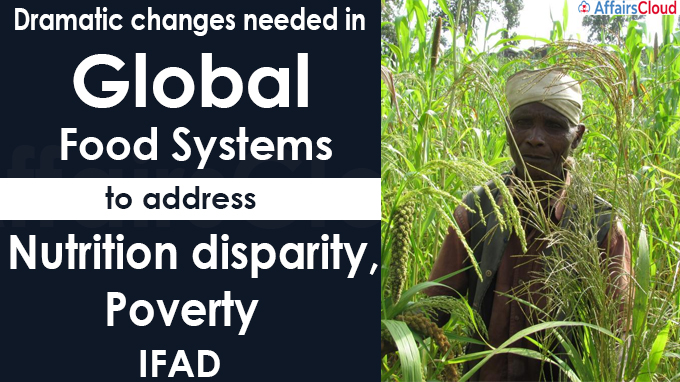 To resolve the global issue of Nutrition disparity, Countries should invest more on nature-based farming and providing incentives to small & medium scale farmers will play critical role in reducing rural poverty & increasing nutrition security, as per the ‘Rural Development Report 2021’ released by United Nations International Fund for Agricultural Development (IFAD), named “Transforming Food Systems for Rural Prosperity”.
i.Small-scale agriculture is directly linked with the livelihood of the majority of rural population across the globe, with over 31% of the World’s food being produced in farms sized up to 2-hectares.
About International Fund for Agricultural Development (IFAD):
President – Gilbert F. Houngbo
Established – 1977
Headquarter – Rome, Italy
>>Read Full News 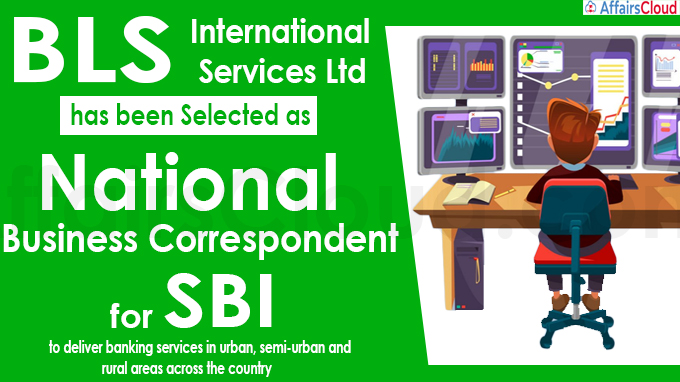 BLS International Services Ltd was selected as the National Business Correspondent (BC) for the State Bank of India (SBI) to deliver banking services in urban, semi-urban and rural areas across India. In its Economic Outlook, Interim Report September 2021, the Organisation for Economic Co-operation and Development (OECD) has reduced India’s Gross Domestic Product (GDP) growth forecast in FY22 to 20 basis points to 9.7 percent and for FY23 the GDP growth forecast was reduced by 30 bps to 7.9 percent. As per the latest economic outlook of Asian Development Bank (ADB) titled ‘the Asian Development Outlook 2021 Update Transforming Agriculture in Asia’, India’s Gross Domestic Product (GDP) growth forecast for FY2021-22 was reduced to 10 percent from its earlier projection of 11 percent (April 2021) due to the impact of COVID-19. 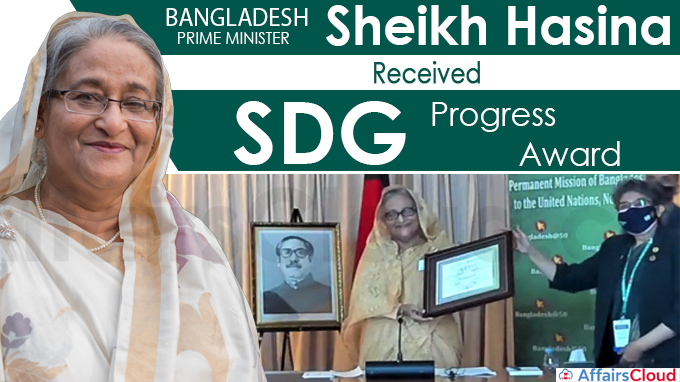 Canadian Prime Minister(PM) Justin Trudeau, leader of the Liberal party since 2013, won 3rd term as the PM of Canada by winning the 2021 Canadian federal election but failed to secure the absolute majority.

Note:
17 Indian origin Canadians including New Democratic Party (NDP) leader Jagmeet Singh and Defence Minister Harjit Sajjan have won the election.
About Justin Trudeau:
i.Justin Trudeau has been serving as the Prime minister of Canada since November 2015, he became the 2nd youngest PM in Canadian history after Joe Clark.
ii.As the son of former Prime Minister Pierre Trudeau, Justin Trudeau became the first to be the child or other relative of a previous PM to hold the post.
iii.He was re-elected as the PM of Canada in 2019 and again in 2021.
Parliament of Canada:
i.The parliament of Canada, the federal legislature of Canada, located at Parliament Hill in Ottawa consists of 3 parts, the Monarch, the Senate, and the House of Commons.
ii.The parliament consists of 443 seats which include 338 Members of Parliament(MP) elected by the people and 105 senators, appointed by the Governor-General to represent regions of the country.
About Canada:
Prime Minister– Justin Trudeau
Capital– Ottawa
Currency– Canadian Dollar

V R Chaudhari appointed as the next Chief of Air Staff 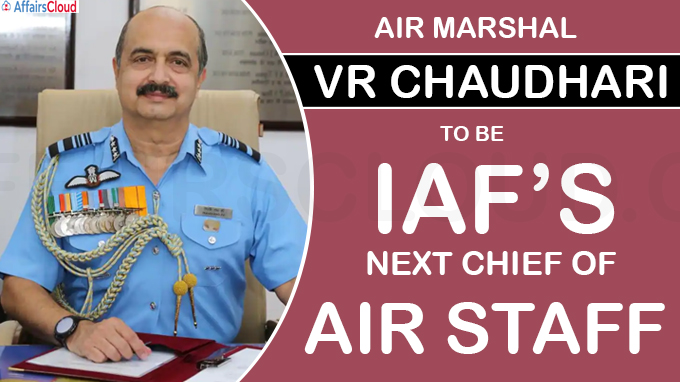 The Air Marshal, Vivek Ram (VR) Chaudhari has been appointed as the Chief  of the Indian Air Force (IAF). He will  succeed  the current Chief of Air Staff Air Chief Marshal Rakesh Kumar Singh Bhadauria (RKS Bhadauria), who will retire on September 30, 2021.
About  Vivek Ram (VR) Chaudhari
i.Currently, he is serving as the Vice Chief of Air Staff after the retirement of  Air Marshal H S Arora. He has also served as Chief of the Western Air Command (WAC).

ii.He is an expert in major MiG-29 fighter aircraft and has experience of flying for more than 3800 hours on fighter and trainer aircraft, including missions flown during Operation Meghdoot, the Air Force’s support to capture the Siachen glacier in the 1980s, and Operation Safed Sagar (the support provided by the IAF during the Kargil conflict in 1999).

Govt extends Kotak’s tenure as board member of IL&FS 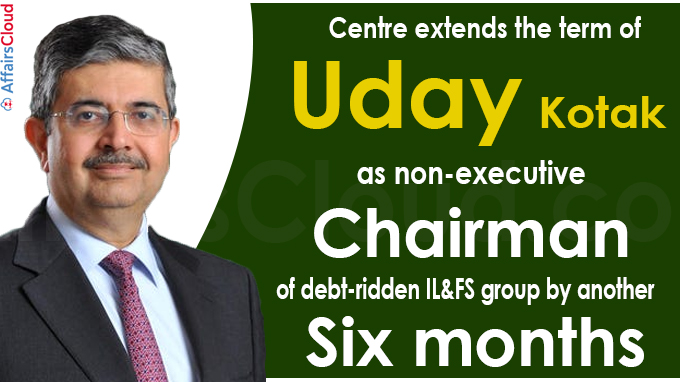 Union government has extended the term of Uday Kotak as the non-executive chairman of Infrastructure Leasing and Financial Services (IL&FS) by another six months. His tenure was supposed to expire on October 2, 2021.

Banking Regulation Act, 1949
i.The Act prohibits a banking company to be managed by an individual who is a director of any other company. However, the provision does not apply for a temporary period not exceeding three months or such further period not exceeding nine months if allowed by the Reserve Bank of India (RBI).
ii.RBI allowed Kotak to be on the board of IL&FS for three months, and for another nine months subsequently. He was further given two extensions of one year each. Howzat Fantasy Sports Platform, a product of Junglee Games has signed former Indian international cricketer Suresh Raina as its brand ambassador to promote its brand among sports lovers across India.

Howzat fantasy sports platform launched in 2019 is owned and operated by Howzat Private Limited.
About Suresh Raina:
i.Suresh Kumar Raina from Ghaziabad, Uttar Pradesh is known as the first Indian cricketer to score a hundred in all three formats of the game.
ii.He is the 3rd Indian batsman in the world and the first Indian to hit a century in T20.
iii.He has represented Chennai Super Kings and Gujarat Lions(captain) in the Indian Premier League (IPL) matches. 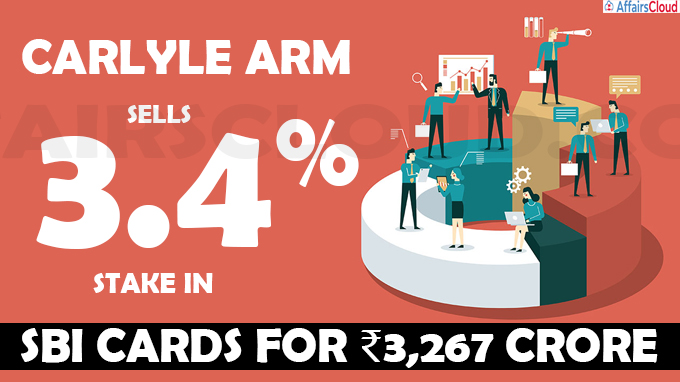 CA Rover Holdings, a United States(US)-based private equity fund, has sold 3.2 crore shares amounting to a 3.4% stake in SBI Cards, for 443 million USD (around Rs 3267 crore).
CA Rover Holdings is a part of the Carlyle Group and an affiliate of Carlyle Asia Partners. 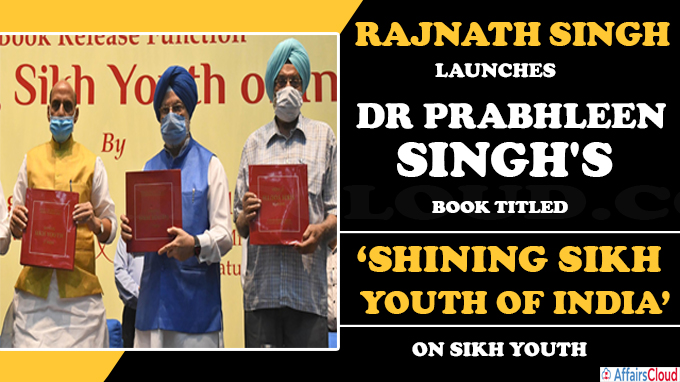 Defence Minister Rajnath Singh released a book titled ‘Shining Sikh Youth of India’, in New Delhi, authored by Dr Prabhleen Singh, as part of the commemoration of the 400th birth anniversary of Guru Tegh Bahadur, the 9th Guru of Sikhs.

About Dr Prabhleen Singh
i.He is an administrative officer at the Punjab University, Patiala
ii. Earlier, he has written two books, namely 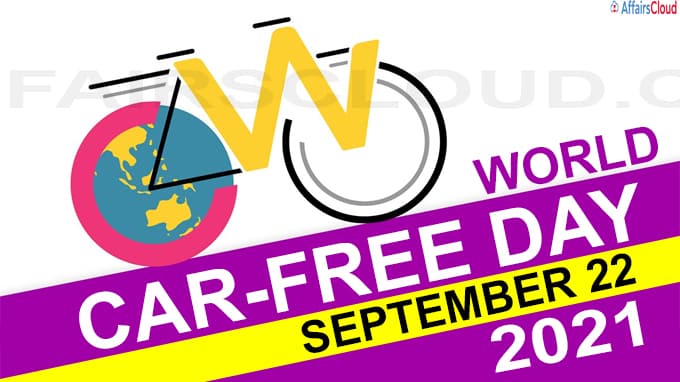 World Car Free Day is annually observed across the globe on September 22 to encourage motorists across the globe to give up on their vehicles for a day and experience streets free of motor traffic.
The day also highlights the benefits of going car-free and adopting Alternative transportation such as walking, biking, public transportation, hybrid vehicle travel, and carpooling.
Background:
i.The Carfree days were observed in several European cities during the early 1990s.
ii.In Europe, International Car-free Day, a pilot project for the European Union’s “In Town Without My Car” was organised in 1999.
iii.The Carbusters (now World Carfree Network) and Adbusters Media Foundation launched and promoted the first Global Car-free day in 2000.
>>Read Full News World Rose Day is annually observed across the globe on September 22 to honour and provide hope for the people who are suffering from cancer. The day also aims to create awareness about early identification and prevention of cancer, which can save much Malignancy.
Background:
World Rose Day was first observed to honour the memory of Melinda Rose, a 12-year-old cancer patient who died in 1996 due to Askin’s Tumour, a rare form of blood cancer.
Significance of Rose Day:
i.Rose Day is celebrated as a ray of hope for cancer patients who are suffering from the physiological implications along with stress, psychological impact, and anguish caused by cancer.
ii.On this day people across the globe exhibit their love and support for the patients suffering from cancer and the caregivers. 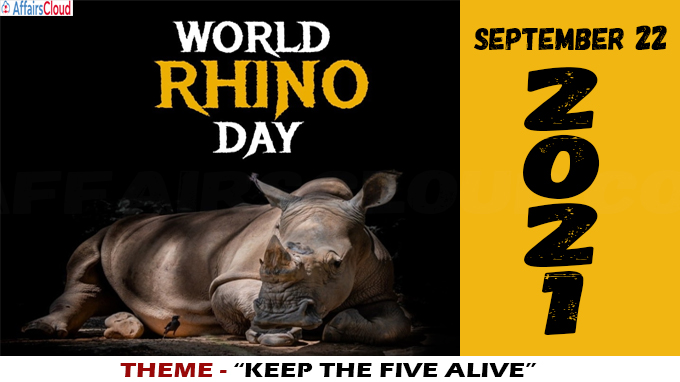 World Rhino Day is annually observed across the globe on September 22 to create awareness about all five species of rhino and recognise the efforts taken towards the conservation of rhinos.
The 5 species are Sumatran rhino; Black Rhino; Greater one-horned rhino; Javan rhino and White rhino. 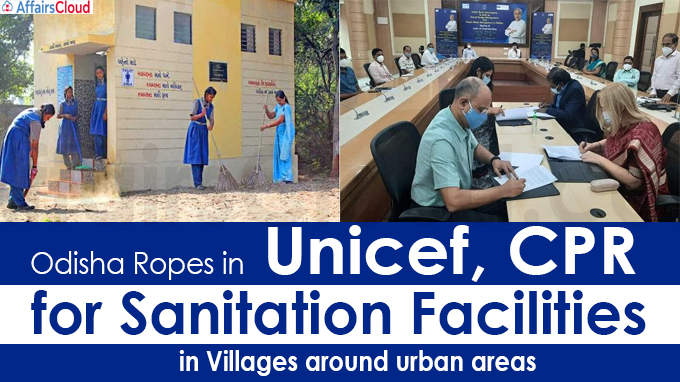 The department of Housing and Urban Development (H&UD) and the Panchayati Raj and Drinking Water (PR&DW), under the government of Odisha, signed a Letter of Understanding (LoU) with UNICEF (United Nations International Children’s Emergency Fund) and Centre for Policy Research (CPR) for urban-rural convergence on Faecal Sludge and Septage Management (FSSM) and Plastic Waste Management (PWM) to provide sanitation facilities in villages around urban areas of the state.