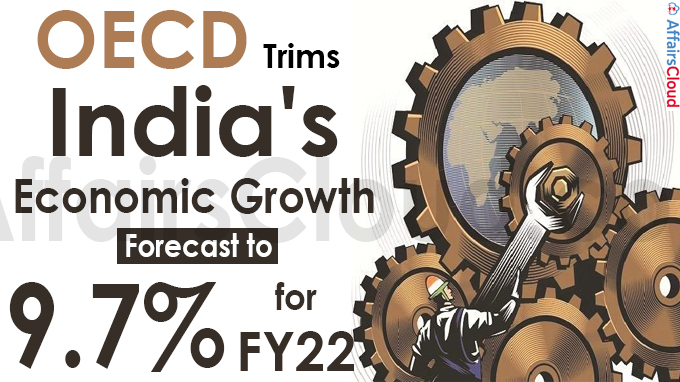 In its Economic Outlook, Interim Report September 2021, the Organisation for Economic Co-operation and Development (OECD) has reduced India’s Gross Domestic Product (GDP) growth forecast in FY22 to 20 basis points (bps) to 9.7 percent and for FY23 the GDP growth forecast was reduced by 30 bps to 7.9 percent.

i.OECD reported large differences among the nations in the vaccination rate and the economic recovery.

ii.The consumer price inflation in India was 6.2 percent in FY21.

iii.The output shortfall in the G20 emerging-market economy at the end of 2022 is projected to be twice that in the median G20 advanced economy, particularly high in India and Indonesia.

v.As per the High-frequency activity indicators such as Google location-based measures of retail and recreation mobility, the Indian market is continuing to rebound from its pre-pandemic levels.

About Organisation for Economic Co-operation and Development (OECD):